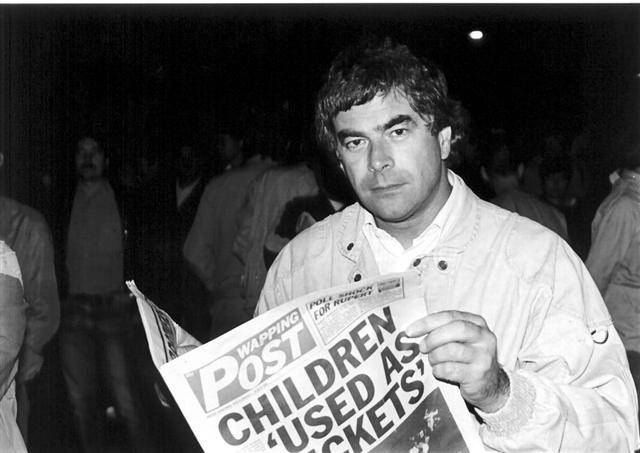 In response to Alan Woods' review of "Strike- When Britain Went to War", we are publishing this article by a Comrade who played a major role in the printers' struggle that carried on from the miners' strike.

I would like, if I may, to add a footnote to the review by Alan Woods of "Strike: When Britain went to war". My feelings watching the programme went from anger to depression and back to anger. But as we used to say quite often during those days, "Don't get angry, get even". The review hits the nail right on the head, the programme was made because it looks more certain every day that we are going to get even quite soon. And because as Alan Woods says the representatives of big business want to convince young workers that struggle is hopeless.

At the time of the miners strike of 1984 I was a member of the Fleet Street branch of the AEEU and Chairman of the Times Newspapers engineers chapel. Our branch and chapel (workplace organisation) actively supported the miners during their strike. Many workers on the national press understood that the miners were fighting a battle on our behalf too. Some of my members were conned by the media picture of the miners as the aggressor. It is interesting that one of the Welsh miners on the programme referred to older miners who did not run from the police onslaught. They did not believe that the police would attack them with such venom. Many of my chapel members thought this way too. The first time that we were attacked at Wapping a good number of the older men stood their ground saying, "They won't attack us if we are peaceful". Often followed by saying to an officer, "Hold on there, you can't do that to me." As they were shoved, bowled over or whacked by a uniformed thug.

The thing about the printers was that they were a conservative group of people. They had relatively high pay and better working conditions than most workers did. They were not about to make a revolution but they knew very well that their position depended completely on their trade union and particularly chapel organisation. The chapel leaders and most of the members recognised that a defeat of the miners would open up a general assault by the Thatcher regime on all organised workers. When the chapel at The Sun refused to carry the fabricated 'Hitler salute' picture of Arthur Scargill, the battle lines were drawn. 'Those bastards are next', was the cry of the Thatcherites. What about that porn merchant Kelvin McKenzie trying to portray a printer on the programme! He only played himself in his attempt to depict a chapel official. There were some people like that in Fleet Street but they were the ones who scabbed and became managers after our defeat.

The lie told by McKenzie and others of his ilk was that Fleet Street workers would not accept new technology. New technology was not the issue but how that new technology would be used. It was estimated in the eighties that with new technology everything printed in Britain could be produced with less than half the labour. So which way would it go? Either a 20 hour week or half the workforce on the dole! It was clear which way the press barons would go. The last thing the bosses at News International wanted was an agreement with the chapels. They wanted to end forever their having to reach agreements. They wanted to dictate, or as it is put by the mealy-mouthed, have 'management's right to manage'. A story, which may be apocryphal, went the rounds. One of Murdoch's managers had reached an agreement with a small chapel. It seems that this chapel had rolled over and played dead to get a deal. The manager went to his bosses and said, 'I've got a deal'. The boss said, 'Well, you had better go and fuck it up then'. The offending manager, a former chapel official, was later reported to have, 'Waved McKenzie in the air in a Wapping office!!

Talks had taken place at The Sun and the News of the World about a move from Fleet Street to the new plant in Wapping. The engineers chapel had been involved in planning the move. They had produced a book detailing all of the equipment and its maintenance requirements. They fully expected to go to Wapping. No talks had taken place with chapels at The Times and Sunday Times. Completely out of the blue the first paper to be printed in Wapping was a supplement to The Sunday Times. At this time I was Father of the Chapel for the Times Newspapers engineers. I was sent to our production manager to ask for talks. He refused. We went on strike. Our strike too, like the miners, was a defensive struggle. Like them we had the full force of the state thrown against us. Like them in spite of a heroic struggle we were beaten. Our defeat led to the general collapse of union organisation in Fleet Street. After this not only the Tory Daily Telegraph but also the supposedly liberal Observer and Guardian, began a campaign of bullying against their workers. This is to say nothing of the regime at the Labour-supporting Mirror, both with and without pension thief Bob Maxwell.

Engineers were enraged by the role of the EEPTU in recruiting and training scab labour for Wapping. They felt angry at the almost total lack of support from their own AEEU. They were appalled by the weakness of someone like SOGAT leader Brenda Dean. She had the nerve on the programme to pour scorn on a fighter like Scargill. They were enraged by the outright betrayal of their leaders in joining what was seen as the organisation largely to blame for the Wapping strike. Many of our best fighters left the union. What is happening to the AEEU/EEPTU/AMICUS now shows that even the most apparently corrupt and useless workers' organisations can be renewed. Where else can we go? Should we start all over again building new unions? Just to ask the question shows what nonsense that would be. The men and women now rebuilding AMICUS are not weighed down by past defeats but are seeking to deal with the challenges of today.

After the 1987 defeat most of my brothers and sisters looked to a Labour victory as the way ahead. A Labour Government would get rid of the anti-union Tory laws. Often fellow workers would scold me for banging on about the Blairites. 'We must get rid of the Tories.' Even after the disappointments of the first term they were saying that we should hang on and hope for the best.

Now with the failure to get rid of anti-union laws, the support for privatisation, the war, the outrageous treatment of fire fighters and post workers, things are beginning to change. Once again new layers of workers are turning to their unions. One lesson at least they can learn from the miners and the printers. Use your unions to regain your Labour Party. Stop the nonsense of MP's you support backing policies, like PFI, which your union opposes. Running off and forming new parties is just as barmy as trying to set up new unions. The tiny clique at present controlling our Party will not be hard to shift.