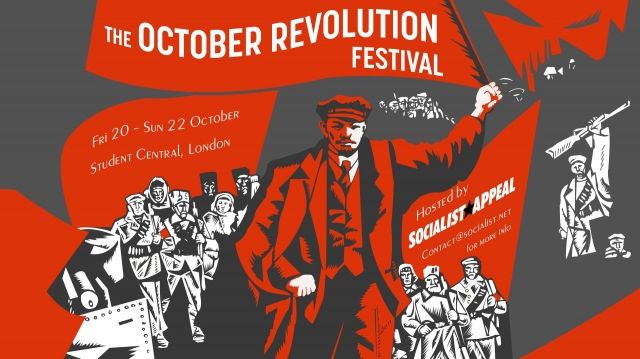 Socialist Appeal (British section of the International Marxist Tendency) will hold its October Revolution festival in one week. Don't miss out on this incredible celebration of Marxist ideas on the centenary of the Russian Revolution.

In one week's time, starting next Friday (20th October), hundreds of Marxist activists from across Europe will gather for the October Revolution festival in London. Don't miss out! Join the revolution! Book your ticket now!

We are excited to publish here the final weekend schedule for the festival, taking place between 20-22 October. This promises to be an amazing weekend of radical discussion on current events, theory, and history.

In particular, we are delighted to welcome Leon Trotsky's grandson, Esteban Volkov, who will be joining us via video link at the opening rally on Friday 20th October to discuss the significance of the Russian Revolution, 100 years after the Bolsheviks led the working class to power in 1917.

Esteban will also be introducing the new documentary by the International Marxist Tendency about the life and ideas of Trotsky, which will be premiered at the opening rally.

On the Saturday evening, we are also proud to be addressed by Steve Hedley, the Senior Assistant General Secretary of the RMT union, and Danielle Tiplady, a leading nurse activist, who will be discussing the Corbyn movement and the fight to kick out the Tories.

Elsewhere, we have also introduced a new session on the Sunday afternoon, with Jorge Martin of the IMT discussing the gigantic events and mass movement in Catalonia.

Alongside these inspiring rallies, we have a whole weekend of incredible talks and discussions on offer, with three parallel sessions taking place at any one time, offering a range of topics on philosophy, history, economics, politics, art, and much much more.

Check out the full schedule below (with links to recommended reading) and book you ticket now!

7pm - 9.30pm - Rally for the Russian Revolution - with guest speakers Esteban Volkov (Leon Trotsky's grandson, via video link) and Alan Woods (author of Bolshevism: the Road to Revolution, and the premier of the new IMT documentary about the life and ideas of Trotsky.

Fascism and the far-right - Marie Frederiksen (Upper Hall)
What is a revolution? - Ben Gliniecki (Room 3D)
History of the Troubles in Ireland - Gerry Ruddy (Room 3C)