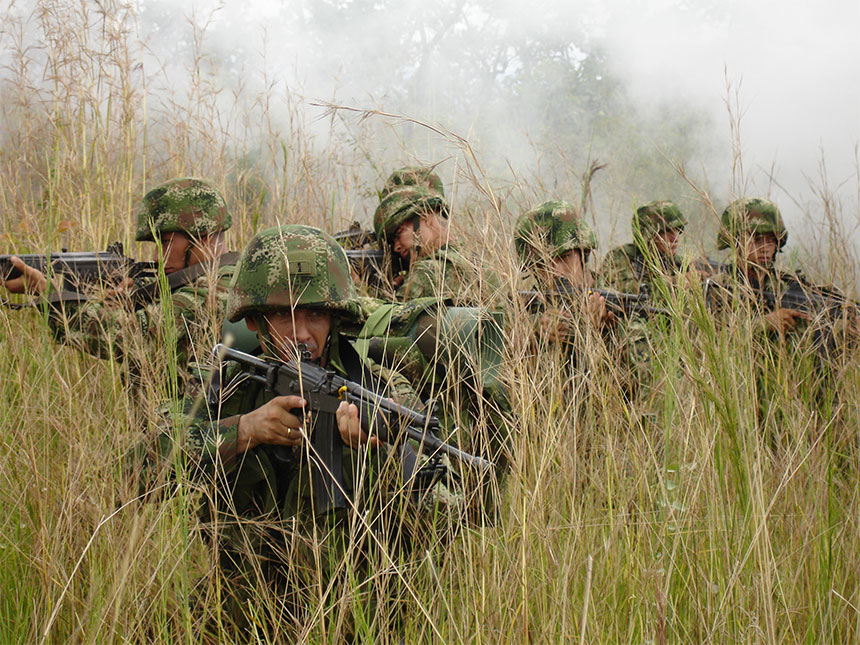 As workers and trade unionists continue to be attacked by the Colombian state, we look at the involvement of Britain in assisting in this murderous process.

In March 2005, three trade unionists were snatched from the shanty towns of Bogotá, Colombia, by soldiers of the High Mountain Battalions. Taken to the outskirts of the city, the three were beaten, castrated and then shot. Their bodies were then dressed in the uniform of the Revolution Armed Forces of Colombia (FARC) in order to disguise their murder as part of routine combat operations.

Since then such incidents have been repeated many times over. Colombia has the highest death rate for trade unionists in the world, with over 2,500 union members having been murdered over the past 15 years. Over 41 met their deaths in 2008 alone.

Many of these atrocities are carried out by the Colombia army in conjunction with paramilitary death squads. In what might seem surprising to some, it would also appear that such forces have been receiving military aid from the British government since the 1980s.

In late 2008, the Justice for Colombia (JFC) campaign published a report on British involvement in the Colombian military. The document alleges the UK’s status as “reportedly the second largest donor of military aid to Colombia” and describes its relationship with the High Mountain Battalions, who have a “history of involvement in the torture and murder of trade unionists”.

“There is not one reason for the UK’s involvement but a set of reasons, one of these being economic...The two biggest foreign companies operating in Colombia are both British, those being British Petroleum and SAB Miller – the brewing company - whose presence is much larger than the American and Spanish multi-nationals currently investing there."

The government has been under pressure for the past several years to distance itself from the Colombian army out of fear that military assistance could lead to further human rights abuses.

And there is no shortage of said abuses. Like much of Latin America, over 65% of the population of Colombia live below the poverty line, with foreign corporations eagerly taking advantage of cheap labour and trade union repression.

The gentle dictates of the world market have ensured Colombia’s status as a neo-colony. The nation now imports over 70% of its foodstuffs from abroad, something which has led to backbreaking poverty for the country’s remaining peasantry. In desperation these destitute farmers often become involved in the drug trade in order to make ends meet, in the process falling prey to criminal elements active nationwide.

The plight of Colombian workers and peasants has not gone unnoticed however. For some time trade unions in Britain and Ireland in particular have been attempting to put pressure on the UK government to cut its military aid programs.

Such efforts appeared to bear fruit last March when the government declared it had disbanded its training scheme. After some initial optimism, JFC believes that that the training regimes – some of which are thought to involve the SAS – are continuing.

“What we saw very recently was the dropping of the two less offensive parts of the aid, those being operations regarding human rights training and the clearing of land mines. The Foreign Office then claimed that they had stopped a large part of their aid to Colombia.

But really this only made up a tiny minority of what aid was being received. The counter insurgency training – or counter narcotics as they are calling it now – continues.”

According to Bob Ainsworth, MP for Coventry North East and Minister of State for the Armed Forces, the government keeps “a record of Colombian security force personnel who have received UK training in Colombia for future monitoring purposes, including any accusations of human rights abuses” and that “to date, there have been no cases of any UK-trained personnel being involved in such abuses.”

Unfortunately there is no way of knowing if that is the case, as by Ainsworth’s own admission the “names of trained personnel are withheld as their release would, or would be likely to, prejudice international relations.”

Again in 2005, soldiers from the 17th Brigade assaulted the community of San Jose, killing eight people – several of them children – in the process. In this instance, JFC contacted the British MOD for comment, which subsequently refused to confirm or deny that the 17th had received UK sponsored training.

We can gain some understanding of Britain’s involvement from statements given by Colombian army officers themselves. High ranking personnel have made numerous statements on the effectiveness of British assistance, with one officer, who appears to have received training in jungle warfare operations, being openly quoted in the newspaper El Tiempo.

Further evidence suggests that the British government is unconcerned as to who it is working with was provided in December 2007. This was when Foreign and Commonwealth Office Minister Kim Howells was photographed with soldiers of the High Mountain Battalions, troops which, as mentioned, have been implicated in varying abuses.

Howells also posed for the camera alongside General Mario Montoya; a man implicated in the deaths of multiple trade unionists and political dissidents. Montoya has a 30 year history of involvement with right wing paramilitaries, death squads and drug traffickers.

The man has also had the luxury of being flown over to Northern Ireland for seminars on counter-insurgency – or what is officially known as counter-narcotics – training. A great deal of Colombia military brass also enjoy the same treatment, with one event held in March 2008 being attended by none other than Juan Carlos Pinzon, the current Vice Minister of Defence for Strategy and Planning in Bogotá, as well as assorted high rankers from both Britain and the US.

General Montoya’s fortunes took a turn for the worse last November, when a UN investigation unearthed some of his more unsavoury activities. After resigning his position in the military however, Montoya escaped trial and now serves as Ambassador to the Dominican Republic.

There is more to Britain’s involvement than immediate commercial interests, however. Jeremy Corbyn, Labour MP and long standing campaigner on Latin American issues, believes that the “special relationship” between Downing Street and the White House dictates a high level of cooperation on the military field.

Speaking during an interview outside of Parliament, he said: “Colombia is important in that it has the most pro-US administration found in Latin America. The reason why such things as western involvement in human rights abuses are ignored by much of the press is that the government agenda fits in with everything the West wants.

A lot of multi national investment in coal, oil and gas can be found in Colombia. Alongside the substantial US presence across the continent, British military aid can become a Trojan horse for much deeper involvement.”

Although Howells was to lose face under the scrutiny of negative media coverage, the government still sees fit to continue providing assistance to their Colombia allies. The “Trojan horse” for further involvement, it seems, is still standing tall. The need for the working class to organise both industrially and politically has never been greater – the involvement of British imperialism in propping up the rotten murderous regime in Columbia underlines the importance of the international struggle against capitalism and for a socialist federation of Latin America.