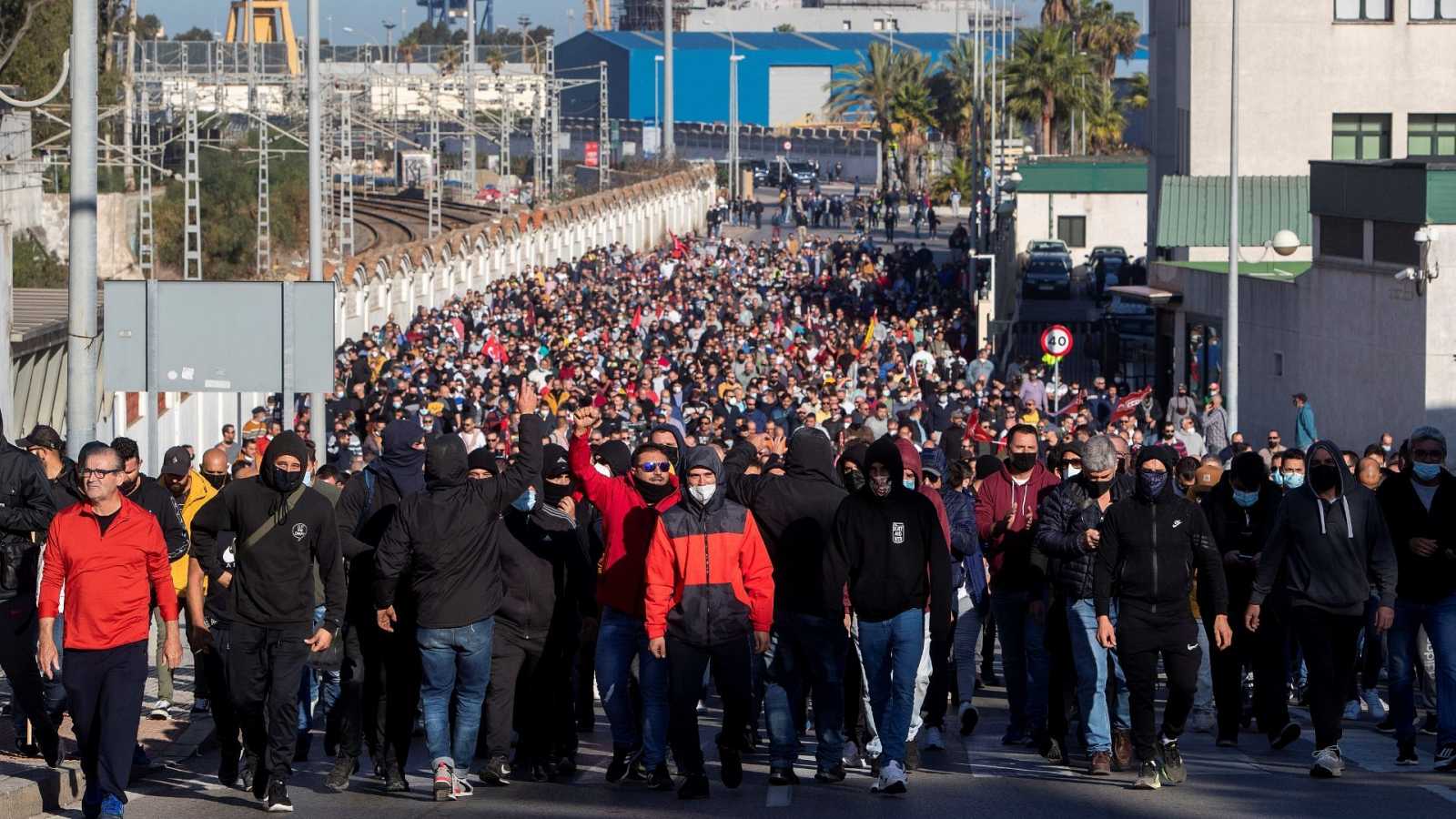 The Cadiz metalworkers are waging a magnificent battle in defence of the purchasing power of their wages, serving as a beacon of inspiration to all the workers of Spain. Faced with the greed of the bosses, the police repression and the attacks of the prostituted press, the workers are determined to fight to the end.

Seven days of indefinite strike action have so far elapsed in one of the bitterest battles in the history of this sector and province. It affects 29,000 workers and 5,600 companies, including the large factories in the Bay of Cadiz, such as Navantia (involved in ship building), Airbus, among others.

The most important thing to highlight is that the strike has been called by all the trade union forces in the sector: CCOO, UGT, CGT, Coordinadora de Trabajadores del Metal (Metal Workers’ Coordinating Committee), etc. This explains the scope and strength that the movement has exhibited so far. The strike is practically unanimous.

The workers are demanding a salary increase of 5.4 percent for this past year, to match the rate by which prices have risen in the last 12 months, according to the INE (National Statistics Institute). Therefore, workers are simply demanding to maintain the purchasing power of wages, and the continuation of tolerable living conditions for their families.

This is all the more important given that the bosses have started racking up profits, after the economic crisis of 2020. The companies listed on the stock market alone amassed more than 30 billion euros in profits during the first half of this year, and this deluge of money has also reached medium and small companies.

The strike has been called by all the trade union forces in the sector / Image: CSBC, twitter

And that's without talking about the fabulous profits of electricity companies, commerce, rental and real estate companies and so on, which are draining the income of workers with the biggest price hikes in 30 years!

The trade unions are demanding wage increases of 2 percent for the coming year, and 3 percent subsequent, starting with the signing of a new agreement in January 2022, when the current agreement expires. In response, the employer is offering a miserable, insulting increase of 0.5 percent this year, and 1.5 percent in the following two years!

This is unacceptable, and has inflamed an already huge accumulation of anger experienced by workers in the province, who also face the highest level of unemployment in the country at 23.4 percent.

The Cadiz metal sector owners use the threat of unemployment to force down wages, while they continue to sell their products at the going market rate, which has increased due to inflation throughout the country, thus increasing their profits.

20,000 engineering workers in Cadiz, Andalucia, Spain, have started an all out strike for wages and conditions today at midnight. pic.twitter.com/JK6sWm4HdY

Of course, the bought-and-sold media of the bourgeoisie have unleashed class hatred against the metal workers: the most-combative sector of the proletariat and with the highest class consciousness, which has a great and glorious tradition of struggle in the bay of Cadiz.

The media barons blamed the workers for obstructing the Hospital de la Línea de la Concepción (the main A&E hospital in Cadiz). This was a false claim: there was only one specific issue at one of the two entrances to the health centre. They were also falsely accused of blocking ambulances and assaulting a truck driver who did not respect the workers' picket line.

In reaction to these lies, dozens of health workers have come to the doors of hospitals and health centres in the Bay to applaud the striking workers while they marched and demonstrated.

The all out strike of metal workers in Cadiz, Spain, has seen pickets set up barricades and clashes with the police. The movement is led by young workers from the auxiliary plants, but involves the main factories (Naval shipbuilding, Airbus, Dragados, etc) pic.twitter.com/iLbWtB3Gwx

The Cadiz strike must succeed!

This heroic struggle reminds us that the working class, and its industrial wing in particular, is the most combative and determined force in society in the fight against injustices of all kinds, starting with labour exploitation. But our support and applause are not enough.

This struggle has to succeed – it can and must succeed. The first condition is to steadfastly maintain unity in the struggle and the strike. In this sense, the CCOO and UGT leaders hold the highest level of responsibility, and the workers must exert the utmost pressure on them so that they do not give in, or indulge in negotiations and agreements behind the backs of the rank-and-file trade union members.

DAY 4 of 20,000 strong all out strike of metal workers in Cadiz, Spain. Huge mass demonstration of workers and supporters: pic.twitter.com/TFnP3CVu6J

Everything must be discussed and endorsed in mass, democratic workers’ assemblies, and general assemblies of the whole metal sector in the province, not on the basis of piecemeal negotiations between the unions and individual company bosses. Either we win together, or we lose separately.

Let us be clear. The Cadiz metal bosses have the entire national ruling class behind them. The workers must not give in, because a victory for the Cadiz workers would send a rousing message of encouragement to the whole of the Spanish working class to follow their example.

The ruling class rightly fears an outbreak of wage strikes in response to the unstoppable rise in prices that we are suffering through.

After the partial victory of the workers at Tubacex (a metal tubing manufacturing company) in Álava, which tried to make a 20 percent personnel cut and was forced to give ground, it is of the utmost interest for the Spanish bourgeoisie to defeat the metal workers of Cadiz. In the same way, the triumph of their Cadiz brothers is of supreme interest for the Spanish working class.

The Cadiz struggle is pivotal for all Spanish workers. Maintaining an indefinite strike is very exhausting, if they are to win, the workers of Cadiz need to receive the encouragement and support of their brothers and sisters from all over the country.

Consequently, we must provide maximum solidarity and support to the struggle in Cadiz, set up strike fighting funds all over the sector, and in all companies, and link up the isolated struggles that are taking place in different areas.

Sevilla FC supporters in solidarity with all out strike by 20,000 metal workers in Cadiz. "The most important match is being played in Cádiz. Long live the struggle of the working class". pic.twitter.com/1mntej3axQ

All over Spain, there are struggles for better wages and against dismissals that should converge with the metalworkers’ strike, in Galicia, Alicante, Zaragoza, Murcia, Sagunto, Castilla y León, Jaén, Soria, Málaga and elsewhere.

The working class of the entire country must understand that a vision of its immediate future is being played out in Cadiz. We must direct all our support to this brave struggle, under the slogan: Union of Proletarian Brothers! All Together Until We Win!