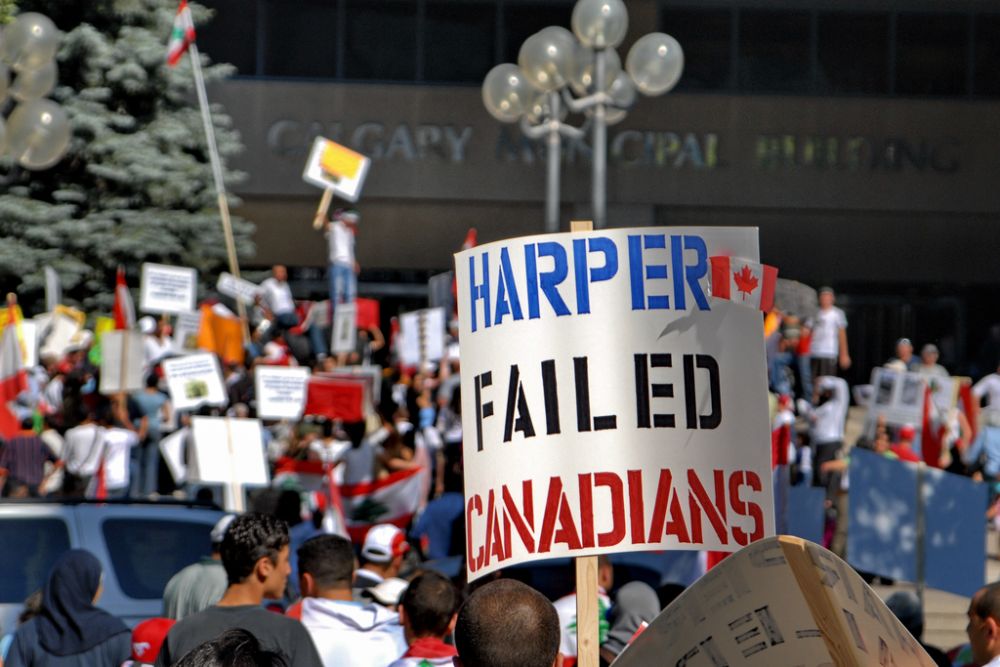 Canada is entering its fourth federal election in seven years. In that time, we have veered from minority Liberal to minority Conservative regimes. What has remained constant is the erosion of the standard of living of workers and youth, and the transfer of wealth to the rich and the corporations. We need to use this election to kick out the Conservatives and build support for socialist ideas.

Stephen Harper no longer deserves to rule. His regime has continued the massive corporate tax giveaway of $6-billion per year. This is occurring at the same time as millions of Canadians are having trouble getting by. The bottom 80% of the population, those who actually work for a living, have seen a reduction in their share of the national income over the last period. 1 in 4 have zero or negative assets and 870,000 are forced to use food banks, 38% of whom are children.

On the other side of the class divide, the friends of the Conservatives, the bankers and CEOs, are doing very well thank you very much. The richest 1% has seen its income-share double since the 1970s. The top 0.1 percent’s share has tripled, and the super-rich (the top 0.01%) has seen a five-times increase of their share of the loot. There exists a half-million-strong Canadian oligarchy, 3.8% of the population, that controls 67% of all assets, or $1.78-trillion. Yet, they tell us there is no money for social programs!

The Liberals under Michael Ignatieff have decided to present a left face for this election. They are opposing the current round of corporate tax cuts and questioning the $30-billion price tag for new fighter jets. However, we should not be taken in by their rhetoric. Let us not forget that it was the Liberals under Jean Chrétien and Paul Martin that conducted the most draconian cuts in Canadian history. It was also the Liberals who cut the corporate tax rate by 8%, compared with the Conservatives’ 7% cut. Liberals are well known for campaigning on the left but governing on the right. The reality is that either a Conservative or Liberal government will continue the attacks on working people while giving welfare to the rich.

The New Democratic Party (NDP) has a real opportunity during this election to wage a campaign to redress the historic inequality and poverty in society. However, if the party leadership is not able to present substantive socialist policies that would make a real difference, then they will be swamped by the fake-left campaign of the Liberals. Whining “they stole our policies” will not cut it — the party needs to propose policies that no capitalist party could steal.

There are some in the NDP bureaucracy who say that a socialist platform will never be popular and you have to appeal to the so-called “centre.” This prejudice has no basis in reality. A March 2011 poll by EKOS Research revealed that 49% of Canadians consider themselves left wing, versus 22% who think they are in the centre and 29% who are on the right. Additionally, 57% consider social investment as the main budget priority; only 17% want tax cuts and 23% deficit reduction. A policy of economic equality would benefit 80% of Canadians and provide each family with a nest-egg of over $364,000. The Liberals understand that the votes are on the left; Canada’s labour party needs to realize the same thing if it is to win! Additionally, the NDP needs to rule out any talk of a coalition with the Liberals that only sells out the interests of the working class and gives Ignatieff a left cover to hide behind.

Instead of spending $30-billion on useless fighter jets and billions more to continue the Afghan war, the money could be diverted to cover the less than $8-billion that is taken from students for university tuition every year, according to numbers from Statistics Canada.

Instead of $6-billion in corporate tax giveaways, we could provide a universal childcare program.

Instead of the $8.9-billion in bonuses the Big Six banks handed out to their CEOs in 2010, we could provide a doubling of pensions. 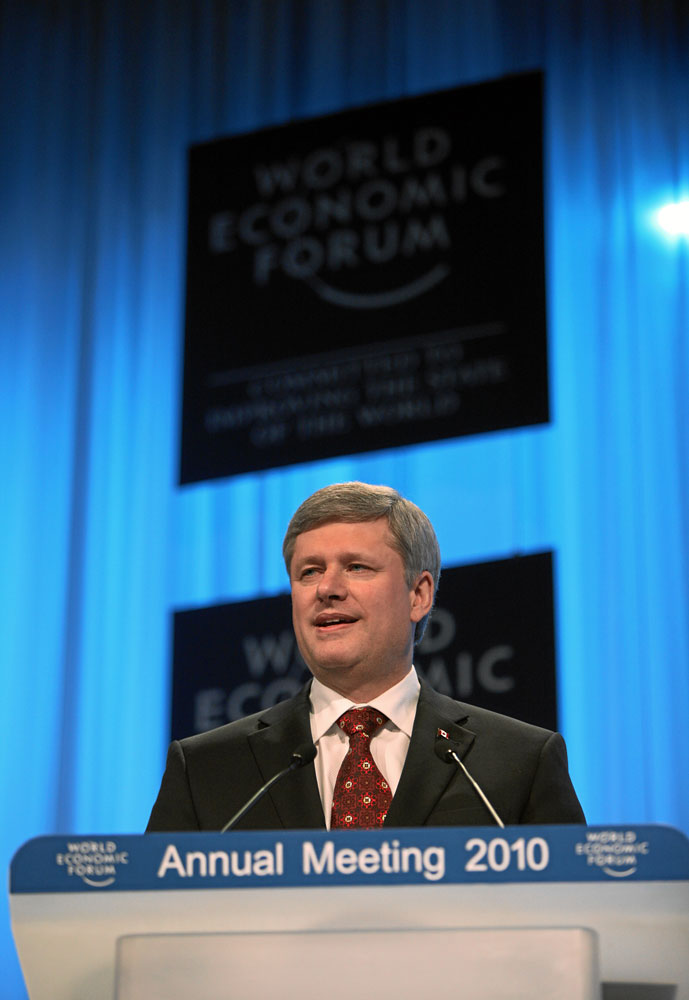 Stephen Harper. Photo: World Economic Forum/ Remy Steinegger Instead of spending $9-billion on mega-prisons while crime is going down, or $6-billion on high-tech strip searches at the border, we could provide a massive social housing program.

Canadian Auto Workers economist Jim Stanford has commented that for every dollar the Canadian government has pumped in, $100-billion in “stimulus”, Canadian corporations have pocketed the same amount. The big banks and corporations are refusing to invest, despite being showered with money! We say, if the bosses won’t invest then let workers do it through nationalizing the commanding heights of the economy and instituting a democratic socialist plan of production.

During the Great Recession, the corporations have shown that they are incompetent to run the economy. Taking over the parasitic drug companies alone would free up enough money to revolutionize the funding of healthcare.

This is a socialist program that could enthuse millions of workers, youth, and immigrants to get active and mobilize. Elections should not be seen as an end in themselves but as an opportunity to engage the population and create a mass movement around these demands. At the moment, the majority of the poor, the young, and the immigrants do not vote, as they do not see any of the political parties as representing their interests. Young people have over twice the level of unemployment while earning less than 60% of the average wage. These people are not apathetic; just look to the youth of Egypt and Tunisia who are the backbone of the revolutionary movement in those countries. If we can harness that energy in Canada, we will be well on the way to beating back Harper’s attacks and making real advances during this election and beyond.