Details
our correspondent in Antwerp
15 March 2010 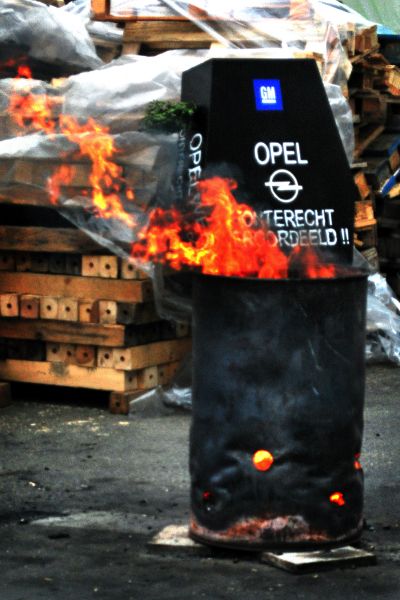 Solidarity with the Antwerp Opel workers is growing as the solidarity committee links up with more and more groups of workers from many different workplaces.

More than two thousand people formed a long chain of solidarity against the announced closure of the Antwerp Opel plant. In the car workers’ jargon the “chain” stands for “the assembly line” in the factory. Now it stands also for workers solidarity.

This action was prepared by the solidarity committee launched on the initiative of SP.a Rood (the left of the Socialist Party) in which the Marxists around Vonk play an important role. Other groups are also involved in this campaign. For the first time for quite a while even the Socialist Party leadership of Antwerp called for the action. In this they were following the course taken by different local branches of the party.

Workers from many other plants also decided to become ‘links’ in this chain of solidarity: Arcelor, Volvo, Honda, Daf, Atlas Copco, Johnsons Control, Crown Cork, Total and many others. The appeal for this activity was also extended to the workers of the Carrefour supermarket chain, waging a similar struggle against the bosses’ vandalism.

Not a few of the partners of Opel workers also risk losing their jobs as result of the closure of dozens of supermarkets. This “chain” of solidarity should be seen as one of the first steps in unifying the individual factory struggles. As Erik De Bruyn (SP.a Rood) explained in his speech before the assembled workers, “Today Opel and Carrefour are in the frontline. Tomorrow it can be your factory and your job because the public services will not escape the rage of cuts. This is why we do not abandon Opel. We do not abandon Carrefour. We will not abandon anyone.”

The action was prepared by an intensive campaign of information in the unions, at train stations, in the neighbourhoods and schools. The response of the national unions, although sympathetic was not strong to say the least. The campaign to keep Opel open was boosted by the active support of artists, especially actors and filmmakers, professionals, as well as students (see the six promotion videos at www.zomervanopel.be).

The closure of the Opel Antwerp plant is scheduled for the end of June. It will mean that at least 2600 workers will lose their jobs. Indirectly (through the many suppliers) up to a further 5000 people will be made redundant. The socialist union ABVV want the plant to stay open, while the Christian union ACV has given up on the struggle to keep the plant open. It is asking for a good “social plan”. But a job sold can never be bought back! And there are fewer and fewer other jobs to turn to in Belgium.

Opel unions decided to block the delivery of cars since the end of January as a means of putting pressure on the GM management. Their pickets get the regular support of the solidarity committee. At European level the Opel unions are standing firmly behind the struggle of the Antwerp workers to keep their plant open. But the union strategy of “sharing out the pain” (equal sharing of sacrifice amongst the workers of different European plants) does not constitute a satisfactory workers’ alternative. At the European level the unions and the left parties should wage a campaign for the nationalisation of the Opel plants under workers’ control and its effective reconversion to green, hybrid, electric cars and public transport.

Two film screenings of Michael Moore’s “Capitalism a love story” are scheduled in the next month to continue to rally support for the Opel workers. Those activities will also be focal points for discussing the necessary alternative to this society which condemns workers to the scrapheap while making huge profits.