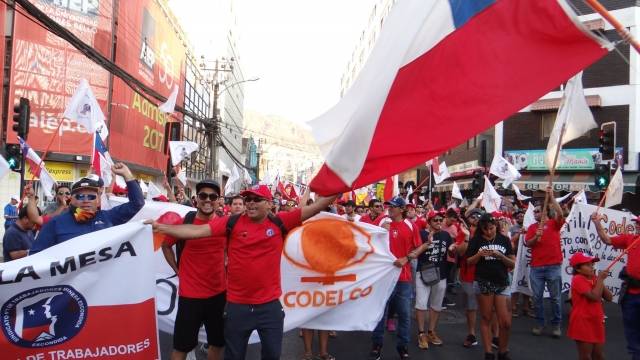 After 43 days of striking at the world's largest copper mine, Minera Escondida in Chile, the workers have decided to return to work by accepting an extension of the current contract. This means the workers maintain all the conditions and benefits that the company wanted to destroy.

Faced with an intransigent attitude by the employers, after 43 days, the Minera Escondida Workers Union No. 1 has put an end to its momentous strike. The company focused its offer around wages and an end of conflict, but kept its intention to remove benefits (for instance health benefits) for new recruits. This issue was overwhelmingly rejected by the miners, who, showing exemplary unity and class consciousness, clearly stated :

"Confirming that the aim of the bosses in these negotiations has been, from the beginning to make workers' conditions more precarious, and faced with the intransigent employer's position, which if introduced would be an ominous precedent, not just for workers at Escondida but for all workers of Chile, the union executive communicated to the company that talks had no chance of reaching agreement, because we will never be prepared to renounce to historical conquests of the workers, regardless of the amount offered in so-called end-of-negotiation-bones, and therefore, the Union will hereafter end the talks".

On Monday 21 March, in a decision which had been discussed and unanimously ratified by the workers' assemblies, they agreed to resort a legal clause in the Labor Code. Invoking Article 369, the term of the previous contract is extended for 18 months. Thus, counting from February 1, new negotiations are scheduled to start on 1 June 2018. 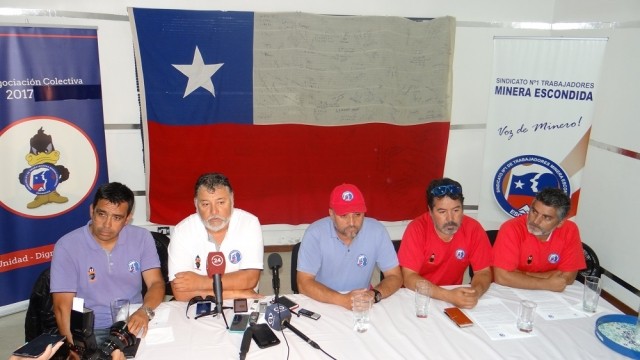 With this decision, workers will lose the offered end of conflict bonus and the payment for strike days, plus there will be no salary increases in these 18 months, but instead, they have kept all existing working conditions and benefits for current workers and for new recruits, in addition to the fact that the new collective bargaining in 18 months will start from a minimum level which has to incorporate at least 100% of the current conditions.

The powerful union of the world's most important copper mine has achieved a partial victory which sets a significant precedent for the class struggle in Chile and the international mining sector. There was a record amount of losses for the company BHP Billiton, more than a billion dollars, as the union had warned from the outset. The effects of the reduction in copper supply have been notorious, coupled with a strike by workers at the Cerro Verde mine in Peru, another giant copper producer, and problems with another giant in Grasberg, due to restrictions imposed by the Indonesian government to exports (both sites are in the hands of Freeport-McMoRan mining company), the conflict led to a momentary spike in copper prices in the mining market.

As we explained in a previous note, the central role of copper in the Chilean economy gives it a political character that impacts on several hot spots of the social climate of the country. Any significant social demand immediately faces the question of 'where will the resources come from'? And the answer is clear in the minds of all: copper. The historical demand for the nationalization of copper becomes almost automatically linked to the demand for free education and a public system of pensions.

In the same context, Sunday 26 March witnessed a national day of mobilization against the private pension system (AFP) convened by the National Workers' Coordination 'No More AFP'. According to organizers, 800,000 people marched in the capital Santiago alone, and throughout the country a total of about 2,000,000 people marched in 71 different demonstrations. The organisers had previously warned that this would be "the largest march ever," comparable only with the marches against the dictatorship in the eighties.

The private pension system was implemented during the dictatorship and designed by the then Labor Minister José Piñera, brother of former president and businessman Sebastián Piñera (who is again a presidential candidate). This law is widely rejected in Chilean society. The Administrators of Pension Funds (AFP) invest the money which the workers "lend" them, then privatize the profits, socialize the losses, and grant pensions which starve pensioners. The average old-age pension is 208,000 Chilean pesos equivalent to only about US$ 320 (the minimum wage is CLP 264,000), and as in the labor market, women receive less than men.

Moreover, officers of the Armed Forces receive pensions of 1.5 million pesos (2,255 dollars) and NCOs receive pensions of CLP 550,000 (US$ 827). Army personnel were the only sector that remained in the former pension scheme which existed until 1980. In addition to that, according to the Copper Law, as amended during the dictatorship, the armed forces receive the proceeds of 10% of copper sales, which they use for weapons purchases. The accounting of this money was kept secret until last December. This is the prize awarded by the State to the institution that paved the way for the neoliberal transformation of the country with blood and fire, so that the AFPs are able to suck the lives of workers in Chile.

The proposal developed by the 'No More AFP' campaign, envisages a solidarity based, tripartite pension system distribution administered by the state. Luis Mesina, the banking workers union leader and spokesman for the No More AFP Coordination, announced that it would demand the resignation of the Minister of Finance, accusing him of defending the private AFP companies. These huge demonstrations which already had massive support several months ago, are projecting a clear message in favour of ending the private pension system. This struggle is rightly seen as a struggle to end unfair privatized pension system as well as the Pinochet dictatorship once and for all. As the capitalists themselves have recognized, the very pillars of the capitalist accumulation model inherited via the 1980 constitution are being called into question.

This year has started with media coverage of the announcement of the 2017 presidential election candidates. Furthermore, the Minera Escondida workers have set an example of unity and struggle while the people have spoken loud and clear - this past Sunday - in the massive march against the AFP. Moreover, the CONFECH (Confederation of Chilean Students), which joined the anti-AFP mobilisation, has already announced the first student march this year, for April 11. Along with movements like 'Ni Una Menos' (opposing violence on women) and 'No Más AFP', they have launched the Coordination of Social Movements in order to "confront influence the election year together."

Chile has definitely been living in a climate of social unrest and discontent for some years. This is beginning to question the whole edifice of the limited bourgeois democracy that succeeded the Pinochet regime and the enormous social and economic disparities it rests on.