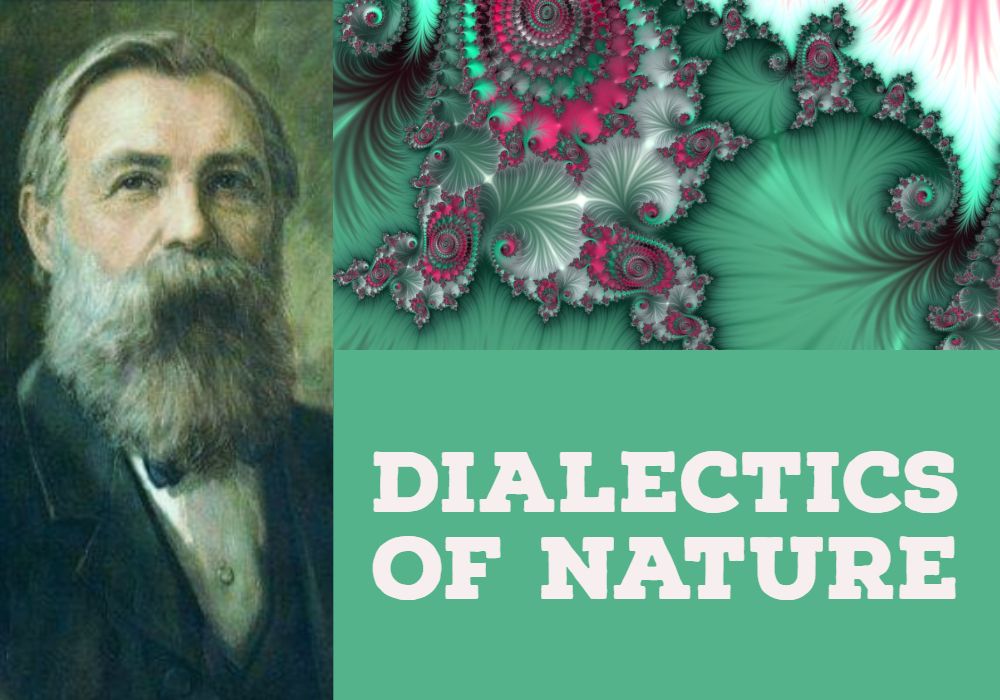 The second form in which mechanical motion disappears is in friction and impact – which differ only in degree. Friction can be conceived as a series of small impacts occurring successively and side by side, impact as friction concentrated at one spot and in a single moment of time. Friction is chronic impact, impact is acute friction. The mechanical motion that disappears here, disappears altogether as such. It can never be restored immediately out of itself. The process is not directly reversible. The motion has been transformed into qualitatively different forms of motion, into heat, electricity – into forms of molecular motion.

In calling physics the mechanics of molecular motion, it has not been overlooked that this expression by no means covers the entire field of contemporary physics. On the contrary. Ether vibrations, which are responsible for the phenomena of light and radiant heat, are certainly not molecular motions in the modern sense of the word. But their terrestrial actions concern molecules first and foremost: refraction of light, polarisation of light, etc., are determined by the molecular constitution of the bodies concerned. Similarly almost all the most important scientists now[1] regard electricity as a motion of ether particles, and Clausius even says of heat[2] that in "the movement of ponderable atoms (it would be better to say molecules)... the ether within the body can also participate" (Mechanische Wärmetheorie [Mechanical Theory of Heat] I, p. 22).[3] But in the phenomena of electricity and heat, once again it is primarily molecular motions that have to be considered; it could not be otherwise, so long as our knowledge of the ether is so small. But when we have got so far as to be able to present the mechanics of the ether, this subject will include a great deal that is now of necessity allocated to physics.[4]

The physical processes in which the structure of the molecule is altered, or even destroyed, will be dealt with later on: they form the transition from physics to chemistry.

Only with molecular motion does the change of form of motion acquire complete freedom. Whereas, at the boundary of mechanics the motion of masses can assume only a few other forms – heat or electricity – here, a quite different and more lively capacity for change of form is to be seen. Heat passes into electricity in the thermopile, it becomes identical[5] with light at a certain stage of radiation, and in its turn reproduces mechanical motion. Electricity and magnetism, a twin pair like heat and light, not only become transformed into each other, but also into heat and light as well as mechanical motion. And this takes place in such definite measure relations that a given quantity of any one of these forms of energy can be expressed in any other – in kilogram-metres, in heat units, in volts,[6] and similarly any unit of measurement can be translated into any other.

The practical discovery of the conversion of mechanical motion into heat is so very ancient that it can be taken as dating from the beginning of human history.[7] Whatever discoveries, in the way of tools and domestication of animals,[8] may have preceded it, the making of fire by friction was the first instance of men pressing a non- living force of nature into their service. Popular superstitions to-day still show how greatly the almost immeasurable import of this gigantic advance impressed itself on the mind of mankind. Long after the introduction of the use of bronze and iron the discovery of the stone knife, the first tool, continued to be celebrated, all religious sacrifices being performed with stone knives. According to the Jewish legend, Joshua decreed that men born in the wilderness should be circumcised with stone knives; the Celts and Germans used stone knives exclusively in their human sacrifices. But all this long ago passed into oblivion. It was different with the making of fire by friction. Long after other methods of producing fire had become known, every sacred fire among the majority of peoples had to be obtained by friction. But even to- day, popular superstition in the majority of the European countries insists that fire with miraculous powers (e.g. our German bonfire against epidemics) may be lighted only by means of friction. Thus, down to our own day, the grateful memory of the first great victory of mankind over nature lives on – half unconsciously – in popular superstition, in the relics of heathen-mythological recollections, among the most educated peoples in the world.

However, the process of making fire by friction is still one-sided. By it mechanical motion is converted into heat. To complete the process, it must be reversed; heat must be converted into mechanical motion. Only in that case is justice done to the dialectics of the process, the cycle of the process being completed – for the first stage, at least. But history has its own pace, and however dialectical its course may be in the last analysis, dialectics has often to wait for history a fairly long time. Many thousands of years must have elapsed between the discovery of fire by friction and the time when Hero of Alexandria (ca. 120 B.C.) invented a machine which was set in rotary motion by the steam issuing from it. And almost another two thousand years elapsed before the first steam engine was built, the first apparatus for the conversion of heat into really useable mechanical motion.

The steam engine was the first really international invention, and this fact, in turn, testifies to a mighty historical advance. The Frenchman, Papin, invented the first steam engine, and he invented it in Germany. It was the German, Leibniz, scattering around him, as always, brilliant ideas, without caring whether the merit for them would be awarded to him or someone else, who, as we know now from Papin's correspondence (published by Gerland), gave him the main idea of the machine: the employment of a cylinder and piston. Soon after that, the Englishmen, Savery and Newcomen, invented similar machines; finally, their fellow- country-man, Watt, by introducing a separate condenser, brought the steam engine in principle up to the level of to-day. The cycle of inventions in this sphere was completed; the conversion of heat into mechanical motion was achieved. What came afterwards were improvements in details.

Practice, therefore, solved after its own fashion the problem of the relations between mechanical motion and heat. It had, to begin with, converted the first into the second, and then it converted the second into the first. But how did matters stand in regard to theory?

The situation was pitiable enough. Although it was just in the seventeenth and eighteenth centuries that innumerable accounts of travel appeared, teeming with descriptions of savages who knew no way of producing fire other than by friction, yet physicists were almost uninterested in it; they were equally indifferent to the steam engine during the whole of the eighteenth century and the first decades of the nineteenth. For the most part they were satisfied simply to record the facts.

Finally, in the twenties, Sadi Carnot took the matter in hand, and indeed so very skilfully that his best calculations, afterwards presented by Clapeyron in geometrical form, have been accepted up to the present day by Clausius and Clerk Maxwell. Sadi Carnot almost got to the bottom of the question. It was not the lack of factual data that prevented him from completely solving it, but solely a preconceived false theory. Moreover, this false theory was not one which had been forced upon physicists by some variety of malicious philosophy, but was a theory contrived by the physicists themselves, by means of their own naturalistic mode of thought, so very superior to the metaphysical-philosophical method.

In the seventeenth century heat was regarded, at any rate in England, as a property of bodies, as "a motion of a particular kind, the nature of which has never been explained in a satisfactory manner". This is what Th. Thomson called it, two years before the discovery of the mechanical theory of heat (Outline of the Sciences of Heat and Electricity, 2nd edition, London, 1840). But in the eighteenth century the view came more and more to the fore that heat, as also light, electricity, and magnetism, is a special substance, and that all these peculiar substances differ from ordinary matter in having no weight, in being imponderable.

[1] At this time the ideas of Faraday and Maxwell were dominant, and physicists tended to regard electricity as primarily located in the field between charged bodies.

[2] A body at any temperature is in equilibrium with a certain density of radiation, though very little of the energy in a given volume is "in the ether," i.e. in the form of radiation, at ordinary temperatures.

[4] This has certainly been verified in the sense that for modern physics the properties of particles can be regarded as essentially repulsions and attractions in the space around them, which is also full of radiation. On the other hand, the idea of the ether has proved so full of internal contradictions that the word is now little used.

[5] As we saw, some of the heat in a hot body takes the form of radiation. When the body gets red hot this becomes partially visible (i.e. light).

[6] This is, of course, a mistake. The volt is not an energy unit, as Engels would soon have known had he ever had to pay an electricity bill!

[7] Even Sinanthropus, a type of man very different physically from ourselves, possessed fire, though of course we do not know how he made it.

[8] The use of fire immensely preceded domestication.