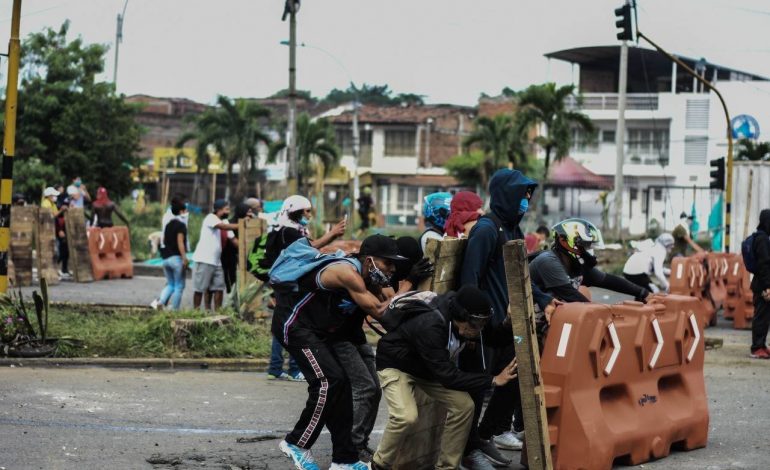 The national strike movement of 21 November 2019 has resurfaced like a revived giant as of 28 April, initiating what is becoming one of the greatest struggles of this period: the National Strike against the Tax Reform. The principle demand arose from exasperation caused by this obnoxious law presented by the Ministry of Finance. But behind it, there runs a deep discontent fomented by a long list of abuses against the ever–more impoverished masses at the hands of the Duque government. With each passing day, the strikers are adding new demands, whether or not they appear on the official list of demands.

Events have unfolded rapidly and have now reached an intense pace of development, with levels of violence increasing with each passing hour, reaching tragic levels, but also awakening an unprecedented level of consciousness among the masses. However, a real solution in the form of a revolutionary programme to help tackle the current crisis is nowhere to be found, much less a strong leadership that unites all organisations under a common goal.

This is giving the movement a disorderly character, weakening it and exposing it to spontaneous and insurrectionary actions, opening a space for opportunists and reformists who at each advance of the strike are attempting to reach an agreement with the bourgeoisie for purely electoral purposes.

Nevertheless, the experiences we are living through will provide lasting lessons. Despite their harsh cruelty, each day has shown the majority their capacity for unity. At the same time, it has revealed to the masses the violence and severity of the Colombian elite – this is nothing less than the true face of capitalism.

On the first day the atmosphere in the majority of the 23 cities where protests were held was more or less calm. According to the Strike Committee that initiated the movement, hundreds of thousands of people, respecting social distancing, came out to protest against the Tax Reform. The day ended with cacerolazos (pot banging) that was audible everywhere.

However, fear immediately struck the elites, faced with this vigorous show of force from the masses. They soon unleashed their only weapon: repression. So far, according to Human Rights International, 35 civilians have been murdered, 31 persons are missing, 45 human rights defenders have been attacked, and one woman was raped by police officers in the course of the marches.

It is possible that these figures are underestimates, considering that in the city of Cali there were clashes that were used as an excuse to declare a five–day curfew, with the army being called in. Towards the end of 30 April, the army indiscriminately fired rifle rounds at unarmed, peaceful protesters in Cali. As they did so, power was cut in various neighbourhoods. This indicates the degree of planning that the strategy involved. Huge numbers of soldiers arrived at the airport of the capital of Valle del Cauca in time for May Day.

These violent acts of repression have been replicated in other cities, such as Medellín, Bogotá, Neiva, Pereira, Buenaventura, among others. Shots from firearms, the burning of cars, the breaking of house windows, brutal beatings, the use of sports stadia as torture centres, and much else form the long list of their criminal acts. The order was given by Uribe, who took to Twitter to demand that the army and the police be allowed to use their weapons to fire against protesters, whom he classed as vandals. This provocative tweet was deleted and the former president’s account suspended.

Although the immediate trigger has been tax reform, the mass movement we've seen is the product of a long list of abuses that the Duque regime has committed against the ever–more impoverished masses / Image: Cancillería del Perú

At the same time, President Duque has acted infamously: ignoring the march and denouncing “acts of vandalism”, while criminalising, threatening and trivialising the protests. His latest act, cornered by the pressure he was facing, has been to announce modifications in the wording of the reform bill concerning points such as VAT on basic goods, gasoline and no longer increasing base income tax.

These are cosmetic changes. There are underlying issues that are more damaging to the (already low) income of workers. The movement is sick and tired of Duque’s methods, and the response has been to radicalise the movement, which is now demanding the total withdrawal of this Tax Reform and the Health Reform, as well as the resignation of the president, or else his overthrow by the masses.

However, such initiative has come directly from the masses in the street. The Strike Committee, and the workers’ unions – such as CUT and FECODE – have on the contrary decided to move the protest online, starting this Friday, calling for a return to the streets in a national stoppage as late as 19 May. They argue that the curfews in place for the third peak of the pandemic demand responsibility with public health. Such a withdrawal under these conditions neither preserves progress made nor does it prepare for future progress. It constitutes an abandonment of the workers in the middle of the fight for fear of confronting the reaction of the Duque–Uribe government.

Without the leadership of the unions or a revolutionary alternative, the Colombian masses can only count on their own energy. While this energy can move mountains, it can only do so with a revolutionary leadership and a socialist programme. Without this, it will be unable to find an expression that can change the conditions that generated it and must dissipate. All that will be achieved is an open confrontation with reaction: a confrontation that reaction is likely to win without much trouble.

We are on the brink of an insurrection of large proportions, a fact felt tangibly by the masses. We have witnessed an awakening among some individuals in the army, and even the police, showing a fracturing in these corrupt institutions. But we must understand that this is only just the beginning. These fractures are comprehensible as these bodies of repression are composed, in their ranks, of members of the working class and the poor peasantry. In many cases, their class backgrounds tend to create sympathy for the cause of the workers, especially when this cause finds a political expression.

How to face the future?

There is still a determination to push ahead. There would seem to be no bridle that can restrain the disobedience of the masses. Although we support this rebellion, we believe it is important that it is underpinned with organisation and theoretical education, otherwise the results may prove as tragic as they have thus far.

Neighbourhood committees should be created to discuss how to conduct self–defence against police abuses and to begin discussing the problems faced in the area, the city and nationally, and to suggest proposals to territorial councils. These must be framed within the democracy of the strike: when a course of action is decided upon through debate and voting, it is maintained until the opportunity for another debate opens. More than this, it is necessary to imbue these organisations with a socialist political programme that can give them a greater purpose than the defence of the movement: the purpose of challenging the Colombian elite for power. 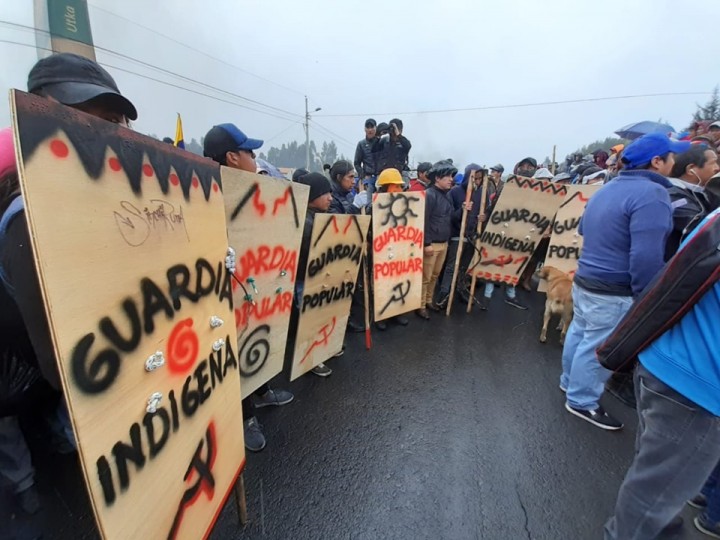 We have seen a number of insurrectionary movements over reactionary legislation in Latin America in the past period, including in Chile and Ecuador in October 2019, where self–defence was organised by the revolutionary masses / Image: public domain

The recent history of Latin America is full of insurrections caused by legislation such as the tax reform. We have seen the Red October in Chile and Ecuador. In both countries, protests caused by austerity bills ended with general strikes that challenged the power of the governments of Sebastian Piñera and Lenin Moreno, respectively. In both cases, people’s guards were created, committees of struggle formed to defend the protesters from the worst the police had to offer and to assist the masses in occupying government buildings. These bodies are the next step, as the trade union bureaucracy has abdicated its leadership role in this fight.

The task of the revolutionaries at this time is clear: to seek the best elements of the Colombian working class with these ideas, and to begin to bring these ideas to the rest of the Colombian working class. Ideas that clarify the reason behind the cruelty of this system and the Duque–Uribe government in particular and how to put an end to the class that this government represents.