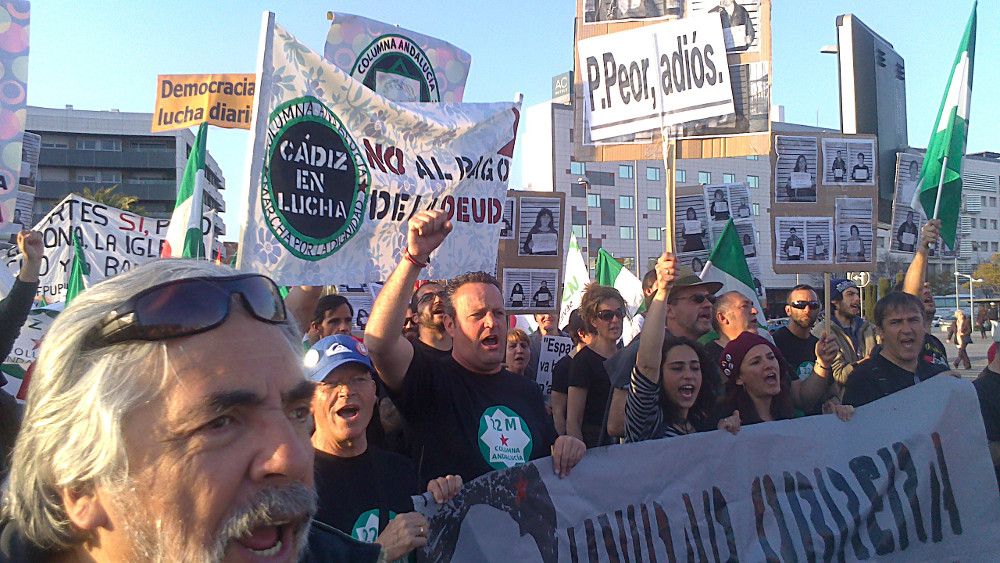 On Saturday, 22 March, Madrid will witness one of the main social and political mobilisations of the year, the March for Dignity. The aim is to gather hundreds of thousands of people in Madrid, from around the country in order to show opposition to the anti-working class and anti-social policies of the past few years. The demonstration will march under the slogans "Do not pay the public debt", for a "Basic income to all those without resources", "No more cuts", "Bread, Housing and Jobs for all" and "Down with the Troika Governments."

This magnificent mobilisation was initially promoted by the Andalusian Workers’ Union (SAT), led by the historical land labourers’ leaders Diego Cañamero and Sánchez Gordillo. However, their initiative has been enthusiastically embraced by hundreds of social, trade union and political organisations around the country, including the party of the United Left.

"Platforms for the Dignity Marches" have been organised in dozens of cities, towns and neighborhoods across the country. They bring together thousands of activists from a broad range of social movements, trade unions and left-wing political organisations.

Planning for the "Dignity Marches" began in November and dozens of public meetings have been held all over the country to launch them and explain their aims. 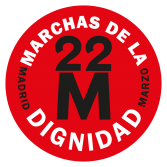 In the run-up to the main march in Madrid, six columns of demonstrators will arrive after having walked hundreds of kilometres from every corner of the country. These are: the Northern Column (Basque Country and La Rioja), the Northwestern Column (Galicia, Asturias, Cantabria, El Bierzo, León), the Northeastern Column (Catalonia, Navarra, Aragon), the East-South East Column (Valencia and Murcia), the Southern Column (Andalucía) and the Southwestern Column (Extremadura). All of these consist of tens and hundreds of comrades who march through dozens of towns and cities, thus raising the profile of the protest. In everyone of these cities and towns, the organisations involved in the organising platforms have helped provide logistical support and infrastructure to ensure the feeding of the marchers and, above all, to provide them with accommodation, mattresses, blankets, etc. In many cases the columns have been faced with boycott and rejection from several mayors of the right-wing Popular Party. They have refused to provide municipal sports centers or warehouses for the marchers to stay at and in some cases, like in Novelda (Alicante), the PP mayor prevented the column from entering the town altogether.

Apart from the six marches, hundreds of buses have been organised to transporter tens of thousands of people from all over the country to Madrid to participate in the main demonstration on March 22.

There is no doubt that the massive mobilisation for the Dignity Marches in Madrid will be remembered as one of the highlights of the struggle against cuts and austerity this year. Tens of thousands of workers, youth, unemployed, pensioners, families evicted from their homes by the banks, women, students, scientists and professionals - all the different sections of the people targeted by the criminal policy of the PP government - will be present. The Madrid firefighters - one of the most militant sections in the struggle against cuts - have already announced their participation. The organisers have also asked for their help to organise the stewarding in order to defend the demonstration against police infiltration and provocateurs. They have enthusiastically accepted this.

The marches raise the question: How can we allow this injustice of a handful of wealthy bankers, businessmen and landowners ruling society with an iron fist through their control of the economy and the governments while subjecting the majority of the population to their private interests?

We are the vast majority of the population, we represent everything which is alive, productive and creative in society. We produce and handle machinery and transport; we harvest, manufacture and package the food, we sweep the streets; we build the houses and the infrastructure and we provide healthcare and education.

We, the vast majority of working people, must take the wealth that we create every day from this handful of parasitic crooks, and make society ours. We can, we must and we will do this.

On March 22 we will show our strength. There is no greater thing those at the top fear than the people organised and on the streets.

We must therefore discuss what is the next step in the struggle. We cannot let this huge force that has been accumulated dissipate and fade away!

We, Lucha de Clases (Class Struggle), make the following proposals as a contribution to the debate:

Lucha de Clases, adopts as ours the demands raised by the "Platforms for Dignity Marches" in relation to non-payment of debt, a guaranteed basic income, a sliding scale of wages and others. As a contribution to the debate, in this topic, we think that these basic demands should be incorporated into a wider ranging programme of demands linking the most basic demands of employment, wages and housing, with the more general demands of achieving collective ownership, democratically managing, the commanding heights of the economy and the wealth generated by the labour of the working class. That is why we propose:

Comrades from Lucha de Clases are actively involved in the preparation and organisation of the march, and some are also marching shoulder to shoulder with hundreds of other comrades in the columns moving towards Madrid. As our comrade in the Andalucia column wrote in one of the daily updates we have published these days:

"Wherever we go, people see us as emissaries of something to come. They open their hearts, tell us their life stories; stories of former self-employed workers now unemployed and without benefits; of those whose parents were shot in 1936; of grandmothers who see their grandchildren have no future. So much effort, but it is worth it. We convey our enthusiasm to people and defy the shameful silence of the media, with our direct presence on the roads and in town squares. There are growing indications that March 22 will be something big. "Translation