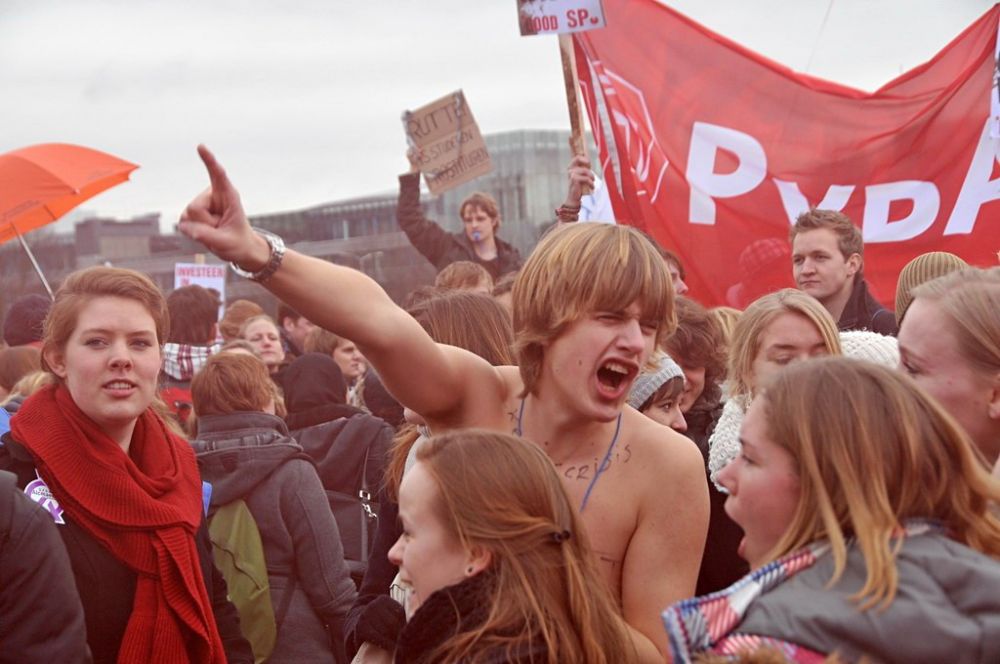 About 15,000 Dutch students demonstrated last Friday in The Hague against the cuts in higher education. This was the first big protest against Mark Rutte’s new right-wing government, and the biggest student demonstration since 1988.

Mark Rutte’s right-wing government, which consists of VVD (rightwing liberals), CDA (Christian Democrats), and which leans on support from Geert Wilders’ PVV, has planned some education “reforms” which in fact mean severe cuts. A much hated measure is the introduction of “fines” for students who study for “too long”. This means that students who study more than a year extra, for any reason, suddenly have to pay 5.000 euros a year for tuition fees, instead of 1.700. Another plan by this government is to scrap grants for the Master studies, while these studies are more expensive than the Bachelor studies. Also, a Bachelor on its own is not worth very much, so most students do a Master.

A peculiar measure is the proposal that universities also need to be “fined” if they have students that study “too long”. Universities will have to pay 3,000 euros per student. Experts agree that this will lead to a tendency for some universities to engage in fraud with degrees, in order to avoid paying the fines.

These are sufficient reasons for Dutch students to get angry. On Friday 21st January about 15,000 students came together on the Malieveld in The Hague to make it clear that they do not agree with these savage “reforms”. The demonstration was organised by a collection of centre-left and “neutral” groups with the aim of directing the anger into safe channels. This platform is full of opportunists, politicians from the PvdA (Labour), Groenlinks (Green left) and D66 (Social liberals), and the official student unions, allied with the boards of directors of the universities. When students at the University of Amsterdam occupied the university library to demand a free day to go on the demonstration, the Platform spoke out against it. They also tried to prevent Emile Roemer, the parliamentary leader of the Socialist Party, from speaking to the students. 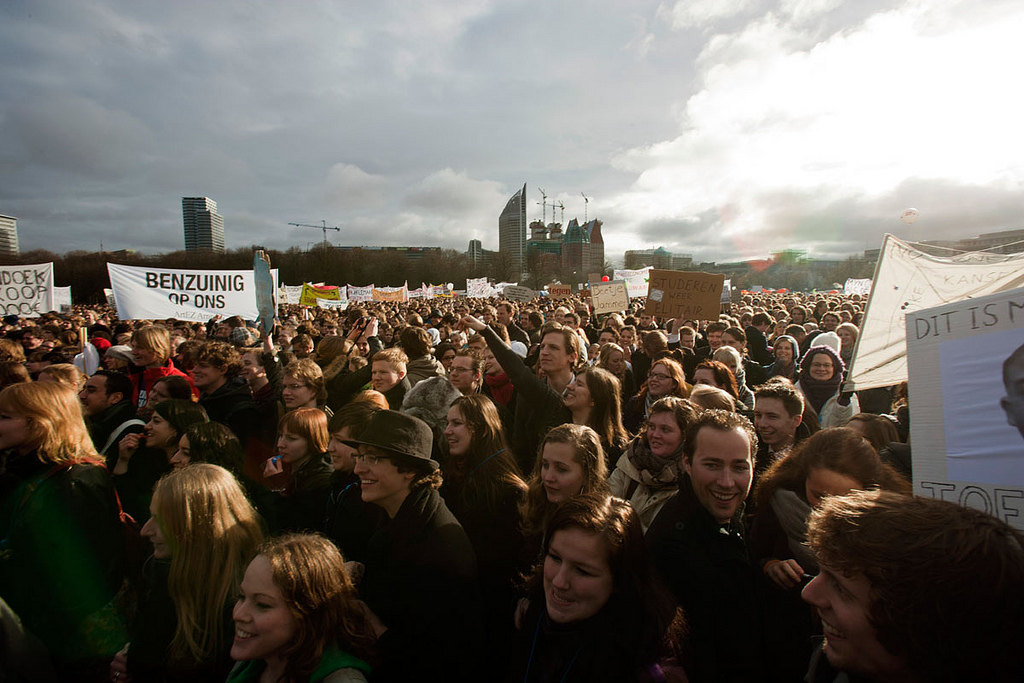 Massive protest in Haag. Photo: Patrick Savalle. The platform has thus been trying to convert the anger of the students into votes for the PvdA, Groenlinks and D66. These parties speak out against these measures, but their alternative is a kind of “cuts light”. They want to change the grants for students into a “social loan”. The argument is that students will all get good jobs and can easily pay the loan back.

While these arguments are clearly wrong, because a degree does not always mean a ticket to get rich, a lot of students have voted for these parties, because they see no alternative. The Socialist Party is the only party that is against all cuts in social spending, but their left-reformist alternative, with higher taxes for the rich and cuts for example in military spending, to “solve” the crisis, is not very popular because a lot of students correctly think these measures will not really work.

What is lacking in the Netherlands is a real socialist programme to solve the crisis. Through nationalisation of the big banks, insurance companies and other monopolies, it would be possible to use the enormous wealth in the Netherlands for useful purposes, such as free higher education for all.

The demonstration of the students was the first big demonstration against the new right-wing government, although there had also been some earlier demonstrations against the announced savage cuts in art and culture. The student movement is now on a higher level than before the parliamentary elections. Consciousness is changing. Before the parliamentary elections there were some actions by a vanguard of active students who wanted to warn the parties that the students would not accept cuts in spending on higher education. The biggest demonstration, however, could not attract more than 1,000 students. There was some confusion, as some right-wing parties promised no change in the system of grants, while the centre-left promised to change the grants into a loan system. After the elections the situation was clear for the students. This right-wing government wants to impose heavy cuts, and we don’t want this to happen. This way not only did the “vanguard” get organised, but thousands of “ordinary” students were also brought into the movement. 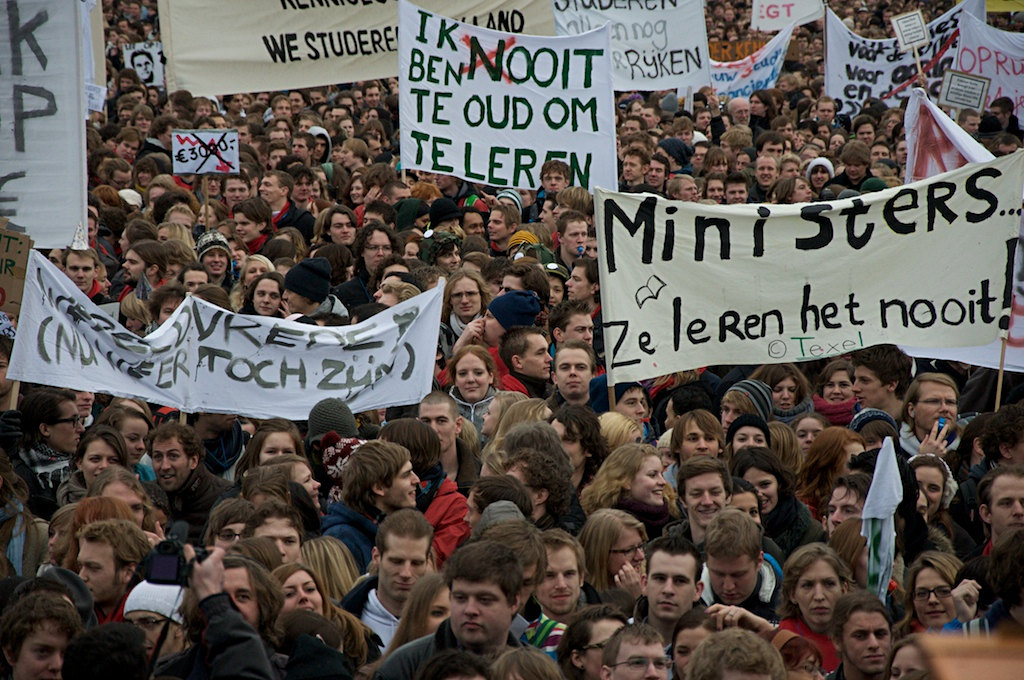 Photo: Rufus Baas The student movement should be an example for the labour movement. The two need to be linked in an alliance against the cuts. There are already links through the unions of the teachers and university staff. To start with, the movement needs to be linked to the public sector workers, who will be facing a wage freeze for years to come. Also the false friends need to be exposed. The university managers will do everything to save their inflated salaries, and if they have to cut spending, the students and staff will be the first victims.

At the moment a lot of people in the Netherlands have an attitude of wait-and-see towards the new government. It is natural that the Dutch people want some stability after the beginning of the crisis. Also, a part of the working class that was disillusioned with the left-wing parties, PvdA and SP, voted for Geert Wilders, who together with his racist and anti-Islamic proposals also used left-wing rhetoric and promised no counter-reforms in labour market policies.

It is ironic that someone like Geert Wilders should block most of the planned “reforms” for the labour market. That in fact means that he defended his programme better than the PvdA, the traditional working class party, did in the last 30 years. This is no compliment for Wilders, but it reflects the harsh reality for the PvdA that has adopted openly pro-market policies.

However, although some of the most severe cuts have been blocked for now, there will be a tendency to push for cuts and more cuts in the future; not because of the ideology of the parties in government, but because of the objective situation. The golden years are over, and the crisis is leading to a situation in which the Netherlands, just as the rest of Europe and America, are going back to the old style raw capitalism. 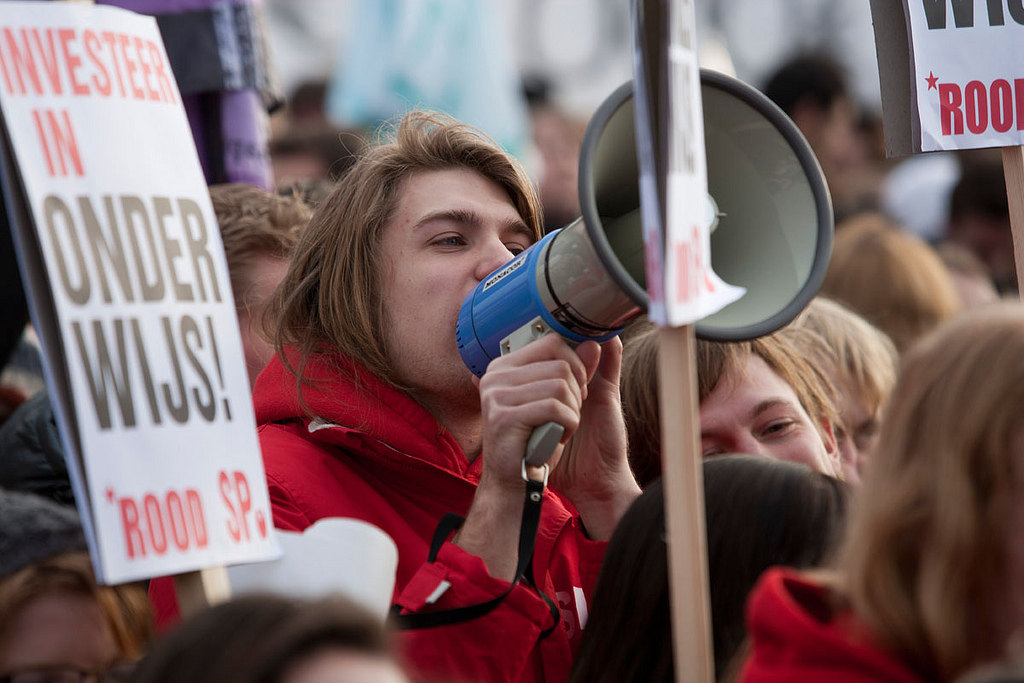 Angry mood among students. Photo: Patrick Savalle Now that the right-wing parties are in government, it is just a matter of time before the working people will see that this government has no solutions. The problem is that the left-wing parties don’t have one either. They lack a coherent socialist programme that can solve the problems of the Dutch workers and youth. With the weakness of the left wing, the government can hang on for a while, but on a very shaky base.

For example, plans for a new mission to Afghanistan to train the police force of the corrupt Karzai regime, are rejected by 70% of the Dutch people. Under pressure of American imperialism the government will do everything to get the proposal through parliament, but under pressure from below it will be difficult. These are all reflections of the unstable period in which we are living.

The Dutch students have fired the first shot, and the rest will follow!