Yesterday Greece was shaken by a massive 24 hour general strike. In some sectors there was a total walk out, and in industry as a whole 70% of the workers came out. This is the answer of the Greek working class to the government’s severe austerity measures. The task now is to build on this and keep up the pressure to get the whole package withdrawn. 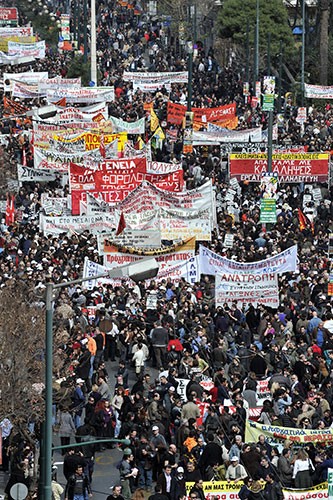 The engines stopped, the ships stood still, public transport was paralyzed, the state was brought to a standstill. The working class of Greece ‑ in spite of the fact that the government, the bourgeoisie and the mass media were trying to keep it silent with a storm of ideological and political terrorism ‑ yesterday answered back. The working class got back into action with a massive general strike, sending a message of social disobedience to the class enemy and its political representatives. This was their way of showing that after the constant attacks flowing from the economic crisis and the government’s policies, finally the workers are coming out of their passive state and are starting to counter-attack.

According to the GSEE figures, participation in the general strike was high in all the big workplaces. Participation at the “Scaramanga” ship-building yards was 100%, at the refineries 100%, on the ships and in the ports 100%, in the construction industry 90%, in the banks, the DEΙ (state electricity company), OTE (parastatal telecommunication company), ELTA (post office) , OSE (state railways) and EYDAP (water state company) 70% and in industry as a whole it was 70%. On the other hand, it was estimated that participation in the small and medium sized private companies was low, especially in the services and commerce sectors, where trade unionisation is very low and the fear of lay-offs has massively increased.

Demonstrations took place in 70 cities across the country, most of them remarkably massive. Once again in Athens there were two separate demonstrations, the GSEE-ADEDY demonstration and the PAME demonstration. The two demonstrations had in total 50,000 people attending, most of them participating in the GSEE and ADEDY (over 30,000 people). The most common slogans that could be heard were “The plutocracy should pay for the crisis”, “No more illusions, it is either Capital or the workers”, “PASOK and New Democracy means high prices, economic crisis and unemployment” and so on.

The central speeches from the platform were very radical, reflecting the aggressive mood that is growing within the ranks of the labour movement.

The president of GSEE, Panagopoulos, talked about “a great political strike” in his speech, and also stressed that “the jobless, the pensioners and the working people must not and cannot afford to pay for the crisis”. Although, he once again avoided any self-criticism about the previous attitude of the leading majority wing of the GSEE, that participated in the fraudulent, so-called “social dialogue” over the last three months with the government, spreading confusion and disillusionment within the labour movement, as well as giving the government and the capitalists the necessary time to launch their generalised attack. He also said nothing about the need to push the struggle forward, in order to face up to this attack.

The PAME leadership stressed that “the workers must not make any sacrifices for the owners of wealth” and mentioned that “PAME will use this new big and successful strike in order to strengthen its action, so that the workers’ struggle becomes the government’s and capitalists’ permanent nightmare, looking forward to the next demonstration on the 8th of March”. In other words, the PAME leadership did not draw any lessons from the failure of its previous separate demonstrations, nor from yesterday’s experience where it failed not only to gather more people than the demonstrations of GSEE-ADEDY, but also to win the active support even of the narrower party circles of the KKE (Communist Party) and KNE (Communist Youth). The PAME leaders have systematically refused to apply the basic idea of Lenin of the United Front, which explains why, although the workers are back on the march, PAME still remains a minority wing.

The main thing we have to stress is that yesterday, the first important step was taken by the Greek labour movement. The working class has shown its willingness to fight. The leaderships of the labour movement should now respond to the mood of the rank and file and push the struggle forward, through unity and determination, until the government’s reactionary measures on social security, taxation, workers’ incomes and labour relations are totally withdrawn, with the aim of adopting a policy which will guarantee jobs, good wages and a decent standard of living for all the working people.

[See also the programmatic demands of Marxistiki Foni for the strike that we published in our leaflet yesterday].