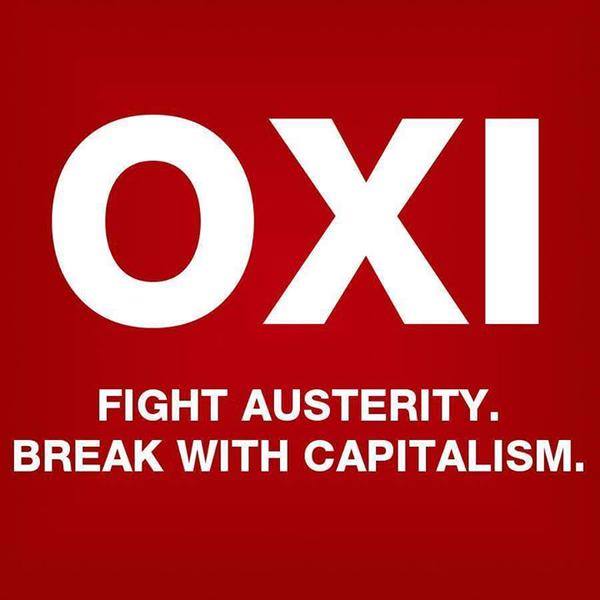 The working class based victory for the "No", with more than 60% is a revolutionary event. The people have given a mandate for revolutionary resistance and against Memorandum agreements. It's time for the nationalization of banks, repudiation of the debt and the overthrow of Memoranda and barbaric capitalism which spawned them.

The official results show a great working class victory of the "No" in the referendum - 61,32 % for NO and 38,68 % for YES. The working class, the impoverished layers, the students, working and unemployed youth, with its centre in the progressive areas of the country, its major cities, sent a message of heroic resistance to the "black front" of the Troika and the Greek ruling class.

The fact that the referendum was conducted with anything but democratic conditions, with a terrorist economic war by the "black front" against the people, closed banks, unpaid workers and pensioners, threats and blackmail by the representatives of the troika and bourgeois political leaders of the European Union and constant hysterical, provocative propaganda by the media, gives the victory of the 'NO' a revolutionary character.

The mandate of the majority of the people is clear. It asks the Government to continue to resist signing Memoradum agreements and to take appropriate measures to face up, in a victorious way, the class war waged by the Troika and the Greek capitalist oligarchy which will escalate in the coming hours and days.

Within this general mandate, as from tomorrow Monday, the government should not lose any more time in futile negotiations with the extortionists - the "institutions" of imperialism, which can only lead to different versions of Memoranda. It has a duty to take the necessary radical measures. Banks should immediately nationalized to protect the deposits of small and medium savers. The debt, which is "illegal" according to the Truth Commission of the Parliament, must be canceled. A comprehensive plan for the immediate withdrawal of the Memoranda and overthrow of brutal capitalism that created them (see the program proposed by the Communist Tendency) should be implemented, accompanied by a mobilization of workers and youth, who clearly showed the revolutionary mood with the magnificent gathering on Friday in Athens, but also with their class their votes today, as a guarantee of the implementation of such measures.