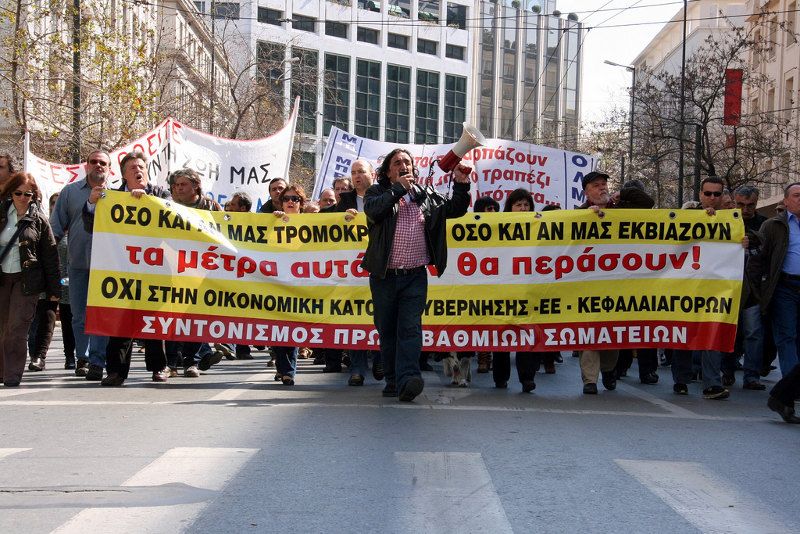 Last week, on March 11, Greece was shaken by an even bigger general strike than on February 24. As the government announced its third austerity package the mood of Greek workers has become one of growing anger and militancy. All the conditions are there for a massive escalation of the conflict.

These measures were the last straw and produced an explosive reaction amongst the workers. The first opinion polls showed a disapproval rating of 80% and 45% in favour of a general strike throughout the whole population (which means that these percentages would be even higher amongst the workers). This has made the initial high popularity ratings of the government a thing of the past within just a few hours.

There had already been a big demonstration of 25,000 in Athens, two days after the first announcement, during which Manolis Glezos, the 88-year-old hero of the Greek National Resistance against the Nazis and veteran leader of the Communist Movement was sprayed in the face with teargas by a policeman and rushed to hospital with breathing difficulties. If this had led to the death of Manolis Glezos today we would be talking of an insurrectional situation in Greek society.

It can be safely said that participation in the strike on March 11 was bigger than on February 24. According to the GSSE, the participation levels reached 90%. The bourgeois press reported that 30,000 were on the demonstrations in Athens. In fact, those who witnessed both demonstrations of the GSSE-ADEDY at the Pedion Areos and of PAME at Omonia Square say that there were 50,000 in total.

There are three important factors that reveal the psychological state of the working class at this critical point in the struggle.

Firstly, there is anger against the government’s measures and the capitalist class. Ever more workers are starting to see the naked brutal class reality and the real role of this government, as their pockets are emptied in order to secure the super-profits of the Greek and international speculators. 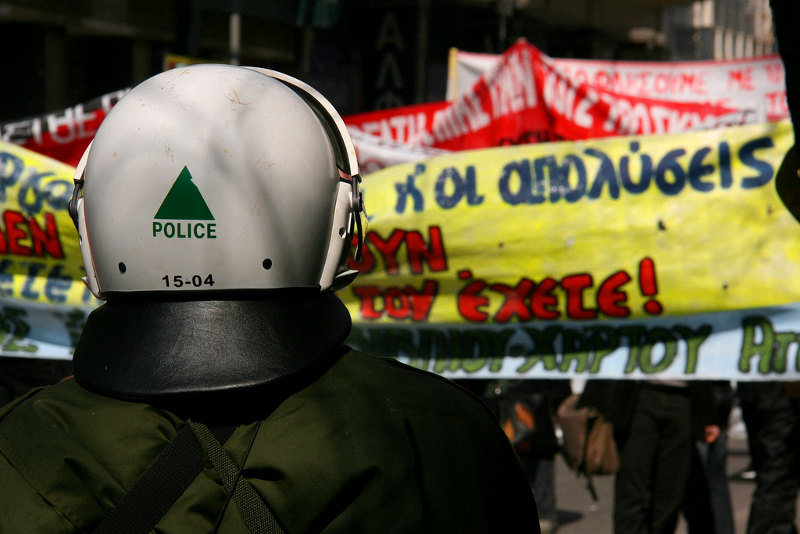 Photo by Left~Lens. Secondly, there is huge distrust of the trade union bureaucracy. It is important to underline the fact that very few workers actually stayed in the vicinity of the speakers’ platform, where there were mainly leaders of unions that are under the control of PASKE [the PASOK faction of the unions]. The main body of the demonstration at the Pedion Areos turned their backs on the platform and gathered in front of the Museum where SYRIZA and other left movements were gathering. This development is a clear indication that the workers reject the bureaucratic leadership of the unions. Talking with workers gathered in the square, the lack of trust in the union leadership was evident. This has emerged during the talks between the unions, the government and the capitalists, where the trade union leaders offered no clear stand and gave no alternative to the measures being proposed.

Thirdly, there is confusion over what demands the working class should be raising. This is the result of the lack of any clear demands from the leaderships of both the trade unions and the opposition workers’ parties, who are simply limiting their demands to calling for the withdrawal of the measures without proposing any concrete solutions in favour of the working class.

What needs to be done?

The justified anger and the fighting spirit of the workers by themselves are not enough to win this battle. The bourgeoisie is staring default in the face and as they are in a deep recession they are not going to step back easily. In order to win, the working class needs to draw up a clear plan of coordination and escalation of the struggle, with concrete demands that are a real solution to the problem.

Moments like these are historical. If the draconian austerity measures are allowed go through, this will inevitably create a feeling of disappointment amongst the workers for a certain period of time. For the struggle to be effective it must be a united one. To succeed in this, the leadership of PAME [Communist Party faction in the unions] should allow the thousands of communists and their comrades in the trade unions to demonstrate jointly with the rest of the workers! All the mass political and trade union organisations of the working class should act jointly. GSEE, ADEDY, SYRIZA and the KKE [Communist Party of Greece] should set up a united front, calling on the forces of the PASOK that disagree with the government to also join.

The leadership of the working class must be aware of the fact that the workers have already made important sacrifices in order to participate in the struggle against the austerity measures, but without seeing any results. They have participated in a record-breaking number of general strikes in the last 4-5 years, losing significant income without achieving any victories. And apart from this, the workers in the public sector such as those of DEI, the schoolteachers, the dockers, the contract workers and local government workers, as well as participating in these the general strikes, have also organised their own specific sector strikes with long and bitter battles without getting any concrete results. In the last few weeks alone, the government workers have been out on strike many times, losing many days’ pay. There is a limit to the resistance that workers can put up, especially in periods of crisis like the one we are passing through.

That is why the leadership has as a duty to immediately build on the present fighting spirit and not waste it in mobilisations that are not part of a concrete programme of action. If the workers do not see a concrete programme of escalation of the struggle and a determination on the part of the leadership to take the struggle to the end, they will start to get disappointed. If, on the other hand, they were to see a united leadership prepared to fight to the end, they would “dig in” and respond massively to the calls to mobilise, as they would have the confidence that any sacrifices they make could lead to victory.

So what plans does the leadership have to step up the struggle? No one knows! All we have is a call from the ADEDY leadership and the Workers’ Federation for a rally this Tuesday [March 16]. But one more rally does not equal a stepping up of the struggle. On the contrary, if it is not accompanied by a more decisive and concrete plan of strike action, it can actually mean the opposite, i.e. demobilisation. If such a message is sent in the wider masses of the working class, then what we will see in such rallies is a leadership of the trade unions that will feel immense loneliness…

It would be a criminal mistake if now, with the fresh memory of two successful general strikes, the leadership were to move to so-called “other forms of action”, instead of decisively stepping up strike action. The government has no intention of stopping at its latest measures. On March 7, the bourgeois press announced that a further 200,000 redundancies are expected in the civil service and that wage cuts are inevitable in the private sector.

This attack against the working class is not going to stop; it will unfold over a whole period and is part of a concrete plan. That is why we need to work out our own workers’ plan of action, and adopt a concrete programme that should be discussed and debated in mass assemblies in the all the workplaces and working class neighbourhoods. A first step in such a stepping up of the struggle should be a new, united, and coordinated 48-hour general strike in the next ten days, with united and well stewarded mass strike rallies and demonstrations in all the major cities, combined with the call to the workers in large enterprises that are being threatened with redundancy or have not had their wages paid, to occupy the factories and demand nationalisation under workers’ control and management.

At the same time, it is necessary to raise clear demands that will show to the workers a way out from the crisis, one that defends their own class interests. Further to these demands there should be: 1) a freeze on the repayment of speculative loans, 2) nationalisation of the banks that would allow the cancellation of 30% of debt that is owned by the Greek banks, 3) “35 hours, 5 days a week, 7 hours a day” without any loss in pay in order to fight unemployment, 4) the expropriation under workers’ control and management of every major company that threatens closure or redundancies, and so on. (See also the list of demands we drew up Marxistiki Foni, published on February 24).

Above all, the leadership of the Left parties must provide an answer to the agonizing search on the part of the workers for a political solution. They should abandon their vague discourses and explain to the workers that the government in saying that the fall in workers’ living standards is a one way road is a lie and they should explain that another policy exists. The leaderships of the KKE and SYRIZA should call on the workers to fight for the nationalisation under workers’ control and management of the commanding heights of the economy and ask for their political support in order to carry out this policy once they are in government.

Only by adopting such a stance can we vindicate the struggles of the workers and provide a positive perspective to Thursday’s big general strike.