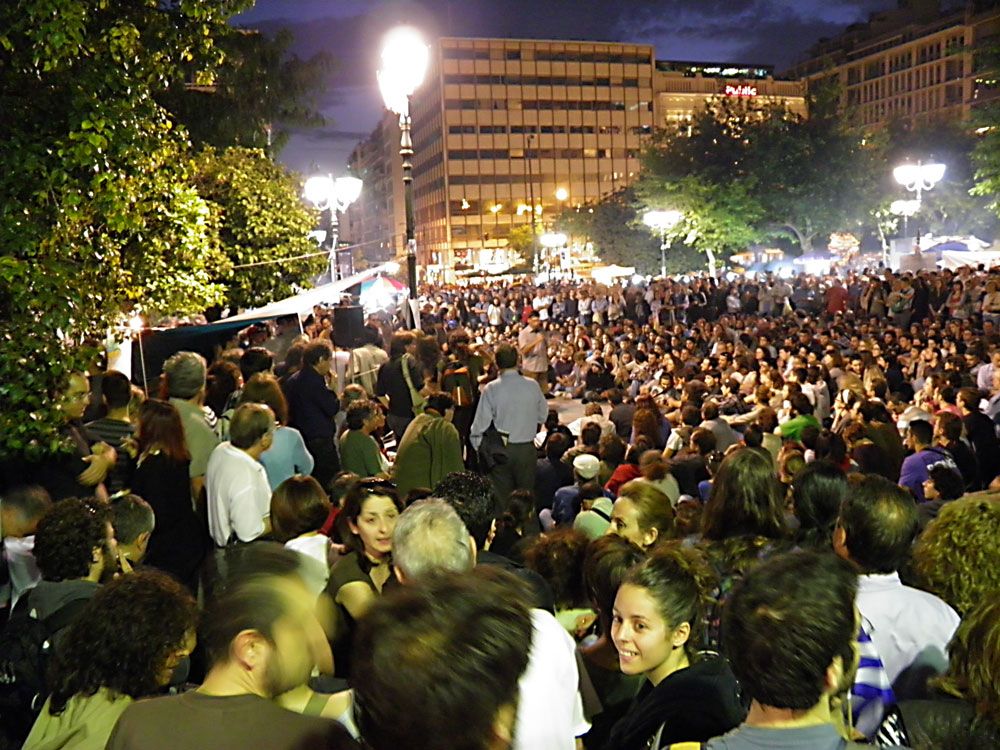 On Sunday night at Syntagma Square, as a follow-up of the mass demonstration of 150,000 people against the blackmailing of the workers by the bankers and their political lackeys, there was the biggest popular assembly since the beginning of the movement, with the participation of between 6.000 and 7.000 protestors. Among the speakers who took the floor was the member of the editorial board of “Marxistiki Foni”, comrade Stamatis Karagiannopoulos, who made the following short speech:

1. OUR STRUGGLE IS SOCIAL, CLASS-BASED AND INTERNATIONAL: Regardless of the symbols chosen by each individual participator in the struggle (Greek flags), the struggle is objectively social and class-based. It is a struggle against the bankers, against Capital, against the bourgeois political careerists: all those that created the debt and loaded it on our backs. We have nothing in common with the Greek bankers and industrialists. However we have the same interests as the migrants, the European workers and youth, along with whom we demonstrate today. Therefore our struggle is objectively internationalist.

2. MASSIVE PARTICIPATION AND HOW TO REACT TO REPRESSION: The weapon of this movement since the beginning is massive participation. This is the best antidote to the plans of repression that the state is now elaborating, as we have seen in the past few days in Barcelona in Spain. We now need to extend the movement to all the neighborhoods and workplaces, with mass meetings to elect action committees and coordinate on a nationwide scale.

3. ON THE ISSUE OF THE GENERAL POLITICAL STRIKE: Yesterday’s decision of the People's Assembly for a general political strike must be the subject of our attention. A general strike cannot be arranged outside of the unions and the workplaces, but requires struggle within the trade unions and the workplaces. Above all, a general political strike raises the question of power and the movement should have a clear answer for this. What is our proposal and what are the criteria for our proposal? Those who managed the system and got us into this mess should not participate in the new government: New Democracy and the other right-wing parties and the current leadership of PASOK. In general, this government should not consist of "personalities" and "specialists" of power, but should express the genuine interests and direct control of the working people. It must come from within the democratic mass organizations, those that exist today and those that will be created in the course of the struggle, with representatives to be elected and accountable to them.

4. ON THE QUESTION OF “DIRECT DEMOCRACY”: The goal of “direct democracy” is in general a move in the right direction. But what does this mean? Democracy must have a specific social, class and political content. There is no democracy if it is not extended to the economy, where democracy means workers’ control and social control and ownership of banks and all major businesses. The direct democracy which we demand should not be a neutral social democracy, a system of continuous consultation with no practical relevance, but a workers’ democracy, where power will be exercised at all levels of society by the working class and its democratic institutions.