The NDP's "surge" in Quebec has caught all of the so-called pundits and experts by surprise.  Poll after poll now has the NDP as the most popular political party in Quebec, even ahead of the nationalist Bloc Quebecois.  How can this be so?  After years of the stale nationalist-federalist debate, Quebec workers are looking for new answers and a defence of workers' rights. 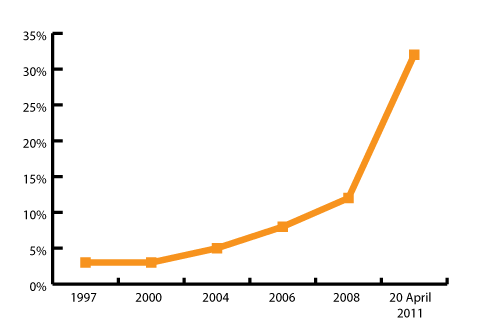 It was half past twelve on Saturday and a three-block-long lineup could already be seen outside the Olympia Theatre where Jack Layton was scheduled to speak at one o’clock. The atmosphere was charged with enthusiasm as the NDP, according to most polls, is poised to make a historic breakthrough in Quebec. A boisterous crowd of nearly 2,000 packed the venue — the biggest turnout ever for an NDP rally in Quebec. “We tried to find a large enough room ... it was difficult,” Layton said to his supporters with a big smile. Sending a message to the Bloc Quebecois, the rally took place smack in the middle of Gilles Duceppe’s riding and a stone’s throw from his campaign office.

Poll after poll have revealed what many thought was not possible in Quebec: a federalist party gaining support at the expense of the nationalist Bloc Quebecois. In the 2008 election, the NDP only gained 12.5% of the popular vote in Quebec. But, a CROP poll done for La Presse on Thursday put the NDP’s support in Quebec at 36%, compared to 31% for the Bloc. The Conservatives and Liberals (with 17% and 13%, respectively) trailed badly. Another poll done by Ekos for iPolitics showed the NDP pulling 31.1% of support while the Bloc stands at 23.7%. Once again, the Liberals (20.6%) and the Tories (16.9%) were much further behind. An Ipsos-Reid poll on Friday reported the NDP standing at 28% in the polls and the Bloc at 27%. (The Conservatives sat at 24%, and the Liberals at 20%). Whatever statistical difference between all these polls, the trend is clear: the NDP is gaining historic support in Quebec.

While Gilles Duceppe and other party leaders try with all their might to downplay the polls, their knee-jerk reactions betray their confidence. Liberal leader Michael Ignatieff is quick to point out that the NDP’s platform is “science fiction” while forgetting that many of the Liberals’ programs are borrowed from the NDP’s platform. Meanwhile, Gilles Duceppe is attacking Layton’s promise to reverse privatization of health care in Quebec, by closing down private clinics, as a federalist attempt to trample Quebec’s sovereignty! By saying this, the Bloc reveals that its struggle for Quebec’s independence is nothing but a struggle for the Quebec bosses’ independence to attack the workers. The Bloc and the Liberals are now turning their guns against the NDP. Their “Anything But Harper” campaign has rapidly turned into “Anything But the NDP.”

How do we explain this turn in Quebec politics? The learned pundits and experts have nothing to add other than showcasing their bewilderment. “It’s the big mystery, in the sense that no one saw this coming,” said Marcel Martel, a York University history professor. As we have stated on numerous occasions, including our recent draft perspectives document, Quebec workers have been looking for a way out of the status-quo federalist-nationalist back-and-forward that has dominated Quebec politics for the last 30 years. They are looking for a party, any party, that stands for something different than cuts, attacks, and austerity. The NDP has become that option for many Quebec workers in this election.

“It’s time for a change”, said Manon Chenier, a 54-year-old recycling plant worker from Thurso, Quebec, who had previously voted for the Bloc since 1993 and is now leaning towards the NDP. Yvon Roy, a 68-year-old taxi driver from Gatineau is also disappointed with the Bloc. “They’ve been there for a few years, and it hasn’t changed much,” he said. This is the underlying sentiment that has been brewing for years in Quebec society: a yearning for a change. However, this is not a normal yearning for change, otherwise we would have seen much of the Bloc’s support bleeding to the Liberals and Tories, parties that are much better established in Quebec than the NDP. The fact that Quebecers have shifted their support to the NDP, the labour party in Canada, says a lot about the kind of change that they seek — no matter how vague and confused it is at the moment. The Quebec workers are looking for a class solution to their problems.

The Bloc has no other cards to play other than its old nationalist card. It cannot openly oppose NDP’s social programs, so it has been pushing the nationalist buttons even harder. “Those who want a country have only one choice,” Duceppe said before a few dozen of this campaign volunteers. But the Quebec workers are now making a new choice. They are choosing jobs, healthcare, and pensions.

Whatever the final result of this election, something is clear. All of the old political relations are being thrown in the air and new ones are being formed. For the first time since the Common Front general strike of 1972 there is the possibility of working class issues dominating the politics of the province. In a later article we will analyze the weakness of the NDP platform, which does not differ significantly from the Liberals and therefore cannot avert the coming wave of capitalist austerity. However, with the exception of the issue of Afghanistan, it is clear that Quebecers are not supporting the party out of a detailed study of the NDP platform. They are supporting the NDP out of rejection of the old sterile federalist-nationalist debate and this marks a clear turn to the left. These developments therefore mark an encouraging and significant step forward in the class struggle.