Because of its interest we publish this report by an Argentinean trade unionist about the reaction of the masses to the election farce in Honduras on November 29. 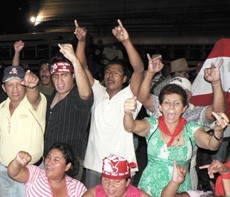 While the Honduran people and the international community are still waiting for the Supreme Electoral Tribuna (TSE) to announce the final results of the elections on November 29 – up until now the only figures released are early counts, since the data transmission system collapsed – the Resistance celebrated the victory of abstention and took over the streets of the capital again with an unprecedented motorcade. 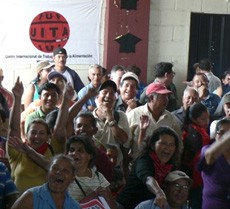 The big meeting hall of the Union of Beverage Workers (STIBYS) was too small to hold the thousands of people who came to celebrate the victory of abstention in the election farce on November 29.

In front of the national and international media, the crowd were showing their little fingers without the voting ink, opening their hands to show they had not voted, while the leaders of the National Front of Resistance Against the Coup read a statement in which they once again denounced “the failure of the electoral farce organised by the oligarchy on November 29 under conditions of dictatorship”, reaffirming their position of considering the elections and the results both illegal and illegitimate, refusing to recognise the “regime which will come in on January 27, 2010” and asking the “governments and the social and democratic movements of the world” to do the same. 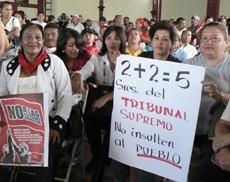 They also considered as null and void “all the actions of the current de facto regime and the one that will replace it”, rejecting at the same time “any amnesty for those who have violated human rights”.

Finally, the Front called for a “National Constituent Assembly which represents an alternative, channelling the demands of political participation of the Honduran people as a whole.” “We will continue to struggle for a Constituent Assembly” they added. 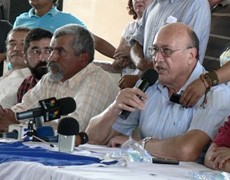 At the end of the press conference, and while the assembly of the Resistance started, more people joined in bringing flags and shouting slogans. Sirel was able to talk to Carlos H Reyes, president of STIBYS, member of the World Council of UITA, and leading member of the National Front of Resistance against the Coup, in order to make a balance sheet of the situation after election day. 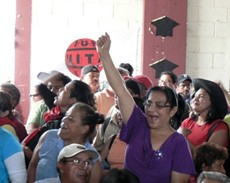 “Everybody could see how the participation in these elections was insignificant and how the national media, in a national broadcast, and the presidential candidates, had to come out and try to convince people to vote”.

“When I heard the judges of the TSE say that people had gone to the polls massively, and they started giving provisional results, I was astonished at their capacity to lie”. 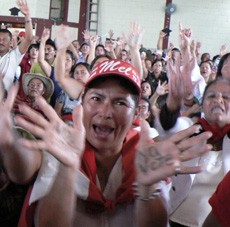 “However – Reyes continued – the truth is that abstention won the day. They knew in advance, but the aim of this farce was not to see who won the elections, but to have a turn out over 60% in order to be able to show it to the world and force it to recognise the elections”

“We should not forget that the coup plotters took power and they are ready to stay, not to give it up on January 17. These people have been prepared to use repression and to kill, committing all sorts of brutalities against the people in resistance. We have no other alternative but to struggle, whatever the cost” said the trade union leader and former independent presidential candidate. 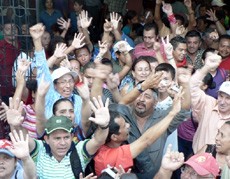 For Carlos H Reyes, the Resistance is not interested in discussing the results announced by the TSE, because the electoral process has been flawed from the beginning, since constitutional order was never restored in the country.

“What we are interested now is in continuing the struggle to go back to constitutional order and towards a National Constituent Assembly.” 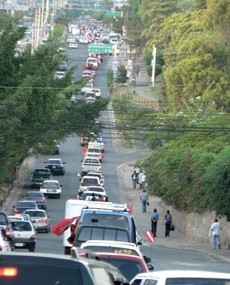 “This is a project that cannot be built overnight, we need tactics and strategy in facing up to power, and we will start by not recognising either the current coup regime, nor the one that will come after this elections.”

“We will also discuss giving the Resistance an electoral wing, whether through a party or an independent candidature, and this is a necessary condition to go forward”, explained Reyes.

Regarding the behaviour of the international community, the member of the leadership of the Front, explained that it would be very difficult to maintain the unity which existed at the beginning, however there is a real hope that the majority of the world’s countries will understand “that this is just another way of not recognising the will of the Honduran people which have showed their opposition to this election and the coup”, he said. 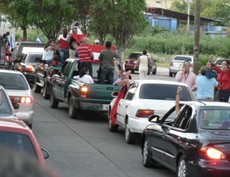 At the end of the mass meeting, thousands gathered around the National Autonomous University of Honduras (UNAH) starting a massive motorcade through the main streets of the capital. Hundreds came out on the streets to greet them with flags, banners or simply showing their clean little figures without election ink, which these days have come to symbolise opposition to the June 28 coup. 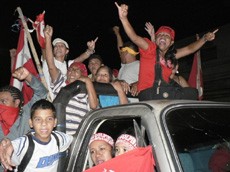 The motorcade ended a few blocks away from the Brazilian embassy, where president Manuel Zelaya has been seeking refuge for more than 2 months, and a large crowd gathered next to the military and police present there, dancing, singing and shouting slogans, celebrating their victory. 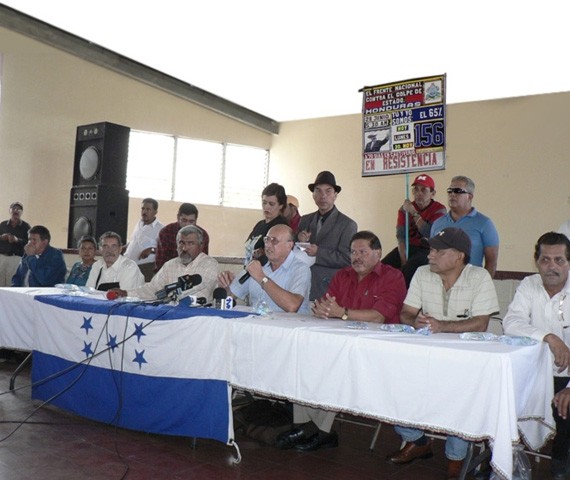