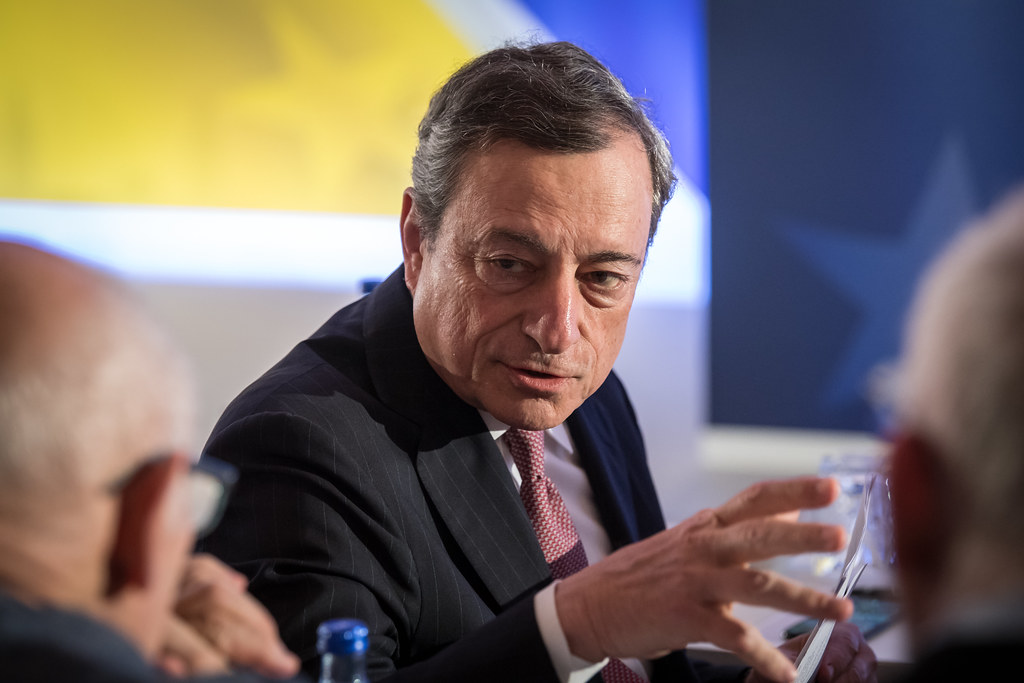 Draghi’s ‘Recovery Plan’ is being hailed as the saving grace of the beleaguered Italian economy. But this litany of half-measures comes nowhere close to resolving the dire crisis of Italian capitalism. And while ‘Super Mario’s’ plan might provide some short-term relief to the bosses – workers and youth will be left high and dry.

“Italy’s destiny is in the Recovery Plan,” Italian Prime Minister Mario Draghi declared before parliament, while outlining the €248 billion spending plan that was then passed with the support of all parties, with the exception of the right-wing opposition party, Brothers of Italy, who abstained.

The plan was then sent to the European Commission. Draghi was hailed by the Italian bourgeois newspapers, and even more so by the international press, for whom Italy has been transformed – in the time it takes to change a government – from an outcast to a model for Europe.

However, this grand reception for Draghi’s project was in complete disproportion to its actual scope.

But for comparison, in the course of a few months, US President Joe Biden has presented three spending plans totaling $5.9 trillion dollars. That’s about $18,000 per capita.

The Italian plan reflects Italy’s weak position in world capitalism, and it won’t serve to change anything of significance. Italy saw 8.9 percent wiped off its GDP in 2020. According to IMF estimates, at the end of 2022 ,it will still not have recovered this loss. And GDP in 2019 had not even recovered to pre-2008 crisis levels.

According to government estimates, based on the most-optimistic scenario, the spending plan is expected to increase employment by 3 percent in 5 years, creating 750,000 jobs. In the last year alone, 950,000 jobs have been lost, and on 30 June the ban on redundancies will be lifted, resulting in the loss of an estimated 1.5 million jobs in the coming months.

In short, given the depth of the hole Italian capitalism is in, Draghi’s plan amounts to tinkering around the edges.

Where is the money going?

There isn’t a page of the plan that doesn’t bandy around high-minded sentiments about “digitisation”, “ecological transition”, women, young people, etc. This is partly about political image, but above all it’s an effort to comply with the requirements of the European plan, which envisages compulsory spending quotas on all these items.

In reality, behind the surface-level marketing, the plan can be summarised as a cobbled-together list of spending items that can be categorised under the following three headings:

In short, this is a plan first-and-foremost for the bosses, as confirmed by Cottarelli, the former spending review commissioner:

“The plan aims to create the conditions for private companies to take the lead in the long-term growth process [...] so that Italy becomes a better place for private investment.”

Notably, despite the brutal impact of the COVID-19 pandemic on Italy’s decrepit health service, the section on health is last and the sector receives the least funding.

The fact that the dedicated section on health opens by saying, “on the whole, the National Health Service presents adequate health outcomes, a high life expectancy at birth...” makes clear that whoever wrote it lives in a parallel dimension.

In the reality everyone else is living in, the healthcare system collapsed during the pandemic; average life expectancy has been lowered by one year and six months as of 2020; and all non-Covid care (preventative, diagnostic and therapeutic) is experiencing delays, the price for which will be paid into the next decade.

Under the heading of ‘digitisation’, €10 billion has been earmarked for public administration and the judicial system, to modernise this bureaucratic machine. It should be pointed out that, as with the whole plan, there are no plans to hire people on a permanent basis, but only young people with IT or legal skills on three-year contracts, who will then be given a pat on the back and a nice letter of merit.

The largest item, however, is €14 billion, which will go directly to companies for the purchase of “4.0” machinery, plus another €2 billion to support them on the international market. These measures are protectionist in character, aimed at shoring up Italian business and infrastructure, which essentially means trying to export unemployment.

The fairy tale of the “green revolution” 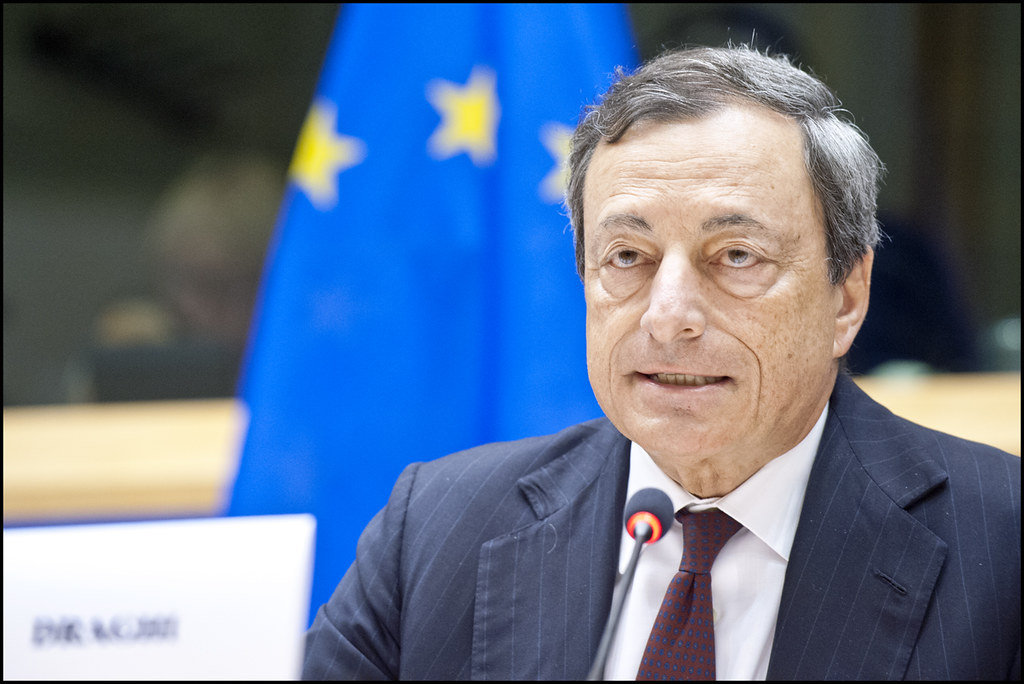 'Super Mario' does not have a plan to save the Italian economy, only to provide some relief to the bosses while leaving workers in the cold / Image: Pietro Naj-Oleari, Flickr

The 'green revolution' is the largest item on the list (€60 billion) and it represents anything but a revolution. The highest single item (€14 billion) covers fiscal bonuses for the energy efficiency of buildings, an incentive introduced by the previous government, aimed at supporting the building industry rather than the environment.

On energy, even the most moderate environmental groups declare that the target of 4.2 GW more from renewable sources to be insufficient to deal with the climate crisis.

There is a complete lack of an proper plan for investment, and the money is spread over a thousand items: a bit of biomethane (which is harmful to the environment and health), a sprinkling of solar panels on fields and in small towns, a bit of wind power, we shall see where (there is even talk of offshore platforms!)

A certain amount of emphasis is placed on hydrogen, the source preferred by the fossil fuel multinationals because it can be developed in combination with gas. Not a word is said about the €19 billion a year tax incentives for fossil fuel companies.

In terms of infrastructure (€25 billion), the lion’s share is accounted for by large-scale works for the high-speed rail network (€13 billion), against €1 billion for regional lines. For the most part, these are projects that have already been planned. In some cases these plans had been opposed by environmentalists but, in order to use European funds, they have suddenly become part of the ‘green’ revolution!

The plan envisages cutting the timeframe for public contracts and concessions, with a reduction in anti-mafia, anti-corruption and environmental impact controls. Again, the main intention behind this is to encourage investment to enrich Italy’s capitalists.

Minister Giovannini explicitly commented that, “without a change in the authorisation and executive procedures we would not only miss the 2026 target, but we would also lose other capital willing to bet positively on Italy’s rebound.”

The section concerning education is the one where there is more of a clear political design, namely, to ‘reform’ all levels of education in order to completely subordinate the sector to private business interests.

The humanities are completely ignored in the plan and are likely to be left without investment. In schools, the priority is to “align the curricula of technical and vocational institutes with the demand for skills coming from the productive fabric,” and to double enrolments in Higher Technical Institutes (two-year courses for insertion in companies, an alternative to universities.)

To make sure that Confindustria’s priorities become those of the students, as early as the third year of high school, students will be subject to orientation hours in which they will be shown the career path they should choose.

Similarly, in universities, a reform of degree classes is announced in order to allow maximum flexibility in the programmes at individual universities, so that they also reflect the needs of local companies.

Worthy of mention is the paragraph on university student halls of residence, for which a “reform of legislation on student accommodation” is planned, to allow them to be opened up and managed by private companies. The state will guarantee the expected revenue for the first three years of management, and places not occupied by students can be offered on the market.

The last link in the chain is research, for which €11 billion is earmarked, all of which is geared towards partnerships between universities, research centres and businesses, and the promotion of ‘national champions’, with funds beyond any short of state control, whilst every other area of research is left underfunded.

The other planned reforms all follow the same direction. In public administration, the priority is to streamline practices and have direct recruitment channels for managerial and technical figures to develop the plan, just as in research and universities, economic incentives are provided to recruit private managers and researchers.

The plan commits to enacting competition laws every year, with the aim of opening up all areas of expenditure to the market, from port management to public procurement, where public administrations will have to justify in advance any in-house assignment (that is, to public subsidiaries).

There is also a venomous attack on workers in local services, first and foremost in transport, but also on port workers (revision of concessions) and other sectors, who see themselves in the crosshairs of new privatisation processes and a downward spiral of competition.

For the Recovery Plan formula, all these reforms are indispensable, because if they are not applied according to the illustrated timetable, the EU could suspend payments, a fact that Draghi reminded us of in parliament. In other words, workers and students are being made to foot the bill.

What about the workers?

The workers are noteworthy by their absence from this plan. They are dependent variables, to be shaped according to the demands of the bosses, made to go wherever they are needed for as long as they are needed.

On 30 June, redundancies in large companies recommence. The programme outlines plans for reform of social security, to create a system “capable of coping with transformations”: that is, a social security system for workers to bridge increasingly discontinuous employment.

The vice-president of Confindustria (the Association of Italian bosses), Stirpe, hastened to express his support for the plan, with particular enthusiasm for the education reform, and called for further deregulation of employment contracts.

The 30 June deadline also marks the end of the eviction freeze and the moratorium on family mortgages. 45 percent of companies are at structural risk, especially small and medium-sized ones. They too are ignored by the plan.

The Recovery Plan offers no solution to these problems. Indeed, the triumphalist tones with which it was presented have quickly dissipated, and expectations have turned to general scepticism.

Draghi’s popularity, which started out at 68 percent, has fallen by 9 points in his two months of government. In the coming months the social sectors that have been ignored will demand their share: including workers.

With a €248 billion plan behind it, the government won’t be able to say that the money isn’t there. Nor will the bosses be able to do so in the sectors that are making profits. Conditions will therefore improve for trade union struggle.

The union leaders, who continue to plead for a spot at the negotiating table and for their ‘involvement’ by the government, are completely stumped. Draghi and his ministers are lavishing fine words upon them, whilst ignoring them completely.

The passivity of the trade union leaders has led them into a dead-end, but they show no sign of developing a mobilisation strategy either. It will become increasingly clear to workers that only through mobilisation will they be able to wrest something from them.

The government, the bosses, the media: all have promised miracles that will fail to materialise. Quite the opposite. In the case of young people already exasperated by the insane policy on schools and restrictions, and provoked by the education reform, it is likely that the plan will only enrage them further and push them into protest action.

In short, ‘Super Mario’ does not have a plan to save Italian capitalism. His ‘plan’ amounts, in manifold ways, to bringing in the state to help out the parasitic bosses whilst the workers are left out in the cold. However, the plan does show workers that when the bosses come begging the money is there to be spent. With or without their trade union leaders, the workers will also demand their share.