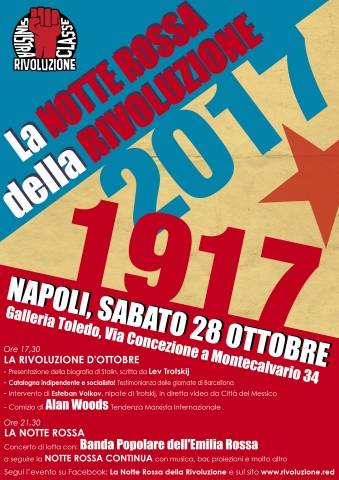 100 years ago, under the leadership of the Bolshevik Party, the workers in Russia took power. John Reed called it “The Ten Days that Shook the World”, the beginning of a gigantic struggle to leave behind the ruins of capitalism and build a new society – a task still to be accomplished. A hundred years on, Sinistra Classe Rivoluzione, the Italian section of the International Marxist Tendency, is organising a big event to commemorate the greatest revolution in history on Saturday, 28 October, in Naples.

This is not going to be just a typical meeting, but also a festival to celebrate October, with the aim of re-energising our forces to face the challenges ahead.

The Red night will be at: