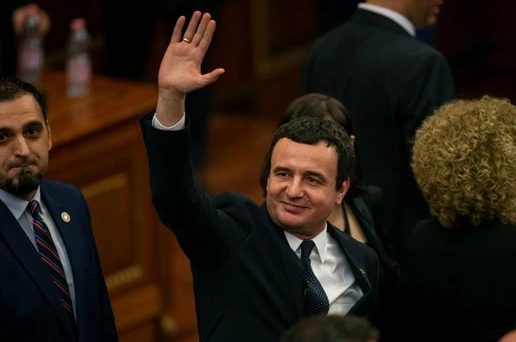 The parliamentary elections in Kosovo on 14 February 2021 ended with a sweeping landslide victory for the left-wing "Movement for Self-Determination" Vetevendosje (VV). They scored a 20 percent increase, from 27.7 percent in the last election in 2019 to 47.85 percent according to the latest count. The centre-right PDK (Democratic Party of Kosovo), founded by Hashim Thaci, lagged far behind with 17.41 percent. The bourgeois conservative LDK (Democratic League of Kosovo), which had been in power for many years in the past, only scored 13.08 percent. Another right-wing formation, the AAK (Alliance for the Future of Kosovo), led by former UCK (Kosovo Liberation Army) commander Ramush Haradinaj was stuck at 7.43 percent. Nisma-Social Democrat (Social Democratic Initiative) scored only 2.6 percent and will thus not get any seats.

As things stand, VV can expect to win 56 out of 120 seats in parliament. It is deemed certain that there will be enough votes from among the 20 parliamentarians elected on the ticket of national minorities (Serbs, Roma, Gorani, Askhali) to form and support a new government with an absolute majority.

This marked an important upheaval after Kurti’s short spell in government between February and June 2020. His government, relying on the support of the LDK, was sunk in what many regarded as a Trump-instigated manoeuvre.

VV turned out to be the overwhelming choice of the youth (half the population of Kosovo is under the age of 25), workers and small farmers. All the big cities in Kosovo were taken by VV. In the capital of Prishtina, VV won with 64 percent. But it also won in important cities like Prizren, Ferizaj and in Mitrovica.

Workers, women and youth have high hopes for a VV government

The election result could shift even further in favour of VV, as more than 47,000 votes from postal voters from the "diaspora" abroad have not yet been counted. It is known that the majority of emigrants working in Switzerland, Austria, Germany and Britain back VV. However, many workers from the said countries were in essence denied the right to vote by the state authorities through an extremely complicated procedure. Voting via the internet was something for specialists. After casting an electronic vote, these voters had to be ready to receive telephone calls from the election commission, KOZ. This opened the door to manipulation. Voter turnout was just over 44 percent, slightly more than in the last election. Kosovo has officially 2.8 million inhabitants.

VV leader Albin Kurti is considered a charismatic speaker and scored more than 370,000 personal votes. This is more than the amount of votes that Ibrahim Rugova had achieved in 2001 at the peak of his popularity. VV describes itself as a social democratic party. Although its main roots are to be found in the popular nationalist movement that led to Kosovo’s independence, the main emphasis laid by Kurti in his policies is on social questions and this is the main reason for the dramatic rise in support for VV. Its programme, seen in the light of day, is one of reforms, which addresses some of the fundamental needs of the working class and youth. It calls for an end to the privatisation of Kosovo's key resources and mineral wealth. Other demands include a drastic increase in the minimum wage, the introduction of compulsory health insurance and unemployment insurance, the protection of workers' rights in the workplaces and controls on workplace safety, an increase in pensions and equal pay for equal work. The latter has particularly appealed to women. The percentage of young women who voted VV is well over 60 percent. The demands in favour of workers and youth in particular have mobilised many votes for VV.

Those most affected are the elderly, the disabled, residents of small or remote towns and communities, and members of non-Serbian minorities such as Roma, Gorans and Ashkali. Poverty in Kosovo also affects other areas: education is underfunded, with schools teaching in three to four shifts. The health data of the population are among the worst in South-Eastern Europe. This is now particularly noticeable in the coronavirus pandemic. Kosovo is a COVID-19 hotspot. The biggest "employers" in Prishtina are call centres, where people work closely packed together without any social distancing.

In Kosovo, the Euro is the national currency, and prices are largely comparable to those in Central Europe, except for coffee and cigarettes. The crisis is hitting hard. In the course of 2020, GDP shrank by more than 8 percent. Unemployment is close to the 30 percent mark, although this is only an official figure. In reality, young people in particular do not register at the unemployment offices. Kurti has now promised first and foremost "new jobs" and "better pay". Above all, in his speeches he targets the mafia, which, in his words, "lives in luxury, launders money and pays workers badly".

As a matter of fact, the capitalist privatisation process since the 1990s has been an absolute disaster for Kosovo. The main investors are Turkish, US and German companies, as well as German and Austrian banks. At the same time, strong mafia structures have been the main beneficiaries of capitalism. Corruption and bribery determine the state's actions at all levels.

The Turkish company Limak took over the airport "Adem Jashari" near Prishtina a few years ago. Here, too, wages were cut and workers sacked. In 2010, a strike at the airport was brutally suppressed. The arrest of the local trade unionists there was broadcast live on television. This was meant to signal what could happen to any workers who dared to resist privatisation. Nevertheless, the privatisation of the Post and Telecommunications (PTK) to a dubious company from Hamburg failed, as the workers threatened an indefinite strike. For a few years now there has been a certain reactivation and radicalisation of the trade union movement, which has now also been reflected in the VV election victory.

In the election campaign, Kurti clearly spoke out against the privatisation of public enterprises and national wealth, as in Trepca in northern Kosovo. Trepca was once the world’s third-largest mining site of chrome, nickel, copper and lead. In the old days, 20,000 workers were employed in and around Mitrovica in the extraction and processing of these raw materials within the framework of a state combine.

The fact that in Kosovo, a party with a programme of social reforms won the election, is significant. The stumbling block is that the VV leadership does not want to break with capitalism, and even modest reform demands in the interest of workers and youth are not compatible with the weak capitalism of Kosovo. It is therefore urgent to strengthen the radical left elements in VV and fight for a clear socialist programme. A radicalisation and interest in Marxism is reflected in the numerous Marxist reading circles that have been mushrooming in Prishtina for some time.

Officially, it is claimed that there are no tendencies or factions in VV. But this does not correspond to the truth. Given its origins, the party is a coalition between different social forces, stemming out of a radical left-nationalist tradition. However, it has gained the support of the working class and the youth. The building of a truly Marxist current in the traditions of Lenin and Trotsky inside and outside VV is all the more urgent since the VV leadership, as soon as it gets into government, will be subject to enormous pressure to abandon its programme of reforms. Such pressure will come from the most conservative elements within the party, but also from imperialist influence. This contradiction is already visible when analysing VV's electoral list, which also included candidates of a very bourgeois and conservative background, including people like Kosovo’s Interim President Vjosa Osmani, who came from the LDK.

Despite all these considerations, VV's election victory is an important step forward for Kosovo and for the entire region. For the first time in many years, a party with a programme of progressive reforms has won an election. This can have a positive effect on the whole region. 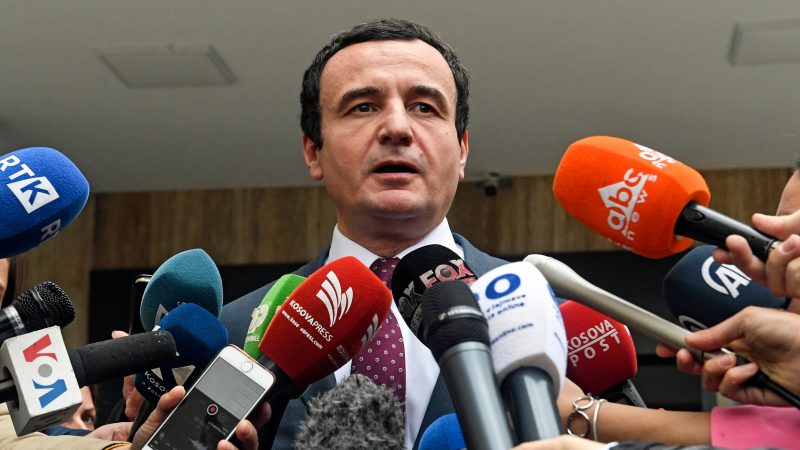 For the first time in many years, a party with a programme of progressive reforms has won an election in this region / Image: EURACTIV

However, the situation is far from stable and could explode should there be an attempt to prevent Kurti from taking power. The KOZ election commission has removed three VV candidates from the electoral list, including Albin Kurti. The formal justification is an incident involving the use of tear gas by VV deputies in parliament in 2018. According to KOZ, Kurti could therefore not become prime minister. But as a matter of fact Kurti is the most popular in terms of personal preferences. If KOZ persists with their attempt to prevent him from becoming prime minister, this could lead to massive tensions. Mass protests and a general strike would be possible responses. However, it is unlikely that KOZ will stick to this stance. Otherwise, in view of the sharp social tensions and poverty, there would even be the theoretical possibility of a revolutionary uprising.

The question of the so-called peace process with Serbia was at the centre of the intrigues that led to the sinking of Kurti’s government last year. During the election campaign, Kurti called for unification with Albania without discriminating against the national minorities in Kosovo. Again and again, he spoke out in favour of a dialogue with the Serbs living in Kosovo, which he regarded as more important than “dialogue” with the government in Belgrade.

For Marxists, the right to national self-determination is a democratic right. This must also apply to Kosovo, especially since all the big imperialist states warn against unification of Kosovo with Albania. Of course, the imperialists prefer small states in the Balkans because they can rule better over mini-entities. However, the question of national self-determination cannot be approached from a purely ethnic point of view. In the context of the Balkans this could have extremely reactionary implications. What the exploiters above all do not want is a unification of the working class and left forces in Albania and in Kosovo, let alone the unification of the working class around a revolutionary socialist programme in the whole of the Balkans.

Unification of Kosovo and Albania on a capitalist basis will not solve the problems of the working class either in Kosovo or Albania. The capitalists, as much as the imperialist looters of the wealth of these countries, will oppose tooth and nail any real progressive reform from being implemented. After all, in Albania, the miners and oil workers have been increasingly forced to fight for their rights and for the expropriation of the mine owners in the past few years. Thus, the signs are pointing to a sharpening of the class struggle, sharp changes and shocks that will also radiate to the neighbouring states.