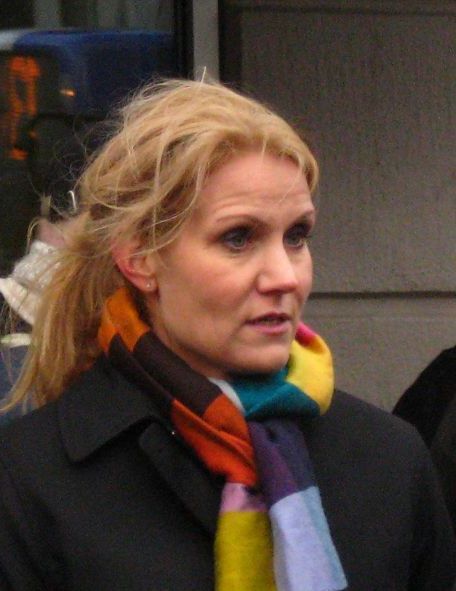 The Danish Social Democratic prime minister was booed off stage in several cities as the country witnessed the most dramatic May Day for the past two decades. Her party is now down to the lowest levels ever in the polls, following massive attacks against workers and youth.

The mainstream media is always trying to proclaim the death of the Workers’ International Day of Struggle and its conversion into a mass day of barbecues and alcoholic intoxication. This year’s rallies, however, turned out to be quite different from previous years.

The Social Democratic Prime Minister, Helle Thorning, was not allowed to speak as the leaders of the workers’ parties traditionally do at May Day rallies across the country. Instead her speeches were drowned out by whistling and booing. The dissatisfaction with her government has reached such levels that she had cancelled what would normally have been the most important speech, at the main rally in Copenhagen where tens of thousands gather every year.

The protests that she was met with took place in one city after another as she travelled throughout the country to give her traditional speeches. In Aarhus, the second largest city of Denmark, she was met by a very angry crowd. As a reporter form Politiken.dk said: “...in Aarhus she was thrown to the lions... The protests were extremely noisy and aggressive. She didn’t get a chance.” He continued by stating that 85 percent of the thousands who had shown up for the May Day rally in Aarhus had come in order to boo the prime minister and not allow her to speak.

In Aalborg, another major city of the country, she had to skip a third of her speech because the crowd were booing and throwing tomatoes and empty beer cans at her. In the end Thorning-Schmidt had to leave the stage under the cover of her security guards. Meanwhile a shop steward from a nearby steel factory managed to gather DKK10.000 (£1100) amongst the present, for 11 striking refuse collectors from the city.

But these dramatic events where not isolated to Helle Thorning-Schmidt. The same happened to Minister of Economic and Business Affairs, Anette Vilhelmsen – who is also the leader of the Socialist People’s Party [SF] –the Social Democratic mayor of Copenhagen as well as other ministers and top government figures as they travelled around country. 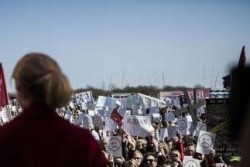 According to some reports there were some anarchist elements that played a role in the events of May Day. It is also clear that in the coming days the media will try to portray the events as isolated and caused by a very small minority detached from the mass of the population. But the involvement of anarchist “Black Block” groups was mainly in Copenhagen where these groups have a small base. It does not explain what happened in many other cities across the country.

On the contrary, the fact that this year the anarchist march, which was not very large, was the largest youth march in the capital is an indication of the enormous anger and frustration that exists against the leaders of the traditional workers organisations among the youth. These leaders have betrayed even the most modest hopes that the masses had in them.

In fact, it was evident that no matter who initiated the booing against the speeches of the party leaders, it was clearly an expression of the massive anger that is building up within the Danish working class. The May Day protests are a clear sign that the leadership of the workers’ parties are completely out of touch with workers and youth that they are supposed to represent.

Over the course of the last few months the coalition government, led by the Social Democrats, have looked more like a bosses’ government than one dominated by workers’ parties. On top of the many cuts that were introduced last year, they started this year by introducing massive cuts in student grants and unemployment benefits, while at the same time introducing tax cuts for the same amounts for businesses.

Moreover, the government and the municipalities have been waging a vicious campaign against the national teachers’ union. During this conflict the teachers have been locked out for more than a month, leaving hundreds of thousands of families in a desperate situation with no or halved income. Even after the leaders of the unions practically begged the government to intervene, the lockout was kept going for several weeks. Finally, when the government intervened earlier this week it did so by disregarding all the demands of the unions and transforming the agreement proposed by the municipalities into law.

It was clear that the whole campaign was aimed at crushing the traditionally strong teachers’ union in order to clear the way for further attacks on the trade union movement. Many of the thousands who were booing the “leaders“ of the workers’ movement yesterday would probably have been teachers and their families who have been put under immense inhumane pressure over the last few months.

Paradoxically the Social Democratic government, which broke more than ten years of liberal governments, has led the most anti-worker government for many years.

The Liberal Minister of Finance, Claus Hjort Frederiksen, who served under the hated right-wing government, commenting on the attacks against the teachers, said: “I would never have dared to do it. Honestly, for fear of the repercussions. And therefore it is extremely bold, what the Social Democrats are doing. I’ll take my hat off to that.”

For the millions of workers of the country this news has not been as welcome as for the ex-minister. The rating of the government in the polls has fallen to a historical low. The Social Democrats recently polled 14.4%, while the SF is hovering around 4 percent. The third coalition partner, the Radical Left (which is a liberal party) is polling around 8 percent.

The obvious dissatisfaction with the workers’ parties has until now expressed itself in three mass demonstrations over the course of April and March, a scenario that the country has not witnessed since 2007-8. The exceptionally open expression of anger that May Day saw all over the country is a continuation of this process.

In the meantime, the Red-Green Alliance [RGA, known as the Unity List in Denmark], an alliance of different left groups, is gaining in the polls (14.9 percent in the most recent poll compared with 6.7 percent in the elections of September 2011) and membership, which has tripled to almost 10,000 over the course of the past few years, because they are seen as being opposed to the right-wing politics of the government.

In contrast to other speakers from the workers’ parties, Johanne Schmidt-Nielsen, the spokesperson of the RGA, was not booed around the country. In her speech she correctly condemned the right-wing path of the government and its brutal attacks against the teachers. But at the same time she condemned the booing of the crowd and appealed to let the speakers finish their speeches.

This is very symptomatic of the parliamentary leaders of the RGA. On the one hand they correctly criticize the government for its obvious capitalist politics, but on the other side they refuse to threaten to bring it down – which they could do since their votes are crucial for keeping the government in place. In this way they are implicitly supporting the same bourgeois policies that they are criticizing.

Sooner or later this will also dawn on the workers and youth, for whom words are not enough. What the masses need and demand is action against the anti-working class measures of the government and the bosses around the country. In fact the contradiction between the words and deeds of the RGA is already beginning to have an effect. The May Day traditional warm up rally of the RGA was much smaller than in previous years – despite its massive growth – and the reception of the party spokesperson was not particularly cheerful either.

The leaders of the RGA should not condemn the rightful anger of the masses that have seen the full burden of the capitalist crisis unloaded onto their shoulders. What the RGA should do is to draw the line and say that it will not participate in making the workers pay for the crisis. They must demand the leaders of the Social Democracy and the SF break with the liberal Radical Left party and with the current bourgeois policies of the government. Furthermore, they should base themselves on the anger amongst the workers and youth and try to give it an organised expression, channelling it onto the path of a socialist transformation of society.

The situation is clearly turning in Denmark, this once so calm country in the heart of Scandinavia. The public expression of anger seen on May Day has not been seen for many decades.

The new government is introducing more cuts and attacks than the old right-wing government. For many workers and youth this has come as a shock. They had many hopes in the new government and now they feel betrayed because they thought that a new workers’ government would change the course.

But the main problem is not this or that leader, but the system that they choose to defend. Capitalism today is in a complete impasse and not even the little Scandinavian kingdom of Denmark will be bypassed by its crisis. Within the confines of the system there is only one solution – to attack the working class and exploit it further.

Only through a complete break with the system, by expropriating the capitalist class and nationalising the commanding heights of the economy under workers’ control can the full potential of society be realized.