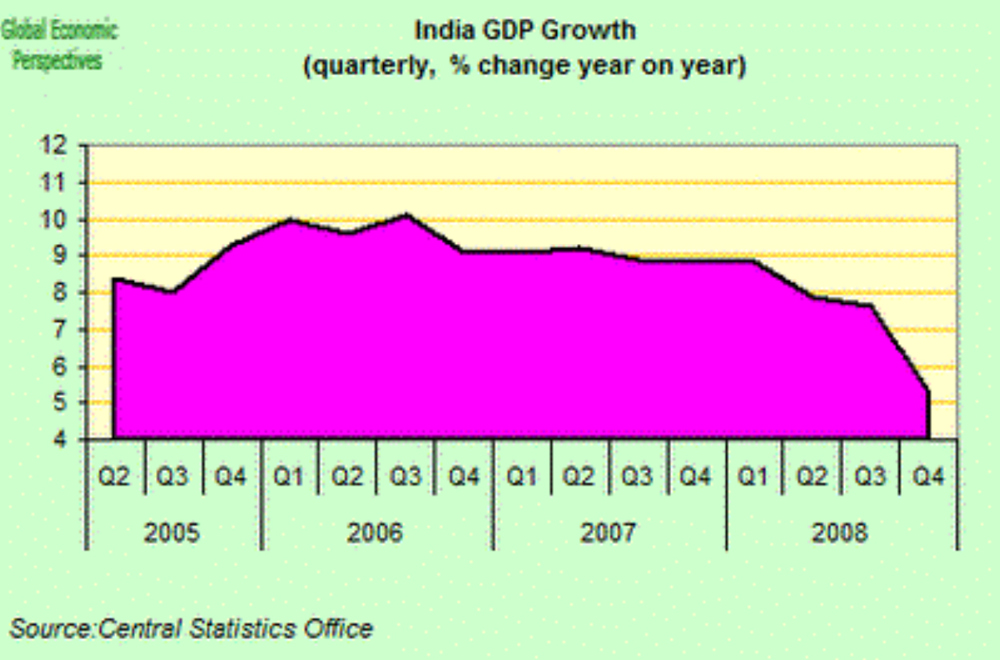 The Indian economy has undergone a long period of high and sustained growth. It remains a country of huge contradictions, with immense polarisation of wealth. And yet, in spite of all the propaganda about the state being “bad”, without it Indian capitalism could not have developed as it has.

Traditionally India has had a very large state sector. State Owned Enterprises in India in the year 2000 still constituted a large part of the economy and made up more than 50% of the gross domestic capital formation. There were as many as 300 central SOEs, and probably a few thousand at the state and municipal levels. (Source: http://www.iimahd.ernet.in/psuindia/).

india annual GDP growth (%) Wikipedia has the following to say about the Indian economy in the past: “Indian economic policy after independence… tended towards protectionism, with a strong emphasis on import substitution, industrialization, state intervention in labor and financial markets, a large public sector, business regulation, and central planning. Five-Year Plans of India resembled central planning in the Soviet Union. Steel, mining, machine tools, water, telecommunications, insurance, and electrical plants, among other industries, were effectively nationalized in the mid-1950s. Elaborate licences, regulations and the accompanying red tape, commonly referred to as Licence Raj, were required to set up business in India between 1947 and 1990.”

India still has five-year plans. It is presently in its eleventh (2007-2012). However as of the early 1990s an extensive programme of privatisation has been implemented. In Aspects of India’s Economy we read the following:

“India’s economy has seen rapid growth since 2003-04. The scale of this growth was not anticipated by many of the critics of the neo-liberal economic policies. In particular the following features were unexpected:

(i) GDP growth has been sustained for five years at high levels, and is widely predicted to continue at high rates well into the future.

(ii) Rapid growth is no longer restricted, as in the past, to the services sector, but has extended to manufacturing.

(iii) There have been unprecedented increases in the rates of savings and investment.

Among the proponents of the current economic policies, these developments seem to prove that India is on its way to join the ‘developed world’, indeed, even become an ‘economic superpower’.

At the same time, the proponents of the present policies have been unable to explain why, amid this extraordinary boom, the following have persisted:

(i) Mass malnutrition worse than that of sub-Saharan Africa prevails, with average calorie and protein consumption actually declining over the period of liberalisation.

(ii) The growth and quality of employment have been abysmal.

(iii) Real wages are stagnant/declining in the economy as a whole.

(v) There is a profound crisis of the small peasantry (highlighted by their suicides).”

And the cure to the problems of the Indian economy are the following: “The neoclassical economists claim that Government intervention is harmful…. For industry, they demand that labour laws providing security to workers be relaxed, and that the remaining sectors under the public sector be privatised or ‘opened up’ to private capital. Restraints on the entry of foreign capital into various sectors should be removed. Tariffs on imports should be reduced to very low levels. Such subsidies as remain, hidden or open, should be scrapped.”

As we can see, the Indian economy over a period spanning many decades was a state-led form of capitalism, with a very large state sector. Even today the state plays a significant role. Of course, today’s “neo-liberal” bourgeois economists see the state sector as an evil that must be eradicated and are pushing for this to be carried out.

However, the fact remains that Indian capitalism could not have developed without the key role of the state. This has led some economists to talk of “India’s socialist past”, as if a strong state sector and “five year plans” amount to “socialism”.

Nothing could be further from the truth. The Indian economy is capitalist, albeit a semi-developed dominated capitalist economy with many internal contradictions and with immense disparities in levels of development between different regions. In some areas we see modern industry; in other areas we see almost feudal-like conditions and immensely poor peasants.

It has some of the characteristics of China’s. It also has many differences of course. India has never had a planned economy in the way China had under Mao. In China under Mao capitalism had been abolished. In India, on the other hand the state’s role was to promote capitalist development where the local bourgeoisie was incapable of doing so.

The experience of India can help in understanding that one can have a very big state sector, even with “five year plans”, while still being a capitalist system.

In the recent period of the past thirty years or so the tendency everywhere has been to privatise, to whittle away the state sector, and put everything at the mercy of the market. This is actually a symptom of a crisis of the system as a whole. It reflects the search for profitable outlets for private investors. As they can’t make a profit playing according to the “rules of the market”, they leech off the state, buying up cheaply what has been built up with public money. This has also happened in India.

However, no one can deny that what development was achieved in India after the Second World War was only possible through the intervention of the state.