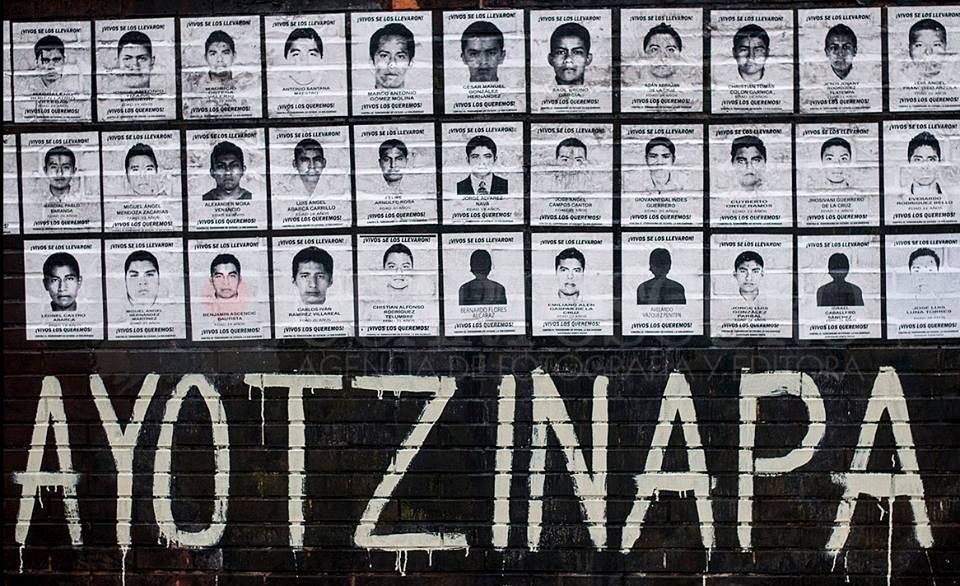 It is one year since the forced disappearance of 43 teacher students from Ayotzinapa in the state of Guerrero, Mexico on September 26.

Despite government obstruction, lies, misinformation, threats and violence, the families and comrades of the students have continued a heroic campaign for justice which has spread internationally and highlighted the extremely rotten nature of the Mexican capitalist state and its links with organised crime. Now, a report by an independent group of experts has demolished the “historical truth” put out by the Mexican government.

What the government described as the “historical truth” of the events on the night of September 26 is as follows: a group of Ayotzinapa students had gone to the town of Iguala, Guerrero, to raise funds and commandeer coaches so they could attend a demonstration in Mexico City. They were attacked by the local police and then handed over to a criminal gang, Guerreros Unidos, which killed them and burnt their bodies in the Cocula rubbish dump. Motive? The students had been mistaken for a rival criminal gang.

This version would serve to close the case and put an end to the mass mobilisations for justice throughout Mexico and internationally. Mexican president Enrique Peña Nieto callously told the families to accept the students’ death and “get over it”. A few local officials would be made scapegoats and the whole embarrassing business would be forgotten.

The report of the Interdisciplinary Group of Independent Experts (GIEI) destroys the government version on a number of crucial aspects.

First of all it establishes very clearly the participation of state agents, from the Army, the federal and state police and the National Defence Ministry intelligence in the disappearance. State and national officials, who had the students under constant surveillance, were informed of the attack as it was taking place.Secondly, the GIEI established that it is physically impossible that the bodies of the 43 students were burnt in the Cocula rubbish dump.

Thirdly, the GIEI concludes that the attack took place in several locations over a period of many hours, pointing towards the existence of a sophisticated command structure taking decisions on the spot, which goes beyond the capabilities of a local criminal gang.

Finally, the report details a pattern of deliberate and systematic destruction and hiding of evidence by the state at different levels, including the investigation carried out by the State Attorney’s Office.

Not only this, but the report points to a plausible explanation for the brutal attack on the students. The experts have determined that there was a fifth bus which was commandeered by the students that night. That bus belongs to a company which is used for the transport of drugs and drug money, from Guerrero to Chicago and vice-versa.

The students were unaware of the fact, but they might have taken a bus which was being used by a drug cartel and that would be the reason for the attack. Still, if that were true, it would point to the very close links between the state and organised drug cartels, affecting all political parties and all levels of the state apparatus.

The attack on the students was carried out by local and federal police. The army was also present and participated in the subsequent cover up. The national government was kept informed of the events in real time, through the C4 command coordination centre which was monitoring the movement of the students and to which the different police forces reported. The disappearance of the fifth coach from the official report on the attack points out to responsibilities in the cover up reaching the highest echelons of state power: all the way up to the State Attorney’s Office and the President himself.

In other words, the Ayotzinapa 43 justice movement was right all along in saying “Fue El Estado” [“It was the state”]

The parents and friends of the students have maintained a sustained movement for a whole year, demanding justice and truth. The forced disappearance of the Ayotzinapa students has brought to light the rottenness of the capitalist state in Mexico and its links to organised crime to the point where it is impossible to say where one begins and the other ends.

As a result it has become a focal point for all the struggles in Mexico and at the same time has been met with brutal and increasing repression on the part of the state.

This is a struggle which questions the whole edifice of the capitalist state in Mexico. The report is just one step towards establishing the truth. Justice will only be made when the Mexican workers, peasants and youth take power into their own hands and brush aside this horrible rotten regime which is capitalism.