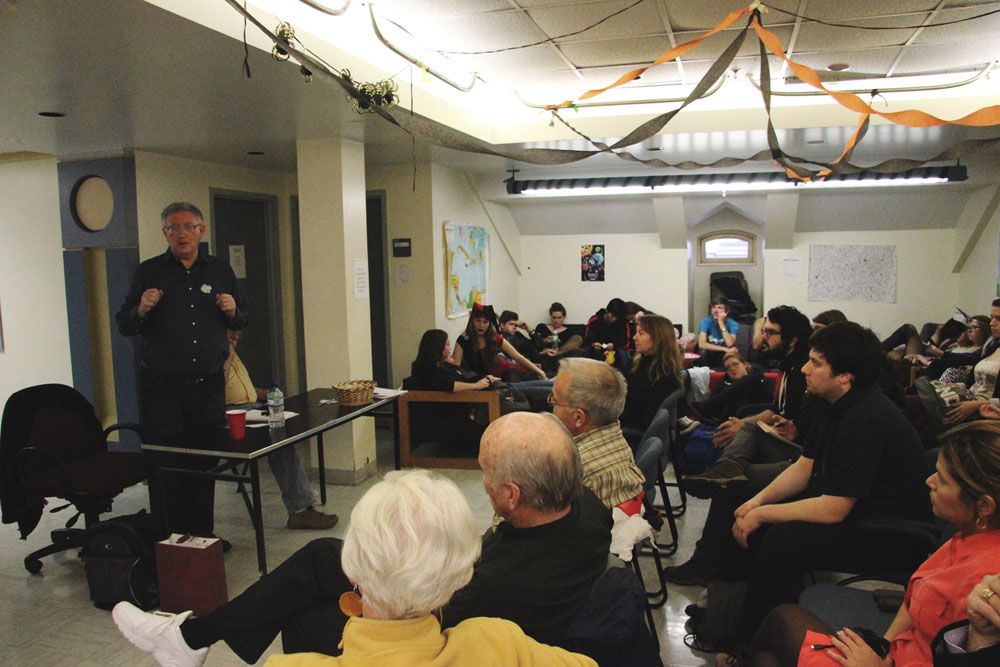 Over 50 students and teachers gathered at Dawson College in Montreal on Wednesday to hear Alan Woods speak on the Venezuelan Revolution. There was a healthy discussion on the progress of this magnificent movement, as well as some of its challenges. This was the third successful gathering in Montreal, and marked the last in an energetic series of events across Canada on Alan Woods' North American speaking tour. The US leg of the tour begins in the next days, and is sure to be a similarly resounding success — especially in light of recent mass struggles of the youth and of the trade unions.

Alan began by explaining that the Venezuelan Revolution has been the victim of a most vociferous campaign of slander and lies by the international media. The press has been intent on presenting president Hugo Chávez as a dictator, and has largely ignored the gains of the Venezuelan workers and poor in the last decade. They have done this to undermine the revolution, as well as to prevent its spread as a shining example to others around the world.

Alan pointed out that Chávez has won the most elections and popular referenda of any current political leader on the planet. Despite being eager to find a basis for undermining Chávez’s reputation and the movement behind him, the corporate press have not dared to claim vote-rigging; such a lie would be far too obvious. The Carter Center, far from being a friend of socialism, has even recently recognized Venezuela’s electoral system as the best in the world. The bourgeois media have instead used other lies to distort the picture of Venezuela. As Alan said, they spent months leading up to the most recent elections trying to convince the world, “Chávez is finished, Chávez is old, Chávez is sick, Chávez is dying, Chávez is washed out.” On the other hand, Henrique Capriles, his main opponent in the recent presidential elections, was praised unconditionally. Alan gave some examples of the ridiculous treatment of the right-wing candidate on the part of the press: “He is young, he is healthy, he is good in bed — no perhaps they did not go quite that far,” which got a good laugh from the students. Indeed, on the morning of the election on 7th October, the Spanish daily ABC ran a story declaring that right-wing candidate Henrique Capriles had won! In fact, not only was Hugo Chávez re-elected, but he won by a convincing majority. These tricks have but one purpose — to undermine the democratic will of the Venezuelan people.

The bourgeois press has also made Alan Woods himself a target of their attacks, labelling him as the “Marxist” or “Trotskyist advisor to Hugo Chávez”, according to Canada's own Globe and Mail . These articles represent the ruling class' growing fear of the influence of the Marxists, whose program of nationalization of the commanding heights of the economy under workers’ control represents a serious threat. These ideas have gripped the imagination of the revolutionaries of the Bolivarian movement, even Chávez himself. Alan described how he was present at the mass meeting when Chávez put his notes aside and declared that he was a socialist for the first time, provoking massive applause. The local oligarchy and the world imperialists, particularly those in Washington, are keen to prevent a socialist planned economy from arising in Venezuela. Such a development would threaten the entire status quo of Latin America acting as a playground for big corporations who plunder the resources and exploit the masses of the region.

It is precisely such a socialist solution that Alan explained as being vital to the present situation in Venezuela. It is the private ownership of the banks, land, industry, and the media that is used by the Venezuelan elite to sabotage the revolution. Indeed, we witnessed an unholy alliance of right-wing army generals, big capitalists, US imperialist agents, and even the cardinal of the Catholic Church collaborate in kidnapping Hugo Chávez and attempting to smash the revolution in the 2002 coup d’état. The privately-owned media openly called for Chávez's undemocratic overthrow and even his execution.

Alan explained how in 1989, the Carlos Andrés Pérez government began implementing IMF-imposed austerity measures very similar to those being carried out today in Greece. This provoked a mass uprising in the barrios, with people coming out in the streets, looting shops to feed themselves and their families. This ended in the Caracazo massacre, when the army was ordered to fire on unarmed civilians; this marked the real beginning point of the current Bolivarian movement. This history stands as an ominous reminder of what is at stake if the oligarchy and the imperialists are able to defeat the revolution and return to power. 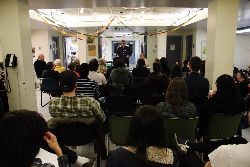 One weakness of Chávez, which was pointed out by Alan, is that he has actually been too soft on the counter-revolutionaries. None of the coup-plotters were jailed. Much of the right-wing press remains in the private hands of these people. The audience was given something to think about when Alan said, “If a newspaper in Canada or Quebec called for the overthrow of the government and the murder of Stephen Harper, such a newspaper would be immediately shut down and its owners jailed.” Yet, when a private media outlet has its licence suspended for not abiding by Venezuelan law, then it is deemed to be an attack on democracy!

Many of the professors and students present brought up questions on issues of inflation, transit, and crime in Venezuela. Some of the participants elaborated on the significant new investment that had been made to build adequate transit, especially to the distant barrios along the hills surrounding Caracas. Alan also explained the issue of inflation and crime as being a consequence of the continued attempts by the oligarchy to sabotage the revolution. Indeed, it has been widely observed that many of the right-wing paramilitary squads in neighbouring Colombia, which were often used to kill trade union leaders and leftist activists, had brought their drug-dealing operations into Venezuela.

Throughout the discussion Dawson college students as young as 16-years-old actively made contributions. Alan encouraged some of the initially timid students to ask questions, declaring that he was not Dracula and therefore didn't bite — a friendly joke for the many students present in full costume, ready for that evening’s halloween parties!

One student asked an excellent question on the topic of Bolivarian foreign policy, particularly as it relates to countries like Iran, Libya, and Syria. Alan explained that it was of course necessary for Venezuela to avoid the attempts of the United States to economically and diplomatically isolate the revolution. On the other hand, it was a mistake to lend an anti-imperialist or revolutionary credibility to the tyrants of Libya or the Islamic regime in Iran, who have a history of repressing and killing trade unionists, left-wing youth, and women activists. Indeed, it is precisely these forces who have played a most important role in defending the Bolivarian revolution in these countries. Alan explained that the only genuine allies of the Venezuelan people are the ranks of the international working class.

Attending the event was the Venezuelan consul-general and other consular staff, who eagerly picked up Alan's books that were on sale, as did many of the students. Some of the youth present mentioned that they were part of a program where they would be travelling to Nicaragua to observe and analyze the left-wing Sandinista government that had come into office in the 2006 elections. They found the presentation to be very instructive, and were enthused to discuss the traditions of struggle in Latin America.

Several participants also pointed out the relevance of the lessons from the Venezuelan revolution to the struggle that is now facing youth and workers in the advanced capitalist countries. In a sense, the inequality, unemployment and general impoverishment that sparked the Venezuelan revolution is more and more becoming a harsh reality for many in Canada. With the memory of the recent Quebec student movement still fresh on the minds of many students, the lessons to be learned from collective struggles around the world, and especially in Venezuela, are vital to discuss and digest.

It should be noted that the Dawson Teachers’ Union (DTU) helped finance the North American Marxist Speaking Tour, an act of solidarity that was very much appreciated. They put forward their endorsement, however, on the basis of one condition; that an event should be organized by La Riposte/Fightback on the Dawson campus! We are very appreciative of their assistance in helping the tour and bringing the lessons of the Venezuelan Revolution to Dawson.

The event finished with Alan putting forward the clear dilemma that is facing the Venezuelan revolution: socialism or the victory of counter-revolution that will eliminate the gains of the past decade. This same choice is being faced by workers and youth across the world, and he invited the students to join the struggle for socialist revolution and the progress of humanity as a whole. Alan ended with a message which he said Chávez himself has echoed, that the best way to defend the Venezuelan revolution is to fight for a socialist revolution in our own countries.