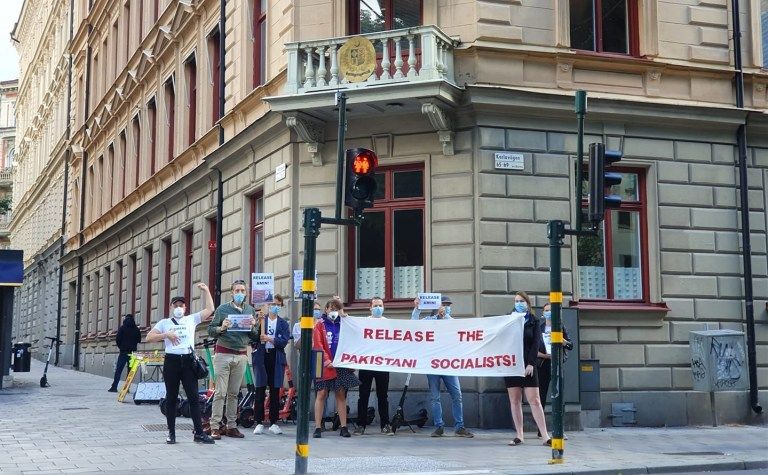 International solidarity is flooding in as people all around the world are demanding the release of Mohammad Amin. Comrade Amin was abducted by the Pakistan Rangers on 14 July 2020 in Karachi and his whereabouts are still unknown. His home was raided by the Rangers who forcefully entered his house without any legal permission. Originally published by the Pakistan Trade Union Solidarity Campaign.

Amin’s family are appealing to all government departments, including the judiciary, but so far there has been no outcome. However, there is a lot of international solidarity arriving from all over the world demanding the release of Amin. Here, we post pictures of international comrades showing solidarity with Amin’s family and demanding his immediate release. Protests have been arranged in front of Pakistani embassies in Berlin and Stockholm, with more to follow.

Pakistani and Swedish capitalists always go hand in hand. However, the workers and youth of Sweden reject these moves of their respective governments by showing their anger and concerns towards the Pakistani state's brutality and illegal abduction, by demanding Amin’s release. This display of working-class solidarity will be instrumental in leading towards ending the forces of oppression in Pakistan.

Germany is a key country of the European Union. German Banks are not only exploiting German workers but also workers of the rest of Europe and the world. In Pakistan, there have been many investments by German capitalists where exploitation is rife. But the German working class and youth have established links with Pakistani workers and are standing in solidarity with Muhammad Amin and all people illegally abducted by the state. Comrades organised protests in front of the Pakistan Embassy in Berlin. They also presented a letter to the Pakistani Ambassador, Muhammad Faisal. Also, comrades posted pictures on social media demanding the release of Muhammad Amin.

Click below for a video message (in the Russian language).