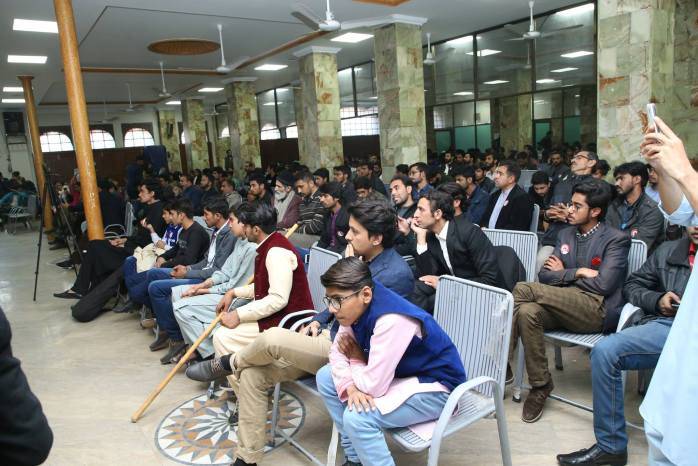 The marvellous national convention of the Progressive Youth Alliance was held in Lahore on 15 December, with the main demands of free education for all and restoration of student unions. Revolutionary students and unemployed youth from across the country gathered to discuss problems faced by the youth and how to organise to overcome them.

Read the original report in Urdu |

The convention was full of enthusiasm and fervour, which could be heard in the speeches from the stage and revolutionary slogans from the audience in the hall. One of the remarkable features was the presence of a large number of female students, who inevitably face huge difficulties in attending political events. The convention also raised the issue of harassment of female students in educational institutions, condemned such behaviours on campuses across the country and vowed to struggle against this scourge.

Initially, the convention was planned to be held at Aiwan-e-Iqbal auditorium in Lahore and all the arrangements were made accordingly. The district administration of Lahore had allowed this gathering and a No Objection Certificate (NOC) was issued after a due process, more than a month in advance. But just one day before the convention, this NOC was revoked and the management of Aiwan-e-Iqbal was instructed to return the deposited payment for this event.

This was a big shock for the organisers as it was a clear attack on the basic rights of the students who were struggling for the right for free education at all levels and restoration of student unions. Posters advertising the convention were already pasted around educational institutions across the country and thousands of invites had been distributed. The campaign on social media also got a huge response and large numbers of students from Lahore were preparing to attend the convention from various institutions. The organisers of the event immediately rushed to the District Administration office to seek an explanation for this abrupt decision, but they were humiliated and threatened with dire consequences if they went on with the convention. Though they kept on demanding a clear reply as to why they couldn’t hold this event, they couldn't get any reason for it except that there had been pressure from "above". 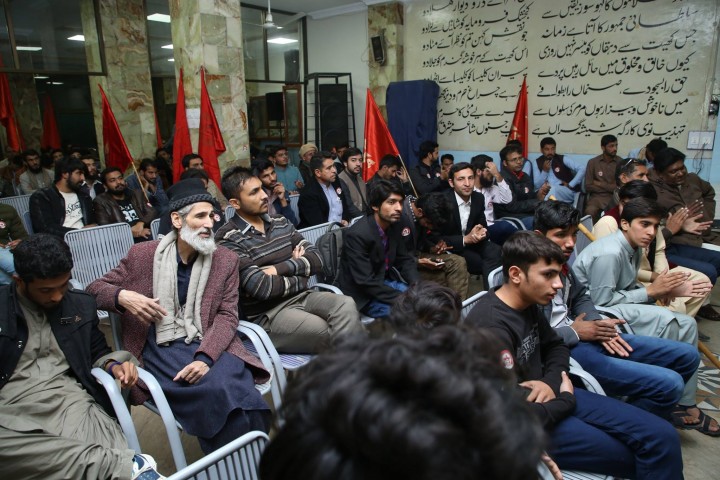 Despite several attempts by the state to derail the convention, the comrades overcame all obstacles and it went ahead, with over 700 attendees / Image: PYA

At this point, the organisers had no other option but to pick a new hall, and for that, they approached the largest trade union in Pakistan, the Hydro Union of Electricity Workers (WAPDA) who have a huge hall in Lahore. They immediately allowed them to hold this event in their hall without any payment for which the organisers were thankful to them. This also encouraged the youth to raise the slogan of "long live student and worker solidarity" at the top of their voices during the meeting.

A large number of students couldn't participate due to change of venue, while many other students from far off areas faced a setback due to a recent wave of price hikes in the country. The new PTI government has unleashed a huge currency devaluation and increases in the cost of living over the last three months, as a result of which transport fares and the cost of basic commodities have skyrocketed. This has created huge problems for the youth who had planned to attend this meeting for many months, many of whom were ultimately unable to come. In some universities, especially in BZU Multan, the administration delayed the final semester exams in such a way that students couldn't be free before this convention. The last exam, which was due on 14 December, was deliberately pushed back to 17 December. 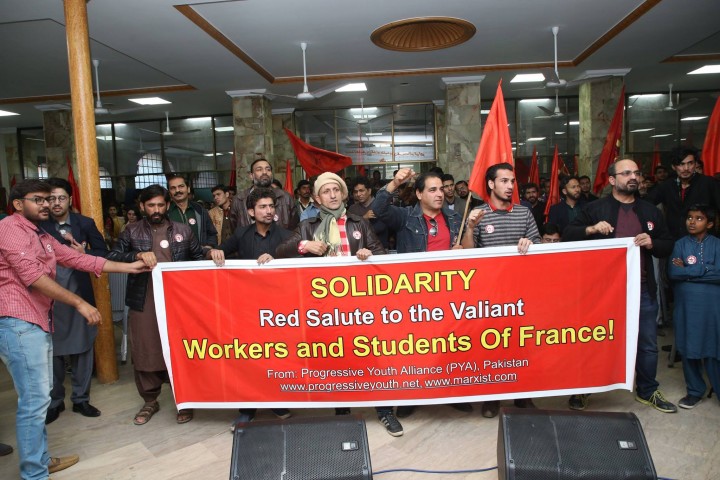 A resolution was passed in solidarity with the yellow vests protests in France / Image: PYA

The meeting formally started around 12:30, though many students recited revolutionary poetry and songs before the formal start. Fazeel Asghar chaired the convention, and the first speaker was Mahbaloos Asad: a student of Anthropology at QA University Islamabad. She explained the manifesto and aims of PYA and the plight of students across the country. She said that the increase in tuition fees in recent years has deprived a huge section of society of the basic right to education. In this country, where 70 percent are already illiterate these measures are becoming more and more disastrous. She also explained the struggle of students and workers in France and explained the heroic efforts of yellow vest movements. After her speech, a resolution was passed in solidarity with the protests in France and a standing ovation was given by the youth present in the hall.

After that, students from across the country came on the stage to express their views and highlight the issues faced by students and youth today. Some of the speeches were extremely fiery and got an overwhelming response from the audience, with thunderous applause and revolutionary slogans erupting at regular intervals. 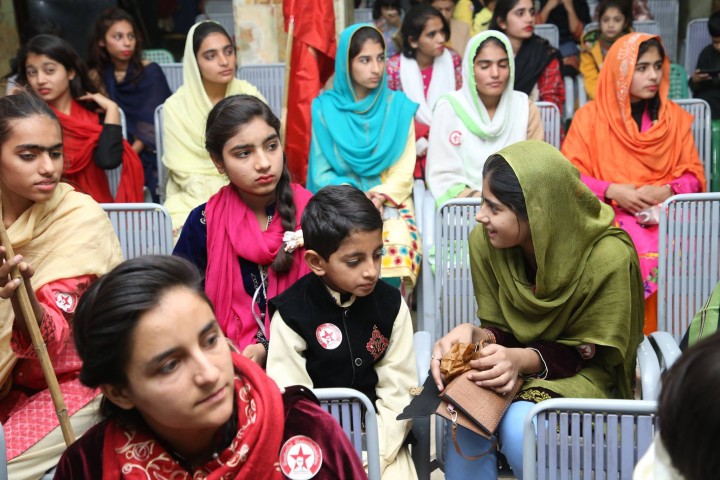 One of the remarkable features of the convention was the presence of a large number of female students, who inevitably face huge difficulties in attending political events / Image: PYA

Militants, poets and singers for socialism

Alongside the speakers, famous young poets and singers had also come to the convention, which raised a lot of enthusiasm from the youth. With their poetry and revolutionary singing, they enthralled the audience. Among the young poets were Tehzeeb Hafi and Usama Zoraiz, who recited their poetry to loud applause, while Mazhar Hussain Syed (a former worker of Pakistan Ordnance Factory in Wah Cantt) also recited his revolutionary poetry. Ali Aftab Saeed who is a popular singer in Pakistan due to his political satire and vlogs also came especially to attend the convention, accompanied by his guitarist. He sang his popular satirical songs on politics, Paisay ki Game and Aalu Anday, to amuse the audience. Classical singer Ustad Nasir Khan was the most-anticipated singer among the audience due to his renditions of the work of the iconic revolutionary poet, Faiz Ahmed Faiz. He also sang a song dedicated to Mashal Khan: a student of University in Mardan who was lynched to death last year by Islamic fundamentalists. The song was written by Paras Jan.

In the end, Fazeel Asghar presented some resolutions, which were adopted unanimously by the delegates. These include right of free education for everyone, restoration of student unions, strict measures and punishments for those involved in sexual harassment of female students, employment for all or unemployment allowance and nationalisation of all private educational institutions.

After that, ex-chairman of PYA, Farhan Gohar came on stage and presented the new central executive body of PYA, while the crowd raised slogans of socialist revolution. This body includes Umer Riaz from Islamabad as Chairman, AsfandYar Shinwari from Peshawar as Vice Chairman, Wali Khan from Quetta as General Secretary, Ubaid Zubair from Kashmir as Study Circle In charge, Rai Asad from Lahore as cultural secretary, Salma Baghi from Gujranwala as Finance Secretary and Fazeel Asghar from Multan as Information Secretary.

After the swearing in of the body, the new chairman Umer Riaz came on stage for his concluding address to the convention. First of all, he congratulated the organising team of Lahore for hosting such a marvellous convention amidst attacks by the state. He then said that the PYA has now come on to the stage and we will resist every measure of the state carried out against the people. We will not allow the rulers to snub the rights of common people, and especially those of students. He said that we will achieve our goal of free education at all levels and restoration of student unions at any cost. We will not hesitate from any sacrifice to achieve our goal. He said that we will also stand with the working class, shoulder to shoulder in their every struggle, and will fight against the oppression, misery, disease and poverty prevailing in this country. In the end, he appealed to all students of the country to join the PYA and said that we will set up registration camps in all universities to help the students to join. He also announced that the organisation would start nationwide agitations soon, to carry forward the struggle of free education and restoration of student unions. 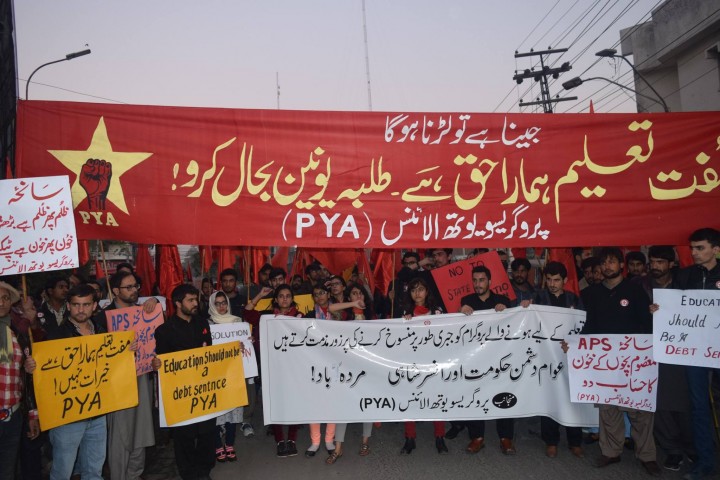 After the convention, a rally was held that marched from the Bakhtiar Labour Hall to Lahore Press Club, calling for students' rights / Image: PYA

After that, a rally was held that marched from the Bakhtiar Labour Hall to Lahore Press Club, calling for students' rights. The participants were also holding a banner against the oppressive measures of Lahore district administration and Punjab government. Placards remembering the martyrs of Army Public School Peshawar and condemning their barbarous killings were also present in the rally. The rally ended at, Press Club after which the participants dispersed peacefully.

On the following day, a cadre school was organised by the PYA, comprising two sessions: "the revolutionary ideology of socialism” and "Building the PYA".

The convention received good coverage in newspapers on the following day: 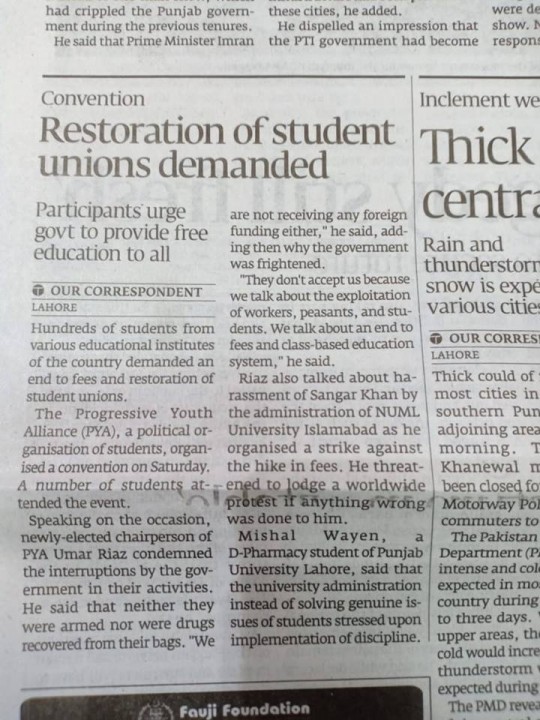