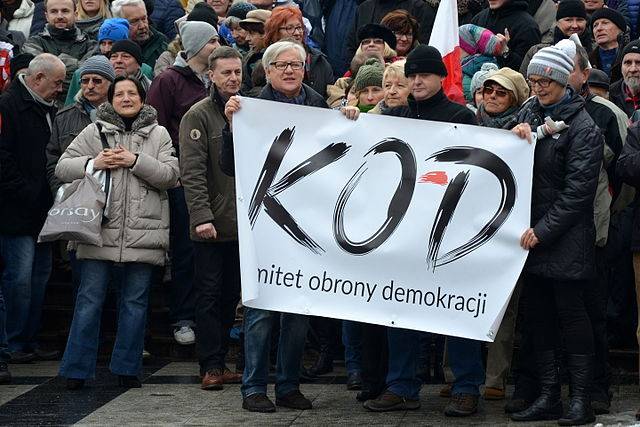 Saturday 7 May saw demonstrations take place in Warsaw as the Polish state is gripped by a constitutional crisis. The tectonic plates of Polish society are shifting and an eruption is on the horizon.

Since its electoral victories in May and October last year the right-wing Law and Justice party has clashed with the constitutional court and the EU. These clashes have spawned a liberal organisation called the Committee for the Defence of Democracy (KOD)which organised last weekend’s demonstration along with leaders of the bourgeois Civic Platform party.

The Law and Justice electoral victories last year were attributable in part to its populist rhetoric and ability to tap into the antiestablishment mood in Poland. The party’s promise to give 500zl per month to families with more than one child is popular in a country where the wealth gap has been increasing at a rapid pace for the last fifteen years. The recent implementation of this policy is part of the reason that the current constitutional crisis does not seem to have affected the party’s poll ratings.

But Law and Justice has also always based itself on a very conservative layer in Polish society. The restoration of capitalism in Poland was arrived at through round-table talks, with relatively free elections and a smooth transition of power, which often saw former “communist” bureaucrats take up new positions as capitalist politicians without any trouble. But there is a layer of people in Poland, increasingly older people, who were dissatisfied by this. They feel that the “communists” should have suffered some kind of punishment for the crimes of the Stalinist era and are angry that former “communist” politicians and managers were allowed to become state and industry leaders so easily after the restoration. Law and Justice has always represented these ideas and, although this rhetoric was toned down during the election in an effort to appeal to younger voters, it is clear by its recent actions that these ideas are as strong as they ever were inside the party.

This partly explains the behaviour of Law and Justice which has precipitated this constitutional crisis. Since the elections the party has purged many of the managers of state-owned industries from their positions. It has also taken over the state broadcaster, thereby stripping it of its formal independence and causing the European Parliament to launch an investigation into the actions of the Polish government. Most controversially the President (not formally a member of any party but who was a Law and Justice member until his election), has refused to swear in five new members of the constitutional court who were appointed by the previous government, picking another five to swear in instead. When the court itself ruled that this move was illegal, the government refused to publish the ruling. All of these steps have been taken with the justification that after eight years of Civic Platform rule, the state institutions are filled with lackeys of the previous government who are working against Law and Justice and therefore need to be removed.

Opposition to these measures has taken the form of demonstrations supported by the Committee for the Defence of Democracy, the Civic Platform and a new ultra neo-liberal formation called Modern, which took fourth place in last year’s parliamentary elections. For the most part these demonstrations have had little class content, with participants waving Polish and EU flags, and with slogans defending Poland’s relationship with the EU, the constitutional court and the 1997 constitution.

Critics of Law and Justice also point out that the party seems to be tending towards authoritarianism. Senior figures in the party have expressed admiration for the reactionary and illiberal government of Viktor Orban in Hungary and last week the leader of Law and Justice suggested that a rewrite of Poland’s constitution could take place. A proposed draft constitution published by Law and Justice in 2010 included powers for the President to dissolve the parliament without reason within six months of taking office and to allow the president to refuse ministerial appointments and rule by decree if parliament requested it.

This trend towards authoritarianism should be viewed in the context of a period of two to three years of increasing industrial struggle in Poland. Strikes, demonstrations and direct action by coal miners, farmers and broader layers of the working class have all increased recently. Poland’s economy is closely tied to that of Germany, which is currently stagnant. Economic difficulties, coupled with the expensive, populist promises made by Law and Justice before the elections, is a recipe for social unrest in the near future. With all of this on the horizon, Law and Justice is keen to concentrate power in its hands so it can crack down on the working class when they begin to move in a serious way.

Splits and divisions within the ruling class are extending beyond Poland’s own borders. The European Parliament has formally reprimanded the Polish government over some of its recent behaviour. The EU is now carrying out an investigation into the actions of Law and Justice, specifically the impact that they are having on the rule of law in the country. This in turn has exacerbated the divisions between the bourgeois Law and Justice and Civic Platform parties in Poland itself because Donald Tusk, the Polish President of the European Council, was formerly the Civic Platform Prime Minister and is seen by Law and Justice as an agent of his old party at the highest level of the European Union.

In addition, the catholic church in Poland, which plays a very influential role in society, has been buoyed by the reactionary social policies of Law and Justice to demand that the government permanently ban abortions in all circumstances (currently abortion is permitted in cases of rape, incest, severe fetal damage or threats to a woman’s life). This hardline position is causing a deepening of the divisions between the church and the trade unions which, at the time of capitalist restoration, used to be closely aligned in people’s minds (for example, it was common at that time to see demonstrators carrying portraits of Lech Walesa, the leader of Solidarnosc, alongside portraits of the Pope).

This division between two established pillars of Polish society is being mirrored by a developing rift between Polish bishops and Pope Francis. In advance of the Fourteenth Synod of Bishops held in October last year the bishops issued a letter to be read out in all Polish churches indicating that they would not support any change in the catholic church’s approach to questions of marriage and the family - the subject of the upcoming Synod. Meanwhile Pope Francis, who is trying to rehabilitate the catholic church after a series of damaging scandals in recent years, is in favour of relaxing the rules in this regard. Eventually the Synod agreed to allow catholics who are remarried or divorced to participate more in the life of the church, a decision which Henryk Hoser, the bishop of Warszawa-Praga, said in February 2015 would be a betrayal of catholic doctrine. In a country where the church plays such a central role, these shifts and splits between representatives of the ruling class who support either a hardline right-wing approach or a more reforming attitude are a harbinger of more severe crises to come in society as a whole.

The main element that is missing in Poland today is a viable Left organisation that can capitalise on the developing situation. This has allowed the populist promises of Law and Justice to gain something of an echo, and it has left the liberal Committee for the Defence of Democracy and Civic Platform as the only opposition to Law and Justice authoritarianism. The Left parties were smashed at the last elections, not winning a single seat. Without the development of a coherent Left party, the current battle between two wings of the ruling class in Poland will continue to dominate the political scene while the problems faced by ordinary people will go on unresolved.