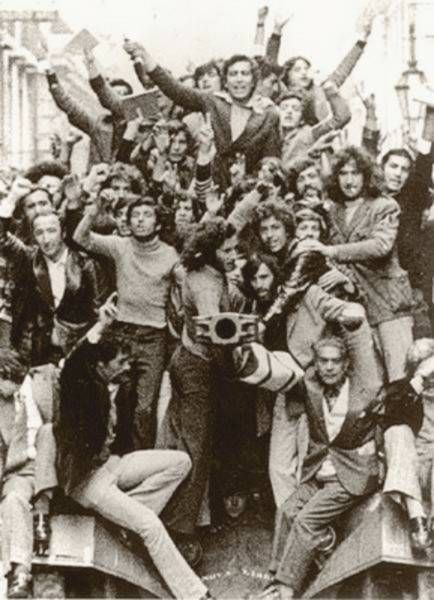 In 1974, Portugal was ruled by a military dictatorship, the oldest in Europe at that time, which had been established in 1926 by Oliveira Salazar. In the final period of the regime, workers' strikes, university student protests and the colonial war in Africa -  (Angola and Mozambique) which had bled the country since 1961 - forewarned of a collapse, despite all attempts of the Portuguese bourgeoisie and imperialism to prevent it. Portuguese capitalism was Europe’s most backward. Agriculture employed 40% of its active population, the colonial war devoured state resources and industry was close to collapse as a result of the 1973 economic crisis. Low wages were its only competitive advantage.

There was a ferment amongst the ranks of the Army and the colonial war was extremely unpopular amongst the masses. Soldiers and NCOs  fighting in Africa were demoralised and hated their superior officers who condemned them to die in a senseless war of colonial oppression. Many young officers and NCOs had been drafted from the universities, which had experienced revolutionary ferment, and were in direct contact with the revolutionary struggle of the colonial peoples they were fighting against. They shifted to the left and started to organise clandestine discussion circles.

When the officers, organised in the Armed Forces Movement (MFA) - an underground organisation of anti-fascist lower ranking officers - took the tanks out on the streets on April 25, 1974, they did not only overthrow Europe’s oldest dictatorship, they also opened the Pandora’s box of all the contradictions which had accumulated in Portuguese society for 48 years. Six days later, a million and a half demonstrators in Lisbon and four million in the rest of the country (out of a total population of 8 million) celebrated their first May Day rally in freedom.

The fall of the dictatorship gave the workers movement  an enormous impulse. A strike wave swept the country from north to south. Millions of workers joined the struggle, and the Intersindical trade union organisation (today’s CGTP), which had been born out of the dictatorship’s corporative “unions” and was led by the Communist Party (PCP), quickly organised up to 80% of the workforce in its ranks. The workers parties, Socialist and Communist, recruited tens of thousands of members.

The Portuguese revolution confirmed a historical law of the labour movement, which has shown to have no exception: when the workers feel the need to express themselves politically, they do so through their traditional organisations in the first instance.

The revolutionary initiative had shifted swiftly from the barracks to the working class, which caused panic amongst the ruling class in Portugal and internationally.

A provisional “Popular Front” type government was formed with the presence of the workers’ parties together with bourgeois “democrats”, as well as the MFA. The ruling class attempted to use the authority of the workers’ leaders as a brake on the revolutionary struggle of workers and peasants. Unfortunately, the leadership of these parties did not posses a program beyond achieving an “advanced” bourgeois democracy within the limits of capitalism.

Between June and September 1974 there were a series of reactionary attempts to put an end to the revolutionary struggle of the workers around the figure of the new president of the Republic, general Spínola, who disguised himself as a “democratic” Army officer. All of them failed, defeated by the revolutionary action of the workers on the streets. Spínola was forced to resign and a “left wing” Army officer, Vasco Gonçalves, was appointed as prime minister. This increased the confidence of the working class in its own forces. Hundreds of thousands of workers were beginning to question the ability of the capitalist system to solve their problems.

The peak of the movement

March 11, 1975, was the key point in the Portuguese revolution. On that day, supporters of Spinola within the Army made a new attempt at a military coup which collapsed in the space of a few hours. This reactionary attempt provoked the wrath of the workers. The working class, together with the soldiers, took up arms and set up checkpoints and barricades all over the country, chasing after the coup plotters.

The enormous pressure from the streets forced the government to take radical measures to contain the working class. There were widespread nationalisations, affecting 80% of the economy, including the banks and heavy industry. The large latifundia were colectivised through the direct action of the landless labourers, particularly in the South of the country.

In the April 1975 Constituent Assembly elections there was massive support for the workers parties, with the Socialist Party getting 38%, and the PCP and groups to its left another 20%.

The boycott by the capitalists against the economy led to the emergence of workers control in the factories, through committees elected by the workers themselves. Faced with the rapid decomposition of the state apparatus, so called “peoples’ power” emerged in the working class areas - embryos of workers’ power - which took it upon themselves to give out flats, set up sports and cultural centres, etc. Within the Army the discipline of the ruling class disappeared and the orders from the officers were discussed, questioned and voted on by soldiers’ assemblies. In order to fight against counter-revolutionary plotting within the army soldiers created their own revolutionary organisation: Soldiers United Will Will (SUV).

This was the crucial time at which the struggle should have spread. Conditions were ripe for the victory of the socialist revolution. The bulk of the economy was already in state hands and steps had been taken to create bodies of workers’ democracy in the factories, the neighbourhoods and the barracks. But they remained in embryonic form and did not fully develop due to the lack of a revolutionary leadership which could have centralised them and raised the necessary socialist slogans and program within them. In reality what we had in Portugal was a situation of dual power, between the embryonic workers’ power and an extremely weakened bourgeois state. In those days, the main organ of British financial capital, The Times, published an editorial article entitled “Capitalism is dead in Portugal”.

However, the policy of the workers’ leaders was disastrous. The PCP, the biggest and better organised, pursued the anti-Marxist and reformist two-stage theory: first, the struggle for “democracy” and only later on the struggle for socialism. This led them to raise alliances with a non-existent “left wing” bourgeoisie, and to act a brake on the workers’ movement with the argument of “consolidating democracy”.

The Socialist Party, for a time, raised expectations amongst the class, with slogans to the left of the PCP. But quickly, the right wing of the party, headed by Mario Soares, shifted the party to reformism and socia ldemocracy, provoking all sorts of splits and fissures within the SP.

After the defeat of their attempt on March 11, the ruling class changed its tactics. It unleashed an enormous boycott of the economy: investment strike, flight of capital, etc. Prices went through the roof, the trade deficit shoot up, and the national currency (escudo) collapsed. Through these means they were preparing to get a wider social basis for reaction.

In October 1975, the reactionaries called for demonstrations against “anarchy”. This was countered by a huge demonstration of 800,000 workers and youth shouting for socialist revolution. The heavy battalions of the Portuguese working class (in the shipyards, steel and construction) came out on the streets and surrounded Congress for 48 hours. Finally, the government was forced to retreat, conceding 45% wage increases in order to calm down the workers. In a grotesque way, the PCP was part of that government while at the same time supporting the workers’ struggle.

In that context of radicalisation there was an attempted left wing coup on November 25. In the heat of the struggle, the more radical army units (the parachute unit) came out on the street and took over Lisbon’s key points. But this was an adventure which took the working class by surprise. Only the shipyard workers came out in favour of the uprising. As a result, the movement became isolated and failed.

The confusion created by this “left wing” attempted coup was used by the ruling class to go on the offensive, relying on the passive attitude of the leaders of the workers’ organisations and the active support of the reformist pro-bourgeois elements within them. The absence of a mass marxist tendency within the big parties of the working class which could have challenged the reformist leaders, made it easier for the revolution to be derailed. That was a turning point in the revolutionary process. The SUV soldiers organisation was disbanded. The more left wing officers were removed and some of them arrested. Workers control in the factories, the land and the neighbourhoods was slowly but surely was rolled back.

After November 25, there was a counter-revolutionary process under a “democratic” form, which restored control of society to the capitalist state. The whole of the late 1970s was a convulsive period featuring a worsening economic situation, continuous government crisis, etc which lead to a presidential regime under General Eanes (elected President of teh Republic in 1976 thanks to the support from the SP). It was a new Bonapartist turn by the ruling class in an attempt to continue its task of liquidating the revolution’s conquests. This came to a conclusion with the coming to power of the right wing government of Cavaco Silva and his Social Democratic Party (PSD) in the mid-1980s. At the beginning of the 1990s, again with the support of the SP, the 1976 constitution - which talk of going to socialism as its aim - was reformed, opening the way for cuts, privatisation, etc. However, the land which was taken over by peasant organisations remained in their hands.

Forty years later the circle seems to be closing again. The severe crisis of European capitalism is hitting Portugal particularly hard. The country witnessed in 2012 and 2013 the biggest mass mobilisations since the 1974-75 revolution. There is an enormous ferment in society and a clear shift to the left. In this new epoch, the Portuguese working class and the youth posses an additional weapon: the lessons of the 1974-75 revolution. To put them in practice is the key task for the active layers and the most advanced elements in this new convulsive period which agitates Portugal and the world.