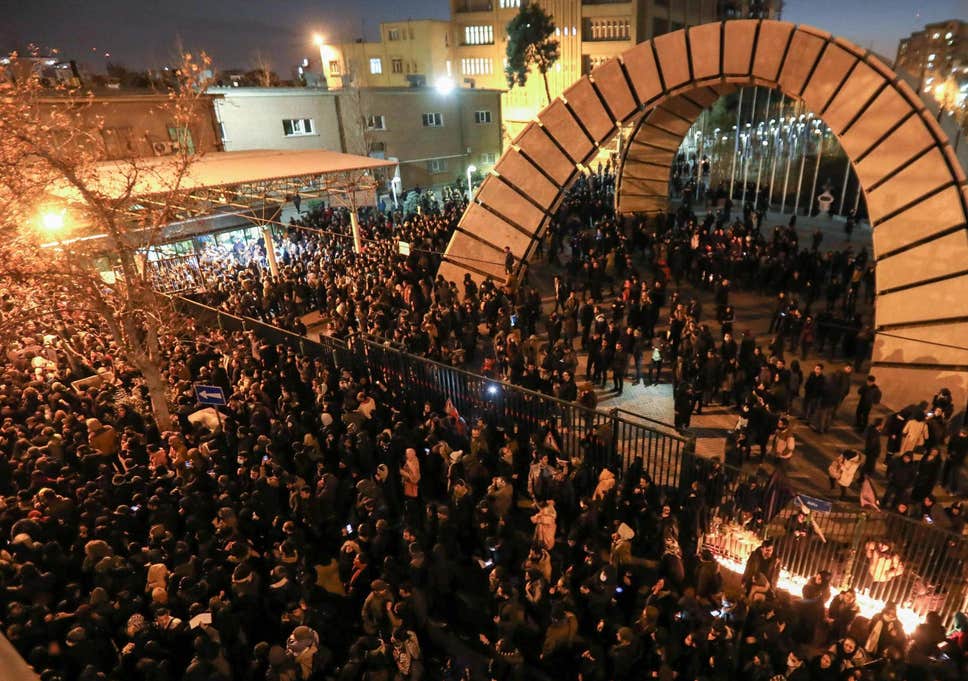 The admission of the Iranian authorities to shooting down a Ukrainian aircraft has caused a wave of indignation across Iran and led to protests in several cities. The regime, which was buoyed by the US killing of Qassem Soleimani, is now once again feeling the pressure of the masses.

Yesterday, after days of denials, the Iranian regime was forced to announce that it was in fact responsible for the shooting down of Ukraine International Airlines Flight 752. The plane, heading to Kiev, was carrying 176 passengers and crew, most of whom were of Iranian origin.

The announcement immediately led to an outpouring of anger, indignation and grief. Videos and images of dozens of protests have circulated on social media, but it is unclear exactly how many there have been. Reports from Tehran at least verify that Allameh Tabatabai University of Social Sciences, Amirkabir University of Technology and Sharif universities saw protests in the hundreds and low thousands. Riot police struck violently against the protests, but did not manage to repress them. Other protests were reported in Rasht, Sari, Isfahan, Mashad, Shiraz and Babol, Hamedan, Kermanshah and Orumiyeh. Many of these were led by university students, given that many of those on the planes were young people studying abroad.

While the protests were relatively small, they were very radical and angry. Some of the slogans heard were: “Liar, Liar!” “Khamenei is a killer, his leadership is null and void!”

“Our idiot leader is our shame!”, “scoundrel, scoundrel, give the students back! (referring to the students whose lives were taken when the plane was shot down)”, “We do not want an Islamic government”, “Death to the dictator”. One sign at Tehran university read: “You had no bloody right making a human error”. These were the words of Khamenei himself after the US – allegedly by accident – shot down an Iranian passenger plane in 1988, killing 290 people. In other places, people organised vigils for the dead, sang revolutionary songs and attacked the regime with very radical rhetoric such as “Death to the dictator!”

Two prominent TV presenters also resigned after one of them said that she “can not do it anymore”. Several filmmakers have also withdrawn from the upcoming Fajr Film Festival and a slew of politicians have gone onto the offensive attacking the government, the revolutionary guards and even Ayatollah Khamenei.

Mehdi Karroubi, a liberal who became one of the leaders of the 2009 Green Movement, said from house arrest that either Khamenei was a criminal for covering up the shooting of the plane or he was incompetent for not knowing it had happened. In any case, Karroubi suggested, he was not competent for office.

The crash came hours after Iran fired missiles at US military bases in Iraq in retaliation for the US killing of Iranian commander Qasem Soleimani. The regime has produced several versions about what led to this tragedy. It has claimed that that it mistook the plane to be a ballistic missile, that the plane made suspicious manoeuvres and so on. But all of these claims have been shown to be false. And it is exactly these lies upon lies that are the main driving force of the movement. On the one hand they highlight the incompetence of the regime and on the other hand its cold-blooded and calculating nature.

“Our killers are right here!”

Only a few days ago, the mood around the country was one of defiance against the US and patriotic euphoria after the killing of Qassem Soleimani and the subsequent reprisal by Iran. Soleimani’s body was paraded throughout Iran, bringing out hundreds of thousands, if not millions.

But the blatant cover up of the shooting of the Ukrainian airline has cut through that mood and amongst many layers, turning it into its opposite. People are furious at the cover up. More than anything because it was done in order to continue its charade and patriotic manipulation of the people. On top of the airline shooting, tens of people were killed in a stampede at Soleimani’s funeral procession in Kerman. Again, there is a strong feeling that the regime risked people’s lives for the sake of its reactionary propaganda.

For years, the Iranian regime has used the attacks of US imperialism to divert the attention of the people and to rally them behind itself. But in latter years, this strategy has proven less and less viable. Many people see Iran purposely provoking the US in order to divert the attention of the masses from the daily misery they have to suffer under the Islamic Republic. In the protests of the past few years, in fact, many slogans have been aimed at this regime’s demagogy itself. One of these slogans was repeated at some protests yesterday: “They say it’s America, but our [killers] are right here!”

Of course, on the other hand, the west has been trying to use the tragedy for its own benefit. Donald Trump and Mike Pompeo have both been sending messages of solidarity to the protesters. Reza Pahlavi, the son of the late Shah who is now supported by the US, accused Khamenei of being personally responsible for the tragedy. But these statements reek of hypocrisy. The US has imposed vicious sanctions on Iran, which amount to nothing less than a siege of the country. These have plunged the economy into a crisis and led to dramatically falling living standards. They are using the crisis to put pressure on the regime for their own narrow interests, which are diametrically opposed to those of the people of Iran.

The people understand this. A group of students from Amir Kabir University issued a strong statement, saying as follows:

“[I]n the past years, the presence of the US in the Middle East has caused nothing but chaos and instability. Our position towards this violating power has been decided beforehand. But at the same time, we are well aware that US adventurism in the region should not be an excuse for justifying internal suppression. If ‘national security’ has become a buzzword in these days, it is time for us to ask the security of which groups, classes and layers of society’?”

These words sum up the whole experience of the Iranian people and we fully support them. This movement, while still encompassing a minority of the most-advanced layers of society, is an anticipation of the mighty explosions which are to come in the next period. After the mass protests of November, the regime used the killing of Soleimani to stabilise itself. But this will solve nothing in the long run. The crisis of the regime is terminal and a new movement will erupt sooner or later sending shockwaves throughout the region and beyond.