Thousands of migrant workers in Qatar had their contracts cancelled and were forced to return home, in many cases without pay, as the Qatari government rolled out its plan to “[maximise] the reduction in the number of workers in the country” on the eve of the 2022 FIFA World Cup.

“In light of the above and in line with ADLSA [Ministry of Administrative Development, Labor and Social Affairs] directives to reduce inessential expatriate workforce during the period from 21 September 2022 to 18 January 2023, all Contractors shall prepare a strategic plan for workers’ leave which maximises the reduction in the number of workers in the country during the period. Further, it should not adversely impact the migrant worker’s well-being and established RPD [Road Projects Department] projects’ targets and objectives.”

The truth however is that workers have been sent packing to the countries they were recruited from under a cloud of uncertainty about their future. Many were not told if they would have jobs to return to. The circular’s plan to “not adversely impact the migrant worker’s well-being” is an empty phrase that the vultures that source easily exploitable migrant labourers from underdeveloped countries can and will simply disregard.

Qatar has a migrant workforce of around 2 million workers, which makes up roughly 95 percent of its workforce and over two thirds of its entire population.

A migrant labour recruitment system known as ‘Kafala’ (Arabic for ‘sponsorship’) is used in the Persian Gulf states such as Qatar, Saudi Arabia, and the United Arab Emirates. 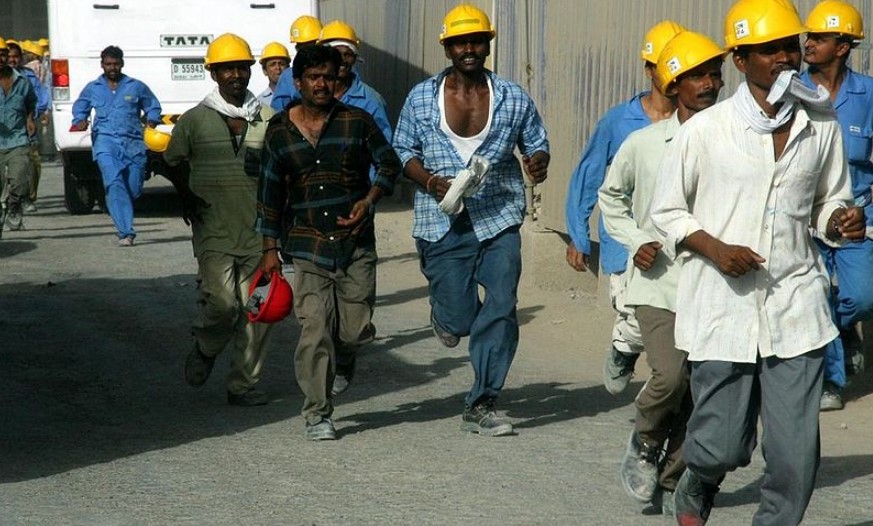 The 'Kafala' system used in Qatar and other Persian Gulf states leaves workers at the complete mercy of their contractors / Image: Imre Solt

Kafala leaves workers at the complete mercy of their contractors. Under this system workers cannot change jobs without the permission of their employers.

The 2022 FIFA World Cup is set to be “the most expensive world cup in history”. Qatar has an estimated $220 billion budget for infrastructure and other projects linked to the world cup. And yet migrant workers are at the mercy of cut-throat contractors, forced to live in squalor working in conditions that Human Rights Watch describes as a form of indentured servitude. Such are the tender mercies that the oil and gas barons of Qatar have for the workers toiling away under the blazing desert sun.

These migrant workers often pay recruitment fees in order to be able to get a contract to work abroad. “I paid 300,000 (Bangladeshi Taka)”, one worker told The Guardian. This is the equivalent of almost $2,900 – a huge sum for these workers. The charging of recruitment fees is illegal in Qatar but this does not stop the rogues who run this system.

The average wage for stadium builders is around 1,000 Qatari Riyal (approximately $275) a month. This amounts to a wage of about $1 an hour. Security guards from countries such as Pakistan, Kenya, and Nepal say that they toil through 12-hour shifts and work for 30 days a month, whilst their salary is cut if they take a day off.

“The salary is very low, it’s very difficult. I can earn this in India,”, another worker told The Guardian.

According to one Kenyan security guard, Kafala agents lie about the wages their workers will receive once they are flown into Qatar. “It’s a trap, because you are told one thing in Kenya and another in Qatar”, he said.

One group of migrant workers, employed by Al Sulaiteen Agricultural and Industrial Complex (SAIC), are driven after their shifts, for 40 minutes, to the edge of the desert. It is the hard labour of these workers that has built the Al Bayt Stadium, which is shaped like a Bedouin tent. The stadium comes complete with its own lake, circle pond, vast manicured lawns, practice fields, and even its own McDonald’s. The ducks at Al Bayt Stadium Lake have more spacious and sanitary living conditions than the migrant workers themselves, who are cramped into windowless, squalid, cabins.

Many workers will be unable to repay their debts. Some find themselves taking out loans in their attempts to repay off their original recruitment fees. The pressures of loans have even driven workers to suicide, like Mahamad Nadaf Mansur Dhuniya, a Nepali worker who was found hanging in his workplace.

On top of these horrendous conditions, it has been reported that about 6,800 workers have died in the run up to the world cup. The next World Cup in Qatar can truly be said to have been built on a mountain of corpses of migrant workers.

It is effectively illegal for workers to form trade unions, take strike action, and protest in Qatar.

Yet on 14 August, around 200 workers of Al Bandary Engineering and Electro Watt, under the Bandary International Group umbrella, took to the streets to protest outside company offices, protesting about unpaid wages. Several protesting workers were detained and there have been reports that some were even deported. The henchmen of the callous bosses reportedly turned off the air conditioning in the workers’ rooms, telling the workers that if they can protest in the heat, they can manage without their air conditioning.

#Qatari officials have detained around 60 Al Bandary Engineering and Electro Watt employees who protested unpaid wages, and began deportations last night. Close to 200 migrant workers had taken to the streets in the industrial area on 14 August 2022. https://t.co/udmgYms6dX

Migrant workers have also taken to social media apps like TikTok in order to share their stories and videos of strikes and protests.

One such TikTok video of striking security guards states, “and today they decided to unite all nationalities from every camp and called for a boycott”.

The Kafala system can be effectively fought only by the methods of class struggle. United action between workers of various nationalities is taking place. The migrant workers are losing their fear of reprisals. These strikes and protests by super-exploited migrant workers are glimpses of future social explosions which will sweep across the Persian Gulf states. In a world so closely connected by social media, it is hard to suppress information. No doubt the migrant workers in Qatar have been influenced by the social upheavals such as in Sri Lanka, Sudan and Iran. Migrant workers are often closely linked to communities in the country from which they originate. These events have an interrelated effect on the consciousness of workers of all lands.

Proletarian internationalism is the foundation on which the struggle for trade unions and migrant worker rights must be fought – in Qatar, the other Persian Gulf states, in every country from which these migrant workers originate, and the rest of the world. An international system of capitalist super-exploitation, such as Kafala, can only be fought by an international method of struggle. The ideas of Marxism provide the ideological weapons to fight these struggles to victory.