A strike by refuse workers in Brazil against job losses and state repression has ended after 15 days with an important, partial victory. We publish below a report by our Brazilian comrades of Esquerda Marxista from yesterday (available here in Portuguese), giving a balance sheet of the strike. Additionally, we publish an earlier report (Portuguese here) giving some further background on these events.

Balance of the Comcap strike

At a meeting held on 1 February, the workers of Comcap Autarquia (a public cleaning company in Florianópolis, SC) ended a strike that lasted 15 days. The strike was motivated by the fact that Mayor Gean Loureiro (DEM) sent the City Council a bill that provided for the dissolution of Comcap, reducing workers’ wages by up to 50 percent and privatising public cleaning services. The project was approved by the majority of the councillors, overriding all legal deadlines and under the strong apparatus of the Military Police and Municipal Guard. In a meeting held on the 27 January the workers decided to maintain the strike, with the participation of almost 100 percent of the members, demanding the repeal of the law. On the other hand, the mayor, the judiciary, the bourgeois politicians, the merchants and local businessmen entered into a furious public campaign demanding persecution and violent repression against the workers and their union, Sintrasem.

The Judiciary, through the judge (Judge) Júlio César Knoll, declared the strike illegal and authorised the municipality to carry out the exoneration and dismissal for cause of all civil servants and employees of the Municipality; blocking union bank accounts and charging a daily fine in the amount of 200,000 reals (about 40,000 USD); seizing the money directly from the payroll accounts and the funds in the personal bank accounts of the members of the Sintrasem board up to the amount of the fine. He also decided that the Military Police should reinforce the police force to face the strike pickets and remove them from the picket locations.

On 30 January, the mayor announced that he would not negotiate with the striking workers and would dismiss all 1,500 of them in the company, even creating a commission responsible for administrative processes. Additionally, he cut the wages for strike days.

On Sunday 31 January, Sintrasem organised a large public action that brought together more than 5,000 people, with the participation of Comcap workers, teachers, healthcare workers, social assistants, supporters from other sectors, and many people from the city and region that were supporting the struggle of these workers. The action inspired and demonstrated the strength of the strike.

Also on this day, the Esquerda Marxista initiated a national and international motion campaign against the persecution and repression of striking Comcap workers. In turn, 400 motions were sent by unions, political parties, and activists from dozens of countries and cities in Brazil, to the Mayor and the Judge. These factors combined put pressure on the municipal Executive and Legislative to open negotiations on the night of 31 January, presenting a proposal with the following points: withdrawal of administrative punishments and legal action against the union and workers; return of wages; replacement of days off in the form of unpaid overtime, until the normalisation of company services; including the withdrawal of the 200,000 reals fine per strike day, with the payment of a fine in the amount of 100,000 reals and the guarantee of stability until the last worker retires. The union leadership evaluated that the strike had reached its limit and that it should accept the proposal and end the movement. We understand that, under the circumstances, this was the right decision, as it guaranteed jobs and non-punishment for the union and workers. The rights withdrawn from workers will continue to be the banner of struggles in the next period.

The lessons of the strike 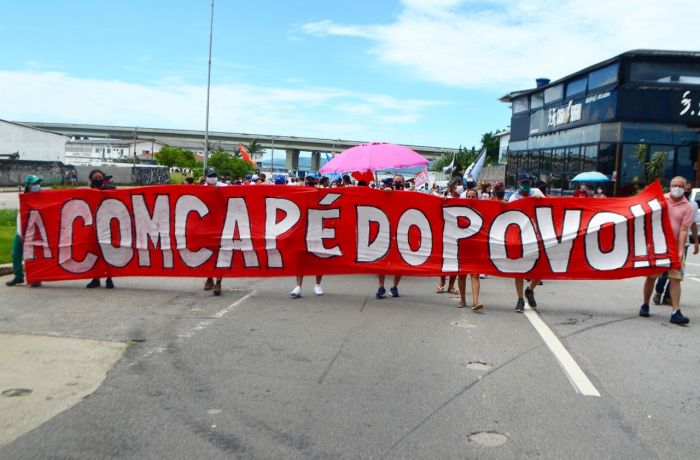 The action of striking workers has won concessions, but more remains to be done / Image: Sintrasem

In July of 2017, Comcap was transformed into an autonomous enterprise (publicly owned, but with its own management and accounts) by the mayor Gean Loureiro in his first year mandate. At that time, a solid strike of the workers forced the Mayor to maintain in the law which created the autonomous body a provision which guarantees the yearly renewal of the Collective Bargaining Agreement in the Ministry of Labour, taking into account that Comcap workers are hired under the CLT work contract, unlike most council workers. At that moment, we warned the rank and file that we should continue to fight to reverse the transformation of the company into an autonomous enterprise, since the mayor could change the law with a simple majority in the City Council, removing their rights. This is exactly what happened at the beginning of Gean Loureiro’s second term, even after he made promises on the eve of the October 2020 elections that workers would not lose rights under his government.

Throughout 2020, Gean Loureiro failed to comply with several clauses of the Collective Labor agreement. Sintrasem’s board reacted passively to these non-compliances, postponing necessary stoppages in the face of the attacks that were accumulating. All assemblies that were called to address non-compliance were closed with letters from the Comcap management saying they would comply with the agreement. But the next day, everything remained the same.

With the election of Gean Loureiro in the first round for his second term, the scenario pointed to deeper attacks on workers' rights and the concrete possibility of privatising Comcap. After the non-compliance with the replacement salary in the beginning of November, the workers pressured the union in the direction of calling a strike in the beginning of December. After a four-day strike, the mayor presented a proposal for the payment of inflation in installments, which was approved by the membership in the assembly. This strike had already demonstrated to the workers that Sintrasem's management erred in not launching a public campaign before municipal elections, explaining to the population and company workers that Gean Loureiro was attacking workers' rights and that his re-election represented an eminent risk of privatisation of Comcap, which is considered one of the best public cleaning companies in the country.

Another mistake that the union leaders made during the whole of 2020 was not calling the rest of the sector (education, health, social assistance, works, administrative, etc.) for face-to-face meetings and public acts against pay freezes and other attacks. This demobilisation of these workers prevented the leadership from calling them to unify the fight in defence of Comcap remaining 100 percent public, and for the maintenance of the rights of those workers. These hesitant attitudes by the Sintrasem leadership allowed the municipal executive to organise, together with its base of councillors, traders, businessmen and the media, the attacks on Comcap and its workers.

The lesson remains that political training in the workplace is a constant requirement, as a way of preparing the workers to understand the political situation and be ready to mobilise at any time in defence of rights and jobs.

Stop the persecution of unions 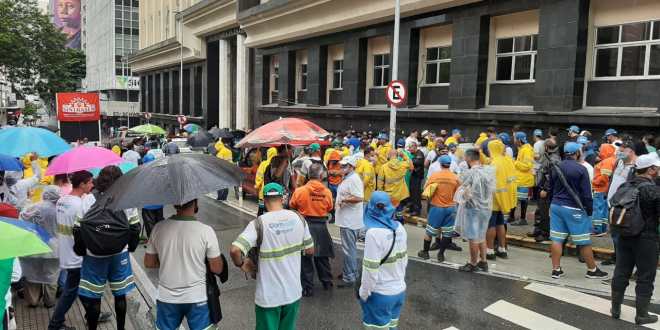 On 18 January, the workers of Comcap (public cleaning company of Florianópolis, Santa Catarina) went on strike to fight against the bill sent by Mayor Gean Loureiro (DEM) to the city council that announced the company’s closure and the privatisation of public cleaning services, in addition to reducing workers’ wages by up to 50 percent. The project was approved by the majority of the councillors, overriding all legal deadlines and under the strong apparatus of the military police and Municipal Guard.

In a meeting held on January 27, the workers decided to continue with the strike, with almost 100 percent of the membership joining in the demand to repeal the law. On the other hand, the mayor, the judiciary, the bourgeois politicians, the bosses, and local businessmen entered into a furious public campaign demanding persecution and violent repression against the workers and their union, Sintrasem.

The judiciary, through the judge Júlio César Knoll, deemed the strike illegal and authorised the Municipality to “carry out the resignation and dismissal with just cause for all of the civil servants and employees of the municipality”; blocking the bank accounts of the union and charging a daily fine of 200,000 reais (around 40,000 USD); seizing the funds directly from the payroll and the personal bank accounts of the SINTRASEM board up to the amount of the fine. He also decided that the Military Police should reinforce the local police to confront and disperse the striking workers on the picket lines.

The mayor already announced that he will not negotiate with the striking workers and will fire all 1,500 workers at the company.

Faced with this truculent and anti-union action orchestrated between the Municipal executive, municipal legislature and the judiciary, we address all workers and their union organisations, especially the workers of the Central Workers Union (CUT), and the parties that claim to represent the working class (PT, PSOL, PCdoB and others), to the parliamentarians and activists of the workers' movement, to those who defend democratic freedoms, to urgently send messages to these authorities requesting the withdrawal of lawsuits and all persecution and repression against the union, its directors and workers, demanding an end to the threats of firing strikers.

In particular, we call on the CUT/SC and its unions in the Greater Florianopolis region to support the struggle of the Comcap workers by opening the discussion about a general strike in the region to make the city hall, the judiciary, and the local bosses retreat.