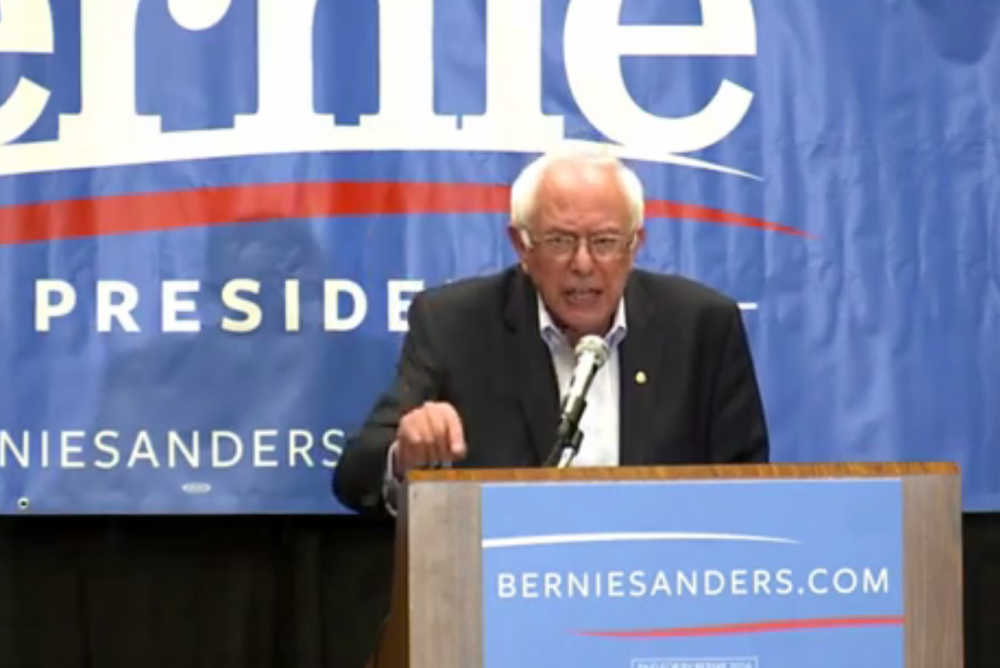 American politics has been fundamentally transformed. For decades, anyone who would have described themselves as a “socialist” would have been viewed as some sort of extra-terrestrial. Today, Bernie Sanders, a self-described “democratic socialist” draws massive crowds and is posing a threat to Hillary Clinton in the race for the Democratic Party nomination for upcoming presidential election this fall.

Faced with capitalism in crisis since the fall of Lehman Brothers in 2008, the frustration of the masses in the United States is expressing itself through the Sanders campaign. Canada is not immune to this wave of enthusiasm for what Sanders calls a “political revolution against the billionaire class”.

In the last period, austerity has been the order of the day in every country. Youth today have known nothing but austerity and there is no indication that this is about to change any time soon. The threat of a new global recession looms and this has been conceded by an increasing number of analysts. An entire generation is faced with the scenario of being sacrificed on the altar of profit.

With capitalism in the midst of its worst crisis since 1929, labour leaders cling to this system for dear life. This has most notably been the case in France, Spain and Greece where “socialist” parties have been the main flag bearers for austerity. In the United States, union leaders cling to the Democratic Party in spite of the continuing impoverishment of workers under Obama. In Quebec, the situation is similar. The unions flirt with the Parti Quebecois in spite of the fact that its leader is none other than billionaire and arch strike breaker Pierre-Karl Péladeau. The contrast between the severity of the austerity measures and the conservatism of the reformist bureaucracies of the workers’ organizations is striking. These leaders cannot see beyond what capitalism can offer us and are therefore forced to accept cuts and widespread impoverishment.

However, nature abhors a vacuum. The radicalization and frustration of the masses, faced with the constant attacks of capitalism must inevitably express itself in one way or another. In Spain and Greece, with the extreme degeneration of the traditional organizations of the working class (PSOE and PASOK), the anger of the masses expressed itself through Podemos and Syriza, new left formations. In the case of Podemos, this literally came out of nowhere. In the United Kingdom, due to an historic accident, Jeremy Corbyn, a self-described socialist was allowed to enter the Labour leadership race after thirty years of control by the right-wing of the party. Corbyn won by a huge margin and his campaign attracted tens of thousands of youth radicalized by the crisis of capitalism.

In the United States, workers who want to vote left are constantly told that they must vote for the Democratic Party as “the lesser evil”. The labour movement in the U.S. is severely held back by a conservative union bureaucracy and that they do not have a party that would allow them to express their interests independently of the capitalist class. It is in these conditions that the anger of the masses has expressed itself through the campaign of Bernie Sanders. The call of Sanders for a “political revolution against the billionaire class” and his references to “democratic socialism” have found an echo among workers and youth. It must be understood that this mass support for Sanders is in fact in spite of the Democratic Party and not because of it. The Democratic Party remains what it always has been, one of the two wings of the American bourgeoisie.

According to a recent poll, 58 per cent of Americans between the ages of 18 and 26 would choose socialism over capitalism (33 per cent prefer capitalism). References to “socialism” and “revolution” are not a handicap for Sanders. On the contrary, it is precisely this that gives him his popularity. This is exactly what was admitted by Catherine Rampell of The Washington Post who recently wrote that millennials “are not just willing to look past Sanders’s socialism — they actually like his socialism.” These statistics reflect the state of American youth, a youth radicalized and open to ideas which were previously ridiculed as far-fetched and outdated. This demonstrates the falsity of the bias so prevalent in the labour movement that we must moderate our politics in order to become popular.

The least we can say is that the Sanders campaign has transformed the political landscape of the United States. The use of the term “socialism” by Sanders makes people wonder what real socialism actually is – the word “socialism” was in fact the most searched word on the Miriam Webster website, a popular dictionary publisher. Workers, and especially the youth are seriously questioning the possibility of an alternative to capitalism. The terrain is now fertile for the spread of Marxist ideas in the land of Uncle Sam.

The Effects on Canada

It is often said that when the United States coughs, Canada gets a cold. How is Canada being affected by the wave of enthusiasm for Bernie Sanders?

Canada’s economic situation is dangerously precarious. Canada avoided the worst of the crisis of 2008-2009 but it seems like this time around Canada will be among the first to go under. The country was already hit with a technical recession in 2015 when the price of oil resulted in the free fall of the Albertan economy. In January, the Bank of Canada reduced its growth forecasts from 2 per cent to a mere 1.4 per cent and described the economic environment in Canada as “highly uncertain”. The drop in the value of the Canadian dollar has caused the price of imports to increase which particularly affects the price of food, which has been increasing drastically. The lowering of interest rates is normally used as a measure to stimulate the economy but they are already at historical lows.

Taking this into account, the political situation in Canada is however very different. While the American political establishment is in crisis as the two-party system is being threatened by outsiders like Sanders and Donald Trump, Canada enjoys relative stability. The hated reign of the Harper Conservatives came to an end after nearly ten years and a majority of Canadians polled have illusions in the Trudeau government. But the Liberals will inevitably resort back to unpopular austerity measures. Their commitment to deficit budgets will only postpone the inevitable and we know that it is the workers who will be forced to foot the bill. However, by simply reversing the most controversial decisions of the Harper government, Trudeau will enjoy a certain popularity for some time. A recent Forum Research poll found that if a federal election was held now, the Liberals would win by a large margin with 49 per cent of the popular vote. The honeymoon between Trudeau and the electorate is not over.

In Quebec, in spite of the fact that the working class has been mobilized in the Common Front of public sector unions and that austerity is highly unpopular, the Couillard Liberals are ahead with 36 per cent support. Meanwhile, Quebec Solidaire has stagnated with approximately 10 per cent. The contrast between the strength of the worker and student movements in the past few years and the lack of political representation which reflects this is striking. The workers of Quebec also need their own party and so far Quebec Solidaire has been failing to provide this. Only when we take into consideration the absence of any genuine representation for the workers on the left can we understand why the Liberal Party of Quebec is able to maintain its relative popularity.

The Sanders campaign does however have its effects on Canadian politics, most notably when we look at the situation within the New Democratic Party. The NDP was leading in the polls in the midst of the federal election last year, as they had championed several progressive reforms and had denounced the Liberals for their support of the Conservatives’ “anti-terror” legislation, Bill C-51. But the leadership of the NDP, still obsessed with the idea that you need to “moderate to win”, moved to the right. This provided Trudeau with room to manoeuvre on the left and therefore a more progressive image than Mulcair. This led to a humiliating defeat for the federal NDP.

With the rise of left-wing leaders such as Sanders and Corbyn, more and more voices of dissent are being raised against Mulcair and his provincial counterparts. For instance, Cheri DiNovo, an Ontario NDP MPP has said that the rise of Sanders and Corbyn show the need for the NDP to return to its “democratic socialist” roots. In addition, the Nova Scotia NDP just elected a new leader, Gary Burrill on February 27th. Burrill describes himself as a socialist and ran on a platform mirroring that of Bernie Sanders: a $15/hour minimum wage, free education and affordable housing. He even referenced the Sanders campaign through social media, by utilizing the hashtag #FeeltheBurrill, an open reference to the popular hashtag #FeeltheBern of the Sanders campaign.

Thomas Mulcair has obviously felt the increasing pressure and for completely careerist reasons is trying to move to the left in order to save his skin. In fact, he recently claimed that he was a “social democrat” who would fight inequality, a discourse which contrasts with his obsession of balanced budgets during the recent federal election campaign. It will be interesting to see whether or not he will be able to retain the leadership of the party during the convention in April, in which a leadership review will be held.

Political instability is the new norm

As the crisis of capitalism deepens, political instability will become the norm as the masses search for a way out. In North America and the rest of the world, the political pendulum will swing to the left and to the right as millions of normally apathetic people enter the political arena. We will see the rise and fall of many different political leaders promising to change or to reform this or that aspect of capitalism, reflecting ordinary working class people's desire to escape the horrors of the system.

As Marxists we understand that the promises of someone like Bernie Sanders, or any prospective Canadian mirror-image, can only be accomplished through breaking with the capitalist system, expropriating the big parasitic banks and multinationals and instituting a democratically planned economy – a socialist economy.

Nonetheless, it is crucial to build the forces of Marxism in Canada so that when the radicalization occurs, we will be ready to help give workers and youth the ideas and methods that can win. On the basis of capitalism, and reformism there is no solution to the crisis. What we need is a revolution.