Details
In Defence of Marxism
23 October 2008

Spain
Share
Tweet
Thousands of students took to the streets in Spain on Wednesday 22nd to protest against plans to privatise university education and also opposing any plans to make workers pay for the capitalist crisis through cuts in education, health and other public services. 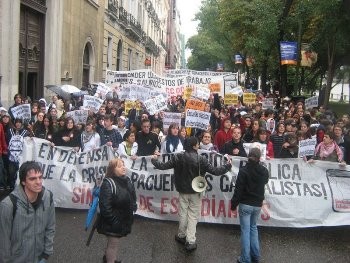 Thousands of students took to the streets in Spain on Wednesday 22nd to protest against plans to privatise university education and also opposing any plans to make workers pay for the capitalist crisis through cuts in education, health and other public services.

The strike was called by the Marxist-led Sindicato de Estudiantes (Spanish Student Union) and 96% of high school and secondary students and 70% of university students responded to the call throughout the country, according to the SE. The turn out on the demonstrations was good considering the absolutely pouring rain in most of the country.

In Madrid, some 10,000 students participated in a spirited demonstration demanding that the bankers and the rich pay for the capitalist crisis. In Barcelona there were 5,000 students, 2,500 in Valencia, 2,500 in Granada, 2,000 in Santiago de Compostela, 1,500 in Malaga and Vigo, 1,200 in Bilbao, and overall in up to 40 different towns and cities demonstrations took place. 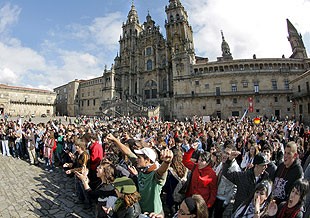 The immediate spark for this movement was the Spanish Socialist Party government’s attempt to introduce the “Bologna Plan” of the European Union into Spanish Universities. This would mean further elitisation of higher education, which in the case of Spain would be accompanied by the replacement of student grants (which very few students get anyway) with student loans. One of the main slogans of the demonstrators was “el hijo del obrero a la Universidad” (working class students to university).

But the movement was also a response to the crisis of capitalism which has hit Spain harder than most countries, it being one of the countries where the housing bubble was one of the biggest. The financial crisis has already affected the productive sector. Thousands of jobs are being threatened. Nissan alone has announced 1650 lay offs in its plants in Barcelona, where the workers have started a campaign of mobilisations to defend jobs.

The Socialist Party government has already announced an austerity budget for next year and it is clear that there will be sizeable cuts in social spending. While the leadership of the main trade unions, UGT and CCOO, have already made statements to the effect that “we should all work together to overcome this crisis”, the Spanish Student Union has made a public appeal for the trade unions to prepare a general strike to defend jobs and public services and make the capitalists, not the workers, pay for the crisis of their own system. 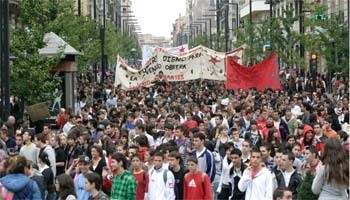 The crisis of capitalism was ever present in the minds of the students taking part in the demonstration, as can be seen by slogans like: “the problem is capitalism”, “if there is no solution, there will be revolution”. The Student Union made a conscious effort to link the movement of the students with that of the workers. Trade union representatives and shop stewards addressed the different demonstrations. In Madrid for instance, trade unionists from the health service, the water supply company and the University workers addressed the demonstrators, and in Barcelona this was the case with two of the teachers’ unions which publicly supported the students’ strike (Ustec and CGT) and the Bus Drivers’ Strike Committee.

The mood in the workers’ movement is certainly receptive. In Galicia, the CIG trade union has announced a campaign "for the nationalisation of the banks", with mass meetings in workplaces, culminating in a day of action with demonstrations in the main cities on November 13, the same day the SE has called for a further students' strike. The leaflet they have produced, under the title "For a new socio economic model - Capital should pay the price of the crisis", argues clearly that, "We cannot put millions of euros from the public coffers in the hands of those who are responsible for the current crisis, so that they can continue to speculate on the financial markets and increase their already massive wealth. The whole of the financial sector should be nationalised."

Now the Student Union is preparing a new day of student strikes for November 13th. As the SE general secretary Juanjo Lopez said at the end of the demo in Madrid: “this is a refutation of all the lies about youth which is passive and not interested in politics”.