Spain
Share
Tweet
Over 600 workers, women and youth attended an historical event organised by the Students’ Union in Puerto Real against the closure of Delphi and for its nationalisation under workers’ control. 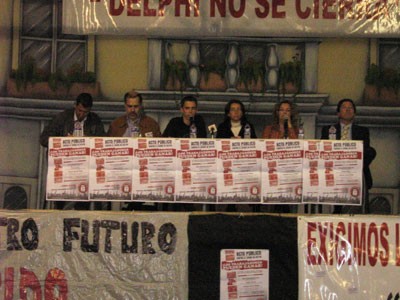 Over 600 workers, women and youth attended an historical event organised by the Students' Union in Puerto Real against the closure of Delphi and for its nationalisation under workers' control.

Last Friday, April 20, a meeting took place that will be engraved in the memory of the working class of Cádiz and Puerto Real for a long time. Organised by the Students' Union, it brought together 600 workers and youth enthused by the successful and impressive general strike of the previous day. 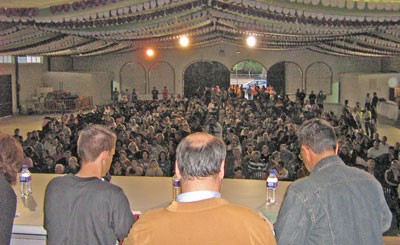 From the platform, various speakers intervened such as the representatives of the Students' Union in Cádiz and the Women's Support Committee, comrade Xaquín García (who pushed forward the Union Manifesto in solidarity with the workers of Delphi and who is also a member of the editorial board of El Militante, the paper of the Spanish Marxists) and José Antonio Barroso (mayor of Puerto Real)

During the interventions, it was made clear that the youth are committed to supporting this struggle through to the end; and that the workers of Delphi have found solidarity in the labour movement within Spain and internationally, as demonstrated by the greetings received throughout the meeting from different parts of Spain and around the world, including one from Marcelino Camacho, a legendary figure in Spanish trade unionism.

In these messages from workers and trade unionists from around the world as well as in the interventions by the representative from the Students' Union and, above all, Xaquín García, the demand for nationalisation and workers' control were strongly raised. 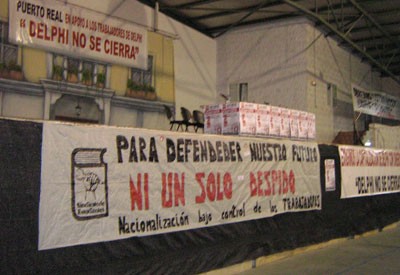 Xaquín's intervention, interrupted several times by enthusiastic ovations from the workers, stressed the viability of the nationalisation as well as the fact that the workers, the youth and women have the necessary strength to obtain it.

The sympathy of the working class in Cádiz for the ideas of Marxism was made clear.

José Antonio Barroso, mayor of the city where the factory is located, spoke about the necessity of public intervention and called on the Junta de Andalucía (Assembly of Andalusia) to take drastic measures, which also received applause.

The optimism and combative mood of the workers, women and youth expressed at Friday's meeting and during the past mobilisations as well as on Thursday's general strike are proof and evidence that victory, now more than ever, is possible.