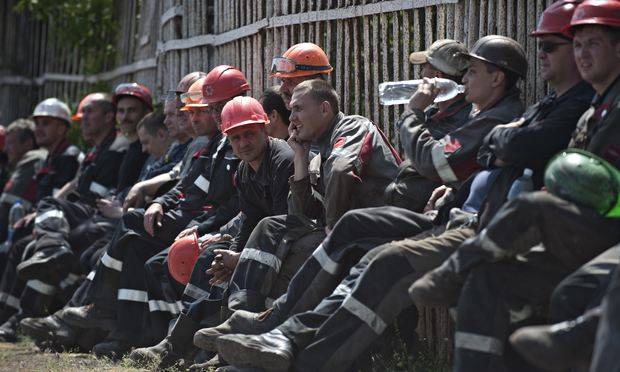 As the 2014-2015 winter set in, ordinary Ukrainians began to wonder how to heat themselves. The Ukrainian economy had taken a shelling as the value of the currency dropped heavily since the beginning of the political crisis after Euromaidan. At the same time, as a result of  the cutting of state subsidies as well as tensions with Russia at a boiling point, gas prices had risen more than double during 2014. With most Ukrainians already living paycheck to paycheck, and their real wages decreasing by 34% over the same period, a serious catastrophe stood in front of them.

Luckily for Ukrainians – and the ruling oligarchy – the 2014-2015 winter was one of the mildest in many years in Europe. The prospect of having people freezing in their homes, unable to pay for heating, was largely evaded. As the next winter is likely to present an economy in an even worse state, gas prices up another 453%, as well as winter conditions likely to return towards the mean for the region, catastrophe looms again as we approach December.

Trading with the enemy

Despite populists like Prime Minister Arseniy Yatsenyuk and former PM Yulia Tymoshenko at various times claiming that Ukraine would be able to achieve gas independence with domestic sources (Tymoshenko suggesting that foreign companies should be allowed to exploit these sources tax-free), there has been no evidence that Ukraine contains anywhere near this kind of production potential. Most of the gas consumed in Eastern Europe comes from Russia, and while Yatsenyuk has suggested that Ukrainian citizens start paying “European prices” for gas, it is clear to everyone that Russian gas is the only viable alternative barring heavy subsidies. But the government can no longer afford these subsidies if it is to comply with the IMF demand of eliminating the yearly deficit run by the state energy company Naftogaz.

The Russian government has used its supply of gas to put political pressure on the country before, including during the term of their supposed “puppet” Yanukovich”. Despite Ukrainian exports to Russia falling by $5.7 billion, 100% of Ukrainian gas in 2014 essentially came from Gazprom, with 75% directly from Russia and 25% rerouted via neighbouring countries like Slovakia, Poland and Hungary.

However, rather than as Yatsenyuk alludes that, “the Yanukovich government held on to reliance on Russian gas to appease Putin”, it is the oligarchy’s parasitic control of the Ukrainian economy since independence that has ensured Ukrainian infrastructure to not modernized towards any alternative energy sources from those around since the 80’s. At the same time, Ukrainians – who are the 2nd poorest citizens in GDP per capita in continental Europe – really can not afford any alternatives. Not helping either, is the speculation on and privatization of Ukrainian gas interests (especially by the likes of Tymoshenko), that has netted the oligarchs billions of dollars from the pockets of the Ukrainian working class, who are the end consumer.

It is again the workers who suffer from the deteriorating relations with Russia. While Poroshenko parades in front of the UN condemning Russian aggression, a central factory in his Roshen confectionary empire operated across the border in Lipetsk until being seized by the Russian government last June. While the government block trains to and from Crimea – cutting off affordable transport for Ukrainians with relations there – buses with special licences operated by businessmen with ties to the government can be taken from the major cities at a considerably less affordable price (this description also applies to the blocking of Russian airliners). While those who rule in Kiev try, again and again, to blame every aspect of this crisis on Putin, they remain the most to blame in this fiasco by any objective standards.

True nature of regime clearer in the deeds

As in the question of gas, the government has done little in the way of alleviating the effects of this crisis for the Ukrainian masses. Poroshenko’s claims on the UN stage of “reducing threefold the poverty rates” were blatant lies and laughable to even those who voted for him. The Ukrainian government is currently implementing changes to the labour code in the name of improving the competitively of the Ukrainian market, meaning of course changes that make it easier to fire workers while paying them less. Although these changes would benefit foreign companies entering Ukraine, they are most useful to the domestic owners looking to further their profit margins, including Poroshenko, who has increased his personal wealth by 20% over the last year despite the dive in Ukrainian currency.

A law for the legalization of prostitution is also being proposed by Poroshenko’s party in the name of “opening up Ukraine to the West”. Far from addressing the problems facing sex-workers today, the proposal seeks to decriminalize the actions of the brothel owners against their workers who are cynically referred to as commodities.

In a show of “tackling corruption”, a high profile oligarch Gennady Korban, rival electoral candidate from Ihor Kolomoiskiy’s party “Ukrop”, was arrested for “being part of organized crime” and “mafia business practices”. As with the Tymoshenko trial, it is likely that Korban is in fact guilty of  involvement with organized crime, but very similar things can be said about the majority of the Ukrainian parliament and how they acquired their wealth. Kolomoyskiy-Korban are rival business interests to Poroshenko, but they are also some of the largest financiers of far-right groupings in Ukraine.

A far-right deputy Ihor Mosiychuk (member of Oleh Lyashko’s Radical Party) has been arrested on corruption charges. This is culminating in a general crack down on the far-right forces not loyal to the president, culminating in armed demonstrations by the far-right against the government. At one of these demonstrations on August 31st against a proposed peace plan with the Donbass rebels, a Svoboda Party member threw a hand grenade at parliament, resulting in the death of a guardsman. A number of Svoboda leaders are now facing trials. Interestingly, at one of these trials their role in using live ammunition to fire on protesters during the Euromaidan protests was revealed. The infamous Dmitry Yarosh resigned as the leader of Right Sector, with speculation that it was due to government pressure after the attacks on businessmen and armed demonstrations by the group.

The regime is not a fascist one as it is sometimes characterized. It certainly uses fascist elements in its security apparatus, as well as right-nationalist and anti-communist propaganda, but the basis of the regime remains the Ukrainian oligarchy, that is, the Ukrainian bourgeoisie. Although the far-right have acquired an alarming amount of arms and new recruits since the crisis began, they remain tied to the state and the oligarchy for money and arms. Nevertheless, the continued collapse of Ukrainian society is leading to a continued increase in lumpenized youth with futures much bleaker than their parents. Tragically, in the current situation – with a lack of any alternative – it is these youths that serve as the basis for fascist groupings, which could lead to their further growth despite government crackdowns.

The regime in Kiev remains a mixed animal. It has some of the formal elements of bourgeois democracy but in actuality it acts like a Bonapartist dictatorship in many instances. Since the beginning of Poroshenko’s term, democratic rights are becoming weaker and weaker with the arrest of journalists, left activists and a repression on any opposition to the government in general. Ironically, in this sense they are becoming similar to their “enemies” in the Kremlin.

Ukraine moving further towards being a client state for US interests is also a possibility. In an interview, Poroshenko Bloc MP Sergey Leschenko claimed that the influence of the US embassy has never been more important, with appointments and dismissals regularly being put up for approval from the embassy’s directive.

The need for an anti-oligarch spring

Poroshenko will use any means to further consolidate his power, as his resume demonstrates. He cannot stay in power with force alone, and so will have to make deals with rival oligarchs, while making some concessions – if only cosmetic – to the population, such as visa-free travel to the EU. This will be complicated by Ukraine’s hurting economy (projected to shrink by another 11% in 2015), spiralling debt, combined with the demands of the creditors for Kiev to further implement cuts on the Ukrainian working class. Over half of Ukraine’s capital now comes from the IMF.

Poroshenko came into the presidency in 2014 with a 55% election victory and a mandate to stop the war along with the social decline. Performing the opposite on both promises has made his popularity nosedive, with 59% of Ukrainians negatively assessing Poroshenko’s work in a recent poll (Kyiv International Institute of Sociology). The assessment is even worse for the PM Yatsenyuk, who was perceived negatively by 71%, and there are reasons to believe that he will be the sacrificial lamb at the end of the year when it will be legal to replace him.

A demonstration of their popularity was seen last week, in the second round of municipal elections. Although Poroshenko’s candidate in Kyiv Vitali Klitschko – in a runoff against Right Sector’s Borislav Bereza – won 65% of the vote, the voter turnout was a historically low 30% for the elections in the nation’s capital. Additionally, the elections in Kharkiv and Odessa both saw landslide victories by former Yanukovich allies.

The problems posed by the coming winter will not make retaining hold any easier. The Ukrainian workers will find warmth neither in nationalist propaganda nor the reactionary reforms labelled as “European modernisation”. At the end of the day, the only way to turn the heat back on will literally be in the recovery of the means of production stolen by the oligarchs.