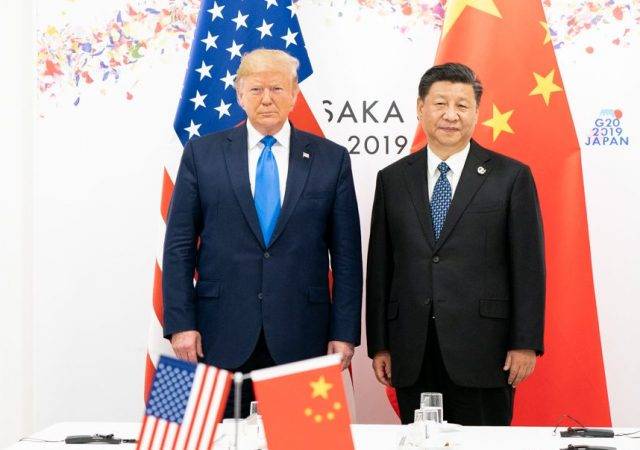 In August, the expected yield for ten-year Treasury notes fell below the yield for two-year notes for the first time since 2007, with the 30-year bond yield also reaching a new low. The “yield curve” tracks the yield to investors who purchase shares in government debt to be paid back over various time horizons. The national debt accrues as the US Treasury sells Treasury securities in exchange for cash used to finance the government.

These securities encounter the forces of supply and demand, and the lower long-term yields indicate that investors are moving their money into lower-risk long-term Treasury notes rather than gamble on the stock market, where they anticipate significant longer-term disruptions in the economy—in other words, they anticipate a recession. Yield curve inversion has been a predictor of every significant recession since 1950, indicating that a new downturn is likely in the next few years.

The economic costs of Trump’s trade war with China mean that two of Trump’s political priorities—delaying a new recession and winning his trade war—are at odds with each other, and he’s looking to the US Federal Reserve (“the Fed”) to square the circle for him. Trump has escalated criticisms of Fed Chair Jerome Powell after Powell argued in August that the Federal Reserve would not be able to fully mitigate the economic harm of Trump’s trade war. Financial markets now expect that the Fed will cave to this pressure and continue marching interest rates back down over the next couple years, moving back toward the post–2008 regime of low interest rates.

Yield curve inversion has been a predictor of every significant recession since 1950, indicating that a new downturn is likely in the next few years / Image: Federal Reserve

The Federal Reserve—the central banking system in the US—has a “dual mandate” to manage inflation and unemployment by targeting interest rates. The idea is that when inflation ticks upward—often in periods of economic growth—the Fed may raise interest rates to rein in the supply of money, thus tamping down on inflationary pressures. When employment and economic growth are unacceptably low, the Fed would typically lower interest rates to encourage industrial capitalists to borrow “cheap money” to fuel investment in more production and hiring. The new expansion then leads to a revival of inflation, and the monetary cycle continues—in theory. This system is intended to weave together the financial and industrial capitalists with the machinery of the US state and stabilise the ruling class during the cyclical ups and downs that are baked into capitalism.

The period since the 2008 economic collapse has seen sustained tensions between the Federal Reserve and Congress as the traditional system of economic management has collapsed under political and economic pressures. Austerity measures enacted by Congress during the Obama administration put more pressure on the central bank to manage things on their own, leading to a historically long regime of low interest rates. Former Fed Chair Ben Bernanke repeatedly scolded Congress during his tenure for prioritising austerity measures to reduce the deficit, leaving the Federal Reserve to prop up growth with permanently low rates.

In monetary terms, 2008 marked the beginning of an unprecedented period of near-zero interest rates. However, this did more to inflate asset prices, including the stock market, than to promote real investment and GDP growth. The Fed eventually began gradually raising interest rates in small increments in late 2015. Now that trend has been reversed, with new rate cuts in July 2019 and again in September in response to Trump’s trade war and continued low inflation. Tensions have emerged over whether the cuts will continue downward.

The Federal Reserve is derelict in its duties if it doesn’t lower the Rate and even, ideally, stimulate. Take a look around the World at our competitors. Germany and others are actually GETTING PAID to borrow money. Fed was way too fast to raise, and way too slow to cut!

Trump and a large segment of the capitalists want these rates pushed down to zero, or even below zero—which would mean that banks would have to pay money to stash money with the Fed. This would follow the example of the European Central Bank, which has lowered rates into negative territory. Trump has also linked this proposal with opportunities to refinance the national debt, which could help reduce the debt burden of Trump’s tax cuts. Above all, he is desperate to hold off the recession until after the 2020 elections. But some elements within the Fed would prefer to leave room for more cuts later when a downturn does occur.

Lower rates could also devalue the dollar, potentially increasing exports by making US goods more competitive on world markets. China has supported its exports in this way, and this summer, the value of China’s currency dipped below a longstanding threshold in a likely response to Trump’s tariffs on Chinese goods.

The social costs of the next recession will be borne first by the working class. There’s no monetary policy that will magically benefit workers and no optimal level of sustained economic growth under capitalism that will reverse the exploitation of workers that drives that growth. “New” economic ideas such as Modern Monetary Theory do not meaningfully break from the Keynesian economic logic of the postwar boom—conditions that have long expired. The way out of the crisis lies in overthrowing private ownership of the key levers of the economy, not in manipulating the bourgeois central banks.

The dual mandate of capitalist central banks results from the continued dominance of an anarchic capitalist system that presupposes periodic meltdowns, where workers bear the misery and capitalists take the opportunity to hoard new assets at low prices. But there is no such thing as a “final crisis” of capitalism that automatically tips itself over into new socialist relations. Such a transition will require the conscious revolutionary action of the working class.