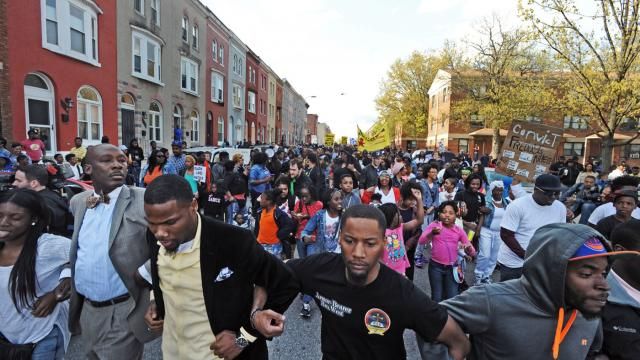 The death of Freddie Gray in Baltimore, Maryland is just the latest in a string of police killings of black men to hit national headlines. But it seems that it may mark the end of a national ebb in the #BlackLivesMatter movement. As things heat up in the coming months, an important question must be asked: what is the way forward for the movement?

On April 12, Freddie Gray, 25, was pursued, tackled, arrested, and put into a police van after allegedly fleeing “unprovoked upon noticing police presence” according to court documents. Official police reports say he was arrested without force, and eyewitnesses on the scene corroborate them.

Video was captured of him being put into the police van and of one of the stops the van made. In the first two videos (here and here) of his arrest, Freddie Gray is seen breathing, albeit in agonizing pain and unable to walk, presumably from being tackled to the ground.

It has been admitted by the police that at this point Freddie Gray had requested medical attention, specifically his asthma inhaler. The second video, recording events just minutes later, shows an unresponsive Freddie Gray at the stop where he was reportedly put into leg restraints.

By the time Gray arrived at the hospital thirty minutes later, his spinal cord was 80% severed, 3 vertebrae were fractured, and his voice box crushed—injuries that doctors have said are usually only sustained by those in high-speed automobile accidents.

It has been determined by the Baltimore Police Department that the only wrongdoing of the officers—who have been suspended with pay—was not getting Freddie Gray timely medical attention and not buckling him up in the police van, which is official procedure.

There is no way to know for sure what took place in the back of that van when the cameras weren’t rolling. But, from the point of view of the ruling class, there is little room for contradicting the official version of events as offered by the police. To question the infallibility of any branch of the state would be a very dangerous precedent to set, one they cannot afford under today’s conditions. One needs only to look back at the denials of torture and abuse at Abu Ghraib—before the gruesome photographs were made public—to see the current attitude of the state. It will likely remain a mystery as to how a young man of 25 could sustain such injuries in that short ride to the hospital—injuries that would put him into a coma and kill him a week later.

In the days following Gray’s death on the nineteenth, angry protests erupted throughout Baltimore. On Saturday, April 25, thousands of protesters marched through the city holding signs reading, “Justice for Freddie,” “Black Lives Matter,” and dozens of other slogans, many referring to others who died at the hands of police across the country and in the Baltimore area in the recent period.

Baltimore unrest continues into the night

"It better not happen to another one of my brothers...If you don't stand for nothin', you'll fall for anything." Unrest in #Baltimore continues into the night around the death of #FreddieGray. Here's a quick look at some of what our producers saw today, captured on mobile phones. Full coverage can be seen on Twitter: https://twitter.com/ajplus

Gray’s death came just weeks after a string of police killings throughout the country made national headlines. On March 1 in Los Angeles, a homeless man, Charly Leundeu Keunang, 43, was shot several times in the back while being restrained and tasered facedown by several officers. The killing, committed in broad daylight and caught on camera, drew an angry crowd of witnesses gathering around the police on the scene, denouncing them.

Just five days later, on March 6, 19-year-old Tony Robinson was killed by police in Madison, Wisconsin, igniting protests amid the attacks on the state’s labor unions and other cuts to the state budget.

On April 4, in North Charleston, South Carolina another horrific police murder was caught on camera. What seemingly started as a routine traffic stop resulted in Walter Scott, 50, being tasered and shot at 8 times while running away from a police officer.

But the anger in Baltimore isn’t merely at what has made national news. In Maryland alone, the ACLU has reported that there have been over 109 people killed in police encounters from 2010 to 2014. 40% of those killed by police were unarmed and 70% were black, while fewer than 2% of these deaths resulted in criminal charges against police officers. The ACLU compiled the report because the State of Maryland has no official records of those killed by police.

It is no wonder there is so much rage and anger being expressed in Baltimore. Echoing their cynical coverage of Occupy protests in 2011 and previous #BlackLivesMatter protests last Fall, the media was quick to latch onto the isolated scenes of protesters clashing with police and breaking windows on police cars towards the end of the largely peaceful protest on April 25.

On the evening of Monday, April 27, after Freddie Gray’s funeral, news broke of crowds of hundreds of angry young protesters smashing up a lone police car, looting a CVS Pharmacy while two police vehicles burned, and throwing rocks in a standoff against riot police. It was later revealed by eyewitnesses that police had arrived, in full riot gear, before the nearby Fredrick Douglass Highschool had let students out for the day. The police provoked a clash by turning school buses away, closing the nearby subway stop, and stopping other buses to force riders out. Amid these scenes of chaos, Baltimore Police Captain Eric Kowalczyk reassured the public by stating that, “We have officers deployed throughout the city, to make sure that we can continue to deliver services to the citizens of Baltimore.” Meanwhile, some of the police were recorded (here and here) adding fuel to the fire, as they threw rocks at the protesters.

Much of the media was fixated on scenes of fights between protesters and a number of baseball fans near the Camden Yards baseball field. What is missing from most of the captions is that it was racist drunk bar patrons who instigated the fighting by throwing beer glasses and shouting racist epithets at the protesters.

The excessive response of the police, as reported by members of the press, at Saturday’s protest was also notable. A photographer for City Paper (a local Baltimore newspaper), J.M. Giordano was videotaped being tackled and beaten by police before being dragged to safety by protesters. Another photographer for Reuters, who was shooting the incident, was detained and cited for “failure to obey orders.”

The response of the police in the recent protests reflects a mood of fear and panic. This feeling that their grip on control is extremely fragile must certainly be felt in the upper echelons of power in the US as well. On Monday evening, newly elected Maryland Governor Larry Hogan declared a state of emergency and mobilized the National Guard. A day later, New Jersey Governor Chris Christie agreed to send 150 State Troopers to Baltimore.

Photos and reports emerged over the weekend that rival gangs, the Bloods and Crips, have united to protest the Baltimore police. Baltimore police claimed the following day that they had credible evidence that the Bloods, Crips, and Black Guerrilla Family gangs are joining forces to target police officers, which was later denied in an interview with a number of Bloods and Crips members.

If such a successful or attempted assassination of police officers took place it would be counterproductive in the fight against police brutality and racism. Such an attack would be spun by the state and media to be used against the protesters in the same way that the killings of two NYPD officers in December were used in an attempt to steer public opinion into the arms of the state.

While it is easy to understand the anger and rage that many feel towards the police force, the way forward is through mass action, and not individual terrorist acts, in the fight against racism and police brutality. There are already solidarity protests planned in cities throughout the country, and we see the potential convergence of the #BlackLivesMatter movement and the Fight for $15 movement of low-wage workers in the next period. 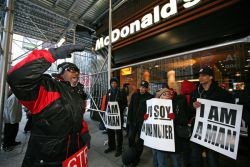 This coming May Day, in major US cities, combined rallies of #BlackLivesMatter and Fight for $15, along with trade unionists and immigrant workers, are planned. This is a significant and positive instinct of the forces involved. After all, there is a lot of overlap, as many of the retail and fast food workers fighting for higher wages are also subjected to routine harassment by the police.

Additionally, in a bold example of the potential power of the organized working class, the International Longshore Workers Union, Local 10, called for a work stoppage on May Day to protest police brutality. ILWU, especially Local 10, has long been on the left of the labor movement. In 2008, they called a similar work stoppage to protest the wars in Iraq and Afghanistan. However, most leaders of the labor movement haven’t been so keen to link arms with the #BlackLivesMatter movement.

Martin Luther King, Jr. once said that “a riot is the language of the unheard,” and it is evident that our current political system offers only empty rhetoric at best. It should be no surprise that some of the protest at injustices in our society are expressed in the form of rioting and looting, when all other protests have gone unheard.

If a bold lead were given by the labor movement to directly link and unite the struggles for higher wages, benefits, union rights, against police brutality, and against racism, the stage could be set for the formation of a new political party, using the immense resources of the labor movement to run candidates across the country and mobilize millions of workers and youth.

But the struggle wouldn’t end there. A political party of the labor movement, while undoubtedly representing a political earthquake in the US and internationally, would be doomed to manage the crisis of capitalism unless it took on a program to fight for the socialist transformation of society by nationalizing the major industries and placing them under democratic, workers control. Only by eradicating the capitalist system, and the artificial scarcity and inhuman conditions it creates, can we begin to fundamentally address racism in our society. 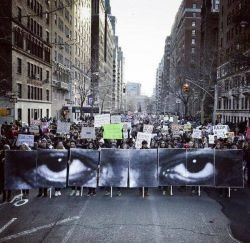 But in order to effectively fight the capitalist system, what is required is the patient work of preparing the forces of Marxism in advance of the revolutionary events of the future. Many people have the sense that “something big” is coming, and they are correct in sensing this. As has been evidenced in the recent period, in today’s conditions it merely takes one accidental event to trigger a mass movement. It is not “if,” but “when” a major explosion occurs in the United States that draws the broader layers of the working class into struggle.

But the question of whether or not that revolutionary energy can be channeled into a successful victory or not is up to the work Marxists do today. And it is with this perspective that we appeal to all of our readers to consider joining the International Marxist Tendency in the fight against racism, police brutality, and capitalism.