The dramatic "standoff" between US President Donald Trump and the Democrats over border policy is a cynical charade between two parties that represent one and the same class. Shortly after the Democrats took back the House of Representatives in the midterms, Nancy Pelosi issued a defiant pledge, promising not to give Trump “one dollar” for his wall.

A month later, following the 35-day government shutdown, the Democrats reconsidered and came back with an offer of $1.375 billion for 55 miles of “fencing.” In addition to an expanded appropriation for the Department of Homeland Security budget, including a $1.7 billion increase for 1,200 more border officers and technology at ports of entry, this brings the Customs and Border Protection budget to a record $14.9 billion, on top of $7.6 billion for ICE.

Although the nearly $1.4 billion fell short of the $5.7 billion Trump had been demanding for the wall, the president signed the deal, 48 hours before a second government shutdown would have been triggered. The New York Times immediately voiced the liberals’ satisfaction at having forced a compromise, jeering that the president’s signature campaign promise had itself “run into a wall.”

However, Trump immediately introduced another twist by declaring a “national emergency” to build a wall. This would allow $3.6 billion to be diverted from military construction projects, $2.5 billion from “counternarcotics programs,” and $600 million from the Treasury Department, totaling some $8 billion when combined with the money authorised by Congress.

The decision to take executive action has divided Republicans and sent the Democrats into a frenzy of preparations for legal and legislative maneuvers. Within days of Trump’s declaration, a coalition of 16 states led by California’s Attorney General had filed a complaint, and a wave of other lawsuits are in motion. Although the 1976 National Emergency Act leaves it up to the president to determine just what constitutes a “national emergency,” much of the litigation against Trump’s move focuses on the fact that he used this declaration to bypass Congress, after having his initial funding request denied, which no president has done before. 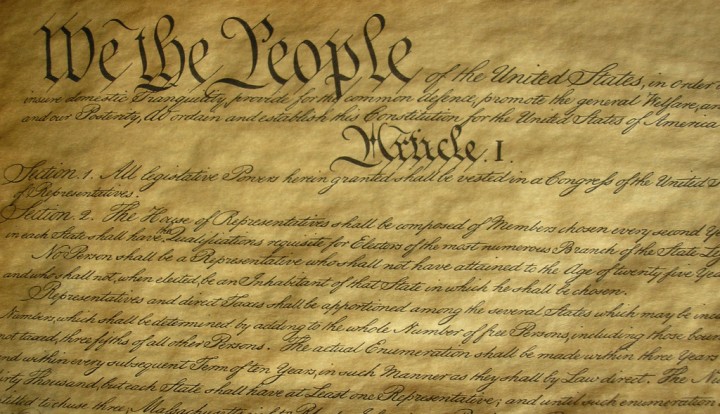 It is not so much the “constitutionality” of the emergency declaration that worries the political establishment, but rather the fact that it is showing the true face of US “democracy.” / Image: Jonathan Thorne on Flickr (CC BY-NC 2.0)

In reality, it is not so much the “constitutionality” of the emergency declaration that worries the rest of the political establishment, but rather, the fact that it threatens to pull down the curtain of so-called “separation of powers” and the hallowed “checks and balances” that are used to give the state a veneer of impartiality and democracy. If executive action is sufficient to pass emergency measures without going through the hoops of securing congressional approval, this undermines the classic excuse justifying inaction on other reforms such as universal healthcare—which, in any case, is a much more plausible “national emergency.”

David Waller, legal advisor to Republicans for the Rule of Law, wrote before Trump’s declaration:

There is no emergency; and the President’s renewed threat to declare one should cause us all—regardless of political persuasion—to think long and hard about the precedent such a declaration could create, should it somehow survive certain legal challenge. Could the military be directed to construct low-income housing because a future president declares economic inequality to be an “emergency?” Could the Army Corps of Engineers be directed to build solar farms because climate change is declared an “emergency?” The “what ifs” are countless and troubling.

Washington Republican Congresswoman Cathy McMorris Rodgers echoed the sentiment: “If elected president, how would Elizabeth Warren or Bernie Sanders use this precedent for a national disaster declaration to force the Green New Deal on the American people?”

Utah Congressman Chris Stewart, who recently launched a congressional “anti-socialism caucus” in order to warn “lawmakers and the public about the dangers of socialism,” also disagreed with the emergency declaration: “Whether the president has the authority or not, it sets a dangerous precedent and places America on a path that we will regret.”

The US is more polarised than any other time in living memory—perhaps more than any time since the Civil War. At the root of this polarisation is the crisis of the capitalist system and the dead end it represents for the millions who have seen their living standards fall and their future prospects dissipate. The general sense that society is in decline is widespread. This is reflected in contradictory and distorted ways, in large part as a result of a two-capitalist-party system that denies the working class a political outlet.

Given this vacuum, there is a clear logic to Trump’s actions. By stoking the reactionary anti-immigrant sentiment among his base, along with escalating his calls for a crusade against the growing influence of socialism, the Trump wing of the ruling class seeks to entrench a backward worldview in the hopes of preventing millions of workers and poor people from coming together against capitalism. 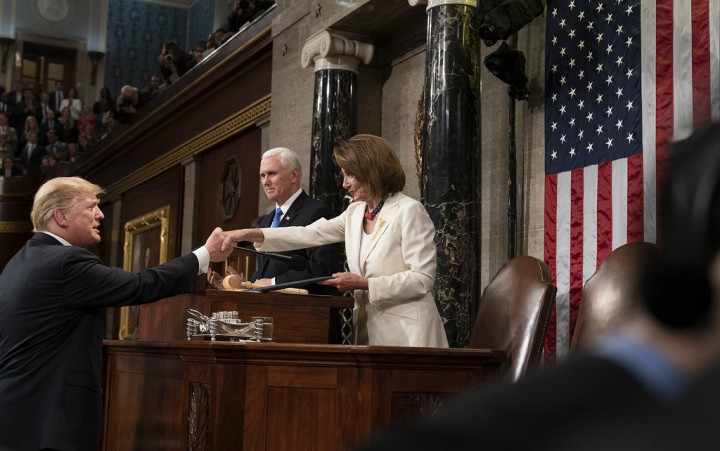 The Trump wing of the ruling class seeks to entrench a backward worldview in the hopes of preventing millions of workers from coming together against capitalism—which the Democrats happily reinforce by counterposing a “more humane” variant of the same message. / Image: The White House on Flickr (Public Domain)

Rather than cutting across this view, the Democrats happily reinforce it by counterposing a “more humane” variant of the same message: immigration controls must be enforced, but the borders should be patrolled with less brutality. Even a few self-described socialists who have been elected as Democrats play into this prejudice by restricting the demand to “Abolish ICE” into the harmless channel of swapping one method or agency of enforcement with another, while insisting that “border security” remain intact.

From the federal shutdown over the budget to Trump’s national emergency and the wave of legal challenges underway to stop the president’s “power grab”—each turn of the plot is covered by mainstream media as a new twist in an ongoing power struggle between Trump and “the resistance.” What will Trump do next? How will Democrats and Congress respond?

From the perspective of the working class, this drama is a hollow, cynical charade. Both parties in the “standoff” are in favor of the same policy of militarising of the border and terrorising undocumented workers. Whether it’s a wall or a “fence,” or merely an expanded army of border agents, the border policy is a bipartisan effort, refined and fortified in alternate succession by the Republicans and—especially—the Democrats.

Far from offering any semblance of “resistance” to Trump’s programme, it was the Democrats who set the record for expanding the “deportation force” into what it is today. In 2018, Trump deported 256,000 undocumented immigrants—a 13 percent increase over 2017, but barely over half of the 409,849 who were deported under Obama in 2012. 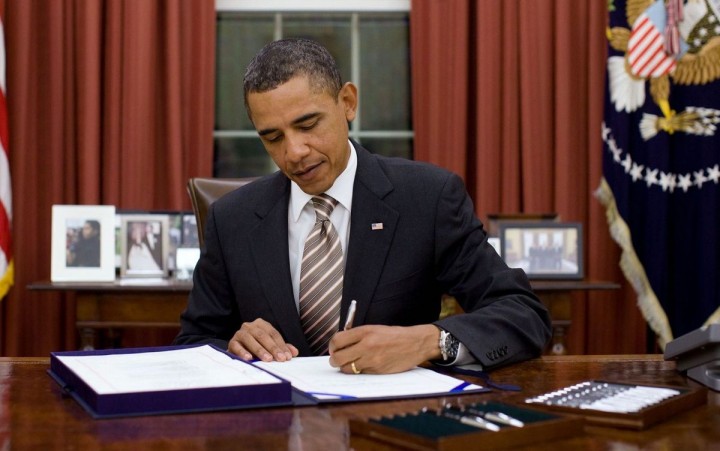 Far from offering any semblance of “resistance” to Trump’s program, it was the Democrats who set the record for expanding the “deportation force” into what it is today. / Image: The White House on Flickr (Public Domain)

In the eight years of the Obama administration, 5.4 million undocumented immigrants were physically apprehended, and 5.3 million were deported, including 3.1 million removals by force and 2.2 million removals by “withdrawal of admission application or order of voluntary departure.” This adds up to an average of 1,815 deportations for every day of that administration. Trump’s daily average is 660 so far. Although Obama’s deportation force never enjoyed the dramatic spotlight that Trump’s attacks have received, the millions of workers who found themselves in the crosshairs of the “Deporter in Chief” know that the Democrats present no less a threat than the Republicans.

A socialist programme to fight the wall

Since the very birth of the movement, the fight for socialism has been internationalist. As Marx and Engels put it in the Communist Manifesto:

The Communists are distinguished from the other working-class parties by this only: 1. In the national struggles of the proletarians of the different countries, they point out and bring to the front the common interests of the entire proletariat, independently of all nationality. 2. In the various stages of development which the struggle of the working class against the bourgeoisie has to pass through, they always and everywhere represent the interests of the movement as a whole.

As the emergent socialist movement begins to take shape in the US, very few voices are putting forward a class perspective in relation to the question of immigration, preferring to treat it as an abstract moral issue of curtailing the brutal repression on the border, without offering anything with which to replace the “border control” of the capitalist state. In order for US socialism to take its first steps, the movement will have to abandon the liberal prejudices that have kept it in a state of infancy up to now. 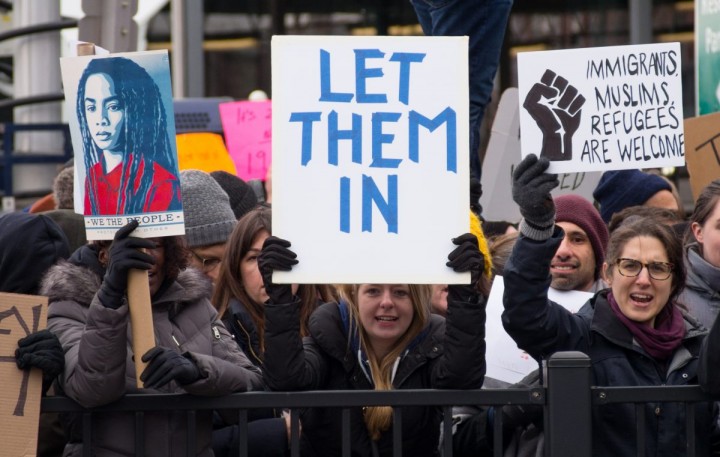 The first task of socialists is to explain that the working class is a global class engaged in a worldwide struggle against the capitalist system across national boundaries. / Image: Rhododendrites on Wikimedia (CC BY-SA 4.0)

In this fight, the first task of socialists is to explain that the working class is a global class engaged in a worldwide struggle for its interests against the narrow and irrational interests of the capitalist system. The two main barriers to human progress today are private ownership of the means of production and the nation state. The needs of the market have driven down working people’s living standards around the world while constraining them within artificial borders erected by capitalism in its epoch of historical ascent, but which no longer serve any progressive purpose.

Today, the nation state is an instrument for protecting the profits of the few and creating a super-exploited layer of the working class, allowing the bosses to drive down wages and threaten workers with replaceability. And while walls and police are used by the capitalists to cordon and cower billions worldwide, they are not respected by the capitalists themselves. As a wealth manager who spent years working for billionaires told NPR: “It’s almost literally unimaginable. National borders are nothing to them. They might as well not exist.”

There is no reason for such borders to exist for anyone. But for a genuine and lasting solution, we must go beyond what is “possible” within capitalism. The only way out of the impasse is for the labour movement to step forward and organise the whole of the working class—whether they are documented or not. By fighting for the immediate and unconditional legalisation of all workers, union rights and high wages, workers can transform the issue of immigration from a weapon of the capitalists to divide us into a working-class weapon against them.