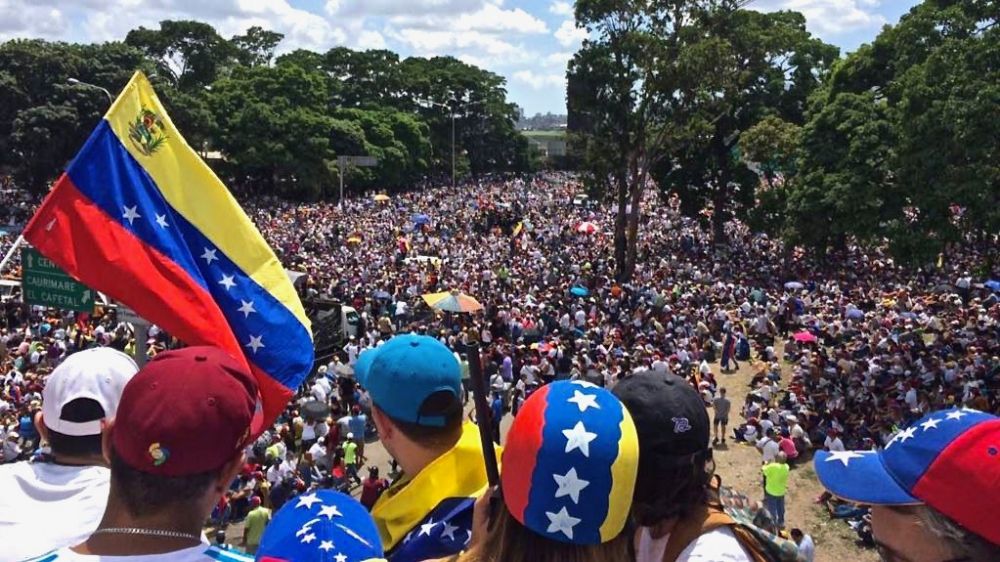 Economic sabotage is an underexposed and underreported tool of the counterrevolution in Venezuela. It is part and parcel of a general plan of destabilisation of the revolution in the run-up to the referendum. The limits of reformism in combating food scarcity stress the need for bold measures, like nationalisation of the food industry and the mobilisation of the masses. No time can be lost!

A recent report from Datanalisis (1) [the Venezuelan statistical service] revealed what already many people knew and suffered from. Scarcity of basic foodstuff is becoming intolerable. This study established that milk, beef and sugar have become very difficult to find. Other products like chicken, cooking oil, cheese, sardines and black beans are also very scarce. The analysts who compiled the report interviewed 800 people in some 60 different shops, supermarkets and markets, both in the private sector and the public distribution network, Mercal. 73,3% of the places visited had no milk powder for sale. 51,7% no longer had refined sugar, 40% had no cooking oil, and 26,7% no black beans, a basic staple in Venezuela.

Two thirds of the shoppers declared that they experienced food scarcity to one degree or another in the shops where they usually buy. Queues of a few hours, sometimes up to four hours, to buy some milk are no longer the exception. This is reminiscent of the situation in Chile when wholesale economic sabotage was used against the left-wing Popular Unity government of the 1970s.

Without giving in to the panic stories and exaggerated reports of the right-wing media, we must understand that this is a serious situation. The bosses have even threatened to extend this situation into the first quarter of 2008, especially because of the uncertainties related to the questions of private property included in the new constitutional reform. They are grabbing the revolution by its throat.

The hysterical campaigns of the bourgeois media are aimed at inducing panic and, more importantly, they want to create dissatisfaction amongst the social base itself of the revolution itself.

The bosses complain of what they call a ‘cerco gubernemental', a governmental siege of private industry and commerce through all kinds of new laws, norms, controls and taxes.

The spokesperson of Conindustria (the industrial bosses' federation) Gomez Sigala, denies the accusations of the government, which blames the private sector for the food scarcity. The current situation, he says, is caused by the "wrong policies of the government."

"The fundamental task of industry is to produce quality goods and services...Unfortunately over recent years we have been hampered by a series of obstacles and barriers which have made it impossible for the national productive system to function normally.

"Those obstacles are the price controls, control of exchange rates, import licences, the new taxes and the general insecurity."

Gomez Sigala also insists on the fact that "since 1998 industry has fallen by 40%. To win back this lost ground much investment will be needed. The governmental policies have the opposite effects. It not only fails to attract new investors, it also chases away existing investment."

Nelson Maldonado, the president of the network of traders in Venezuela, Consecomercio, has the same line of defence. He claims the government is responsible for the scarcity of basic foodstuffs.

"Price controls and control of exchange rates generate scarcity. The more those controls on the economy persists the more scarcity there will be. The traders are not the cause of the situation. This is what you see in all socialist countries."

Then he goes to the core of the bosses' argument: "Scarcity is now the worst in many years. This is a fundamental question. The government claims that there is a crisis in the world market of milk but if you go to Cucuta or Puerto Rico or Miami you will find everything you need. Wherever you go you can find milk. Of course not at 1000 bolivares per litre. That doesn't exist. There is milk available at the price milk really costs."

The core question is indeed that the bosses cannot make the profits they used to make in the past, now that the government has imposed low prices. So the industry basically says: "If you get between me and my profits, I'll starve the population."

The agricultural industry claims to be working at full capacity. Peasant organisations like the Frente Nacional Campesino Ezequiel Zamora, challenge this statement. From their own experience they know that in many places the bosses are refusing to buy parts of their crops of sugar cane, for instance. Workers in the newly established public milk processing plants complain that they cannot work at full capacity because the big owners of milk cow herds refuse to sell them the necessary milk. The deliberate refusal to invest and to expand capacity is also a fact. Actually industrial capacity has been drastically reduced.

Government sources indicate that the number of industrial production units has decreased by 35% since 1998. 6000 companies have closed since the beginning of the revolution. The economy is basically fuelled with public money. This lack of private investment amounts to effective economic sabotage.

Suddenly the private media is championing the case of the poor and their health. Recently El Universal - the bourgeois paper par excellence - dedicated a whole article to the consequences of an unbalanced diet on the health of the population. Food scarcity as a result of the government policies will cause anaemia, growth disorders amongst the children and youth and weakening the elderly!

It is true that price controls and all kinds of other controls have disorganised the normal workings of what is still a capitalist economy in Venezuela. Those measures have been taken with the best of intentions: to guarantee and expand access to basic foodstuff for the broadest layers of the population. Thanks to controlled and low prices the most downtrodden layers of the population now have access to these products. In general the purchasing power of the poor has also increased. A recent report of the Venezuelan American Chamber of Commerce and Industry revealed significant increases in income between 2004 and 2006. 58%, the poorest section of the population, had their real income increased by 130% after allowing for inflation. These gains do not include the benefits associated with the different social programs or ‘Misiones' which provide free education, healthcare, etc. A common explanation for the shortages by the government is that the increase in demand - thanks to increased purchasing power ‑ has not been matched by what the market has to offer.

That is why the Minister of Food, Division General Rafael Oropeza, "invites the industry and agribusiness to increase its production with the aim of covering the local demand in foodstuffs." He fears that the current situation of scarcity is creating a situation of despair amongst the population.

Rafael Oropeza also declared recently that he did not know if this situation has been caused for political reasons or for administrative problems. He also pretends not to know if it is done "on purpose or not"!!!

In reality the public network of food distribution, via Mercal, is trying to cover the demand which is not met by the private sector, that is refuseing to increase production.

Rafael Oropeza's appeal to business to "satisfy demand" is to say the least a bit naive. It also reveals a lack of knowledge of the workings of a capitalist economy. Capitalists do not invest and produce to "satisfy demand" even if they claim to do so. They do it for one reason only: to make profit. If they can no longer make profits they will withdraw investment or reduce it to its minimal expression. This is what is happening today in Venezuela. All the progressive reforms such as price controls, etc., tend to disorganise the normal workings of the capitalist economy. They distort the functioning of a market economy. Reformists in the Bolivarian movement believe those reforms are compatible with capitalism. The reaction of the capitalists should be a lesson, however. They are not compatible with the functioning of a capitalist economy. That is what they are saying every hour of the day. The main demands of the different bosses' organisations are to remove all the control measures of the government. Then they will be ready to respond to the demands for more goods, they claim. This situation pleads for the opposite course. The revolution cannot retreat on this or any other question. Bold measures are needed. Nationalisation of food production and distribution under the democratic control of workers, peasants and communal councils is the best answer to those who are starving the people. The peasant organisation, the FNCEZ, is right when it says to the bosses: "If you refuse to feed us we will take over your factories". It is time to put those words into practice.

The situation of scarcity of foodstuff is not a recent phenomenon, but in the last months it has taken a sharp turn. The timing is of course not accidental. In the run-up to the referendum on the new constitutional reform they hope to reduce the ‘yes' vote or even to win the referendum on a "no" campaign. It is part of a generalised campaign to undermine the revolution on the economic front. Especially the poorest are hit by this scandalous campaign. The aim is evident. By organising artificial scarcity they hope to demoralise exactly those layers of the population who constitute the social base of the revolution. Scarcity, and its inevitable side effect of a black parallel market of high priced goods, can neutralise the effect of increased purchasing power and controlled prices. "What is the point of a revolution if you cannot buy milk anymore?" is a feeling the counterrevolution wants to induce among the population. The politically most backward layers of the revolution can be tempted by this reaction. Especially when bombarded daily by panic reports in the media.

The reaction of the government is a combination of appeals to business to increase production, massive imports of the missing goods and distribution through the network of Mercal and efforts to develop a parallel public food industry. To this must be added limited and very partial expropriations of abandoned companies in the food production chain and mild measures against blatant examples of hoarding, corruption and speculation.

Because Mercal is not working under democratic control it is riddled with corruption. This is also one of the reasons why Mercal is suffering from food scarcity. Huge amounts of Mercal products have "found their way" on to the informal black market. They are being smuggled out of the public network by venal bureaucrats eager to make a fast buck in this situation. Those products are sold by some buhoneros or street sellers at uncontrolled - therefore very high - prices.

The revolution in Venezuela is again at a crossroads. It is being attacked on all fronts. On the economic front it needs urgently to go on to the offensive. Halfway measures applied half-heartedly will not be able to combat the threat of economic sabotage. The economy is the Achilles' heel of the revolution. Until now the reformists in the government have been able to answer those weaknesses with massive public investment and imports financed by the oil revenues. All this is done within the confines of a capitalist economy. They hope to postpone and avoid a confrontation with the oligarchy. All to no avail, as the recent situation shows. The socialist battalions, as the local branches of the newly formed mass United Socialist Party are called, should take the lead with a programme of mass action of workers' control of prices, of the food production chain and nationalisation.