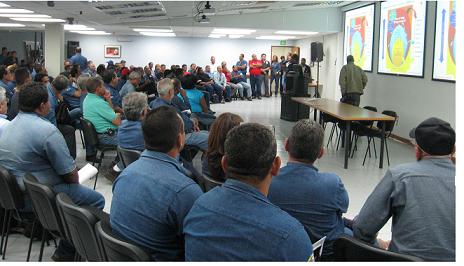 At the end of June I had the opportunity of visiting Venezuela where I attended the national conference of “Class Struggle” (Lucha de Clases), the Venezuelan section of the International Marxist Tendency. What I witnessed is an increased polarisation between left and right, but above all an open clash between the revolutionary wing of the Bolivarian movement and the reformists and bureaucrats. In a series of articles I will attempt to illustrate this.

Jesús Pino One of the most important industrial centres of Venezuela is in the southern state of Bolivar, around the CVG complex of basic industries, producing and processing coal, iron, steel, aluminium, etc. Most of these giant companies are state-owned or have been recently nationalised or re-nationalised by the Chavez government.

Recently a big scandal erupted with the arrest on June 9, 2011, of Luís Velasquez, director of commercialisation at steel company SIDOR, accused of corruption. Velasquez was the head of the so-called “cabilla mafia”, which was involved in the large scale theft of cabillas, the steel bars used in construction. An example of this is the theft, in November 2010 alone, of 12 lorries loaded with 336 tonnes of cabillas, worth BsF 1.6 million (373,000 USD). Velasquez was also a member of the boards of management of the recently nationalised CEMEX and Lafargue (cement), Orinoco Iron (Iron) and Briqven (formerly Matesi, iron briquettes).

Cabillas are extremely important, as the Bolivarian government has launched the Misión Vivienda (Housing Programme) in an attempt to solve the problem of the chronic lack of proper housing in Venezuela. Its aim is to build 2 million new homes by 2018.

I had a chance to speak to Jesús Pino, a leading member of the Revolutionary Front of Steel Workers at SIDOR, about this case. Pino had travelled to Britain in 2008 to attend the Hands Off Venezuela national conference (see video interview) just after the struggle of SIDOR workers had won the renationalisation of the company by president Chávez. At that time, Pino insisted that nationalisation in itself was not enough, as many of the former managers were still in place, and that workers’ control was the only way forward. In 2010, at a meeting of the Socialist Guyana plan dealing with the future of the industry, workers asked president Chavez to introduce workers’ control and Chavez agreed, saying “I stake my future with the working class”. Worker-directors, selected by the workers, were appointed to head many of the CVG companies, including Carlos d’Olivera in SIDOR and Elio Sayago at aluminium smelter ALCASA.

Slowly but surely, workers in a number of these giant companies have advanced towards implementing workers’ control and management. However, they have met resistance, not only from old managers, but also from the bureaucracy of the Bolivarian movement itself. These companies generate massive resources and with them widespread mafioso networks selling contracts for supplies, repairs, maintenance, and directly stealing materials to be sold on the black market.

It is clear that Luis Velasquez is just the tip of the iceberg of a much wider operation. One does not steal lorry-loads of steel bars on one's own. As the Revolutionary Front of Steel Workers has denounced publicly, Velasquez is a personal friend of regional “Bolivarian” governor Francisco Rangel Gómez. Jesús Pino told me that he is afraid that people high up in the region and the national government are exerting strong political pressure to prevent the investigation of the cabilla mafia from going any further. He even said that some of the workers at Briqven and Orinoco Iron who provided proof against Velasquez were now being threatened with dismissal.

Pino insisted that it is important to stress how the struggle against this mafia was only possible because and as a result of workers’ control. The worker-director of SIDOR acted together with the SUTISS union to find the proof and alert the authorities about the situation. Clearly, this shows that the only effective way to combat corruption and bureaucracy is precisely through the democratic participation of the workers at all levels of the management of the companies.

Apparently Velasquez, amongst other things, was also diverting cabillas, which are sold at subsidised prices in order to promote social house building, to companies he is involved with in the private sector, which would then sell the cabillas on the black market at 3 or 4 times the official price. Other materials were diverted to Colombia and Brazil where there are no regulated prices and where Velasquez also has business interests.

This also shows that you cannot really regulate the capitalist market. Either you take over the means of production and integrate them in a democratic plan of production, or the anarchy of the profit making motive of capitalism will sabotage any attempts at regulation. If private capitalists (for instance in food production) think that the profit margin they are allowed to make with regulated prices is not enough, they will either shift production to other non-regulated products, or they will sell them to other countries or on the black market at higher prices.

There are also powerful interests within the Bolivarian movement opposing workers’ control in the basic industries in Guayana. Bureaucratic “chavista” trade union leaders from the Bolivarian Socialist Workers' Front (FSBT), previously the FBT, have organised a concerted campaign to sabotage and undermine the very advanced elements of workers’ control which have been introduced through the struggle of the workers and the support of president Chávez.

They also have the support of the regional governor Rangel and the former Minister of Labour, José Ramón Rivero. In fact Rivero opposed the struggle of the SIDOR workers for renationalisation while he was a Minister, sent the National Guard to repress them, and was finally removed when Chavez announced renationalisation (Chavez re-nationalises SIDOR). He is  now a member of the National Assembly and Commissioner for Special Affairs (whatever that means) to Bolivar regional governor Rangel. The FBT was formerly led by Nicolás Maduro (now Foreign Affairs Minister) and many of the activists involved in the struggle for workers’ control in the basic industries fear that he has kept his links with his former comrades in the trade union movement. 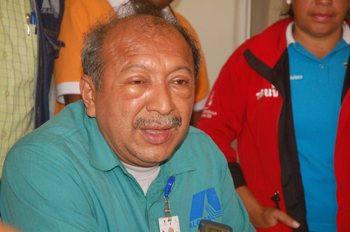 Elio Sayago after being attacked. Photo: aporrea.org The different FSBT unions in the various companies that are part of the CVG complex have organized a concerted campaign against the worker-directors and workers' control in general. This campaign has nothing to do with genuine trade union democracy, but rather uses mafia type methods, including physical assaults by armed thugs. A worker at Ferrominera del Orinoco (FMO) was killed in early June in a gun fight at the company gates over trade union elections. Having control of the union in any of these companies gives these bureaucrats power, privileges and access to key information about contracts, suppliers, etc., and with it the possibility to bribe and steal.

One of the targets of this bureaucracy is Elio Sayago, the long standing revolutionary activist, who is now the worker-director of ALCASA. The FSBT bureaucracy, with the backing of a small group of workers, organized a blockade of the factory gates in June this year which lasted for 34 days, including violent clashes in which a member of the FSBT threatened other workers with a gun. He was arrested, but quickly released because of pressure from Rivero and governor Rangel. When Sayago, backed by those workers who support workers’ control, attempted to access the installations he was brutally beaten up. The day after, Sayago was accused by two women workers, members of the FSBT, of assaulting them, even though there is video evidence of the attack having been against him, not the other way round.

As Jesús Pino and Elio Sayago explain, this network of powerful interests, involving corrupt politicians, trade union bureaucrats, judges, regional newspapers, state company directors and others is also linked to multinational interests. Jesus Pino specifically mentions Swiss based commodities trader Glencore, which is opposed to any attempt to process aluminium in Venezuela into elaborated products and wants to purchase just the raw material in order to sell it on the international market.

Under capitalism, the CVG industries had been developed by the state, using oil money, to fulfill a role that the private sector, the parasitical Venezuelan ruling class, was unable and unwilling to do. The CVG had become part of a system in which the state mined iron ore, coal, produced electricity and finally delivered cheap basic products of iron and aluminum to the private sector, which then sold them at a massive profit margin.

The nationalisation of companies like Briqven and Orinoco Iron was meant to break with this structure and gear the CVG to fulfill Venezuelan national needs, particularly in the house building sector. As a matter of fact, already in 2010, the workers’ management at ALCASA decided not to sell aluminum to multinationals Glencore and Noble and in January 2011 announced that it was advancing talks to other aluminum CVG companies to do the same.

Here we see how even the basic attempt to develop a national based industry to satisfy the needs of Venezuelans, for instance, regarding housing, is completely impossible without on the one hand expropriating the means of production, and on the other putting them under workers’ control as part of a democratic plan of the economy.

We can also see clearly how the interests of the “Bolivarian” bureaucrats at different levels of the state apparatus and the trade union movement coincide, in the last instance, with the interests of the multinational companies, and how and why they are frontally opposed to any attempt to introduce workers’ control. 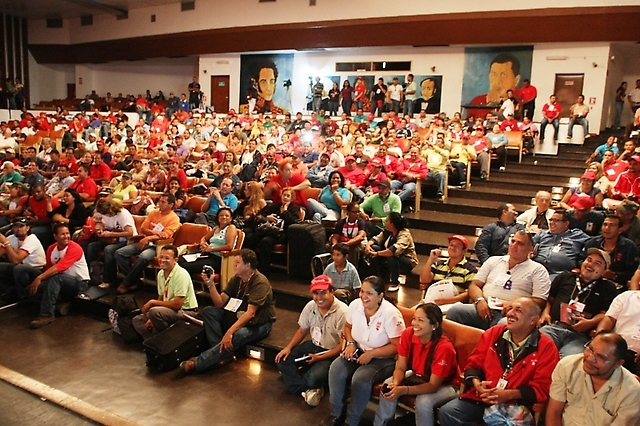 The workers are facing powerful enemies, but they also have a proud revolutionary tradition. During the bosses lock out in December 2002, CVG workers maintained the factories working and refused to join in the counter-revolutionary attempt. Furthermore, thousands of SIDOR workers requisitioned company buses and travelled to the Anaco PVDSA gas plant, in Anzoategui, forcibly crossing police lines, to reestablish gas supply to SIDOR and other CVG companies. This was at a time when SIDOR was in the hands of the Argentinean multinational Techint, whose management was part of the conspiracy to overthrow president Chavez and put an end to the revolution.

Finally, in a long struggle in 2007/08, they faced the national guard, the multinational and the bureaucrats and reformists within the Bolivarian government, to win the renationalization of the SIDOR.

Workers at SIDOR, ALCASA and other companies, responded to this assault by organizing the National Gathering for Workers’ Control which took place in May in the main theatre hall in SIDOR (Balance del encuentro en Guayana). More than 900 representatives of Workers Councils, occupied factories, trade unions and revolutionary workers’ organizations meet for two days to discuss the challenges facing workers’ control and a plan of action. The meeting passed a very sharp and clear manifesto entitled “Neither capitalists nor bureaucrats – all power to the workers” (Manifesto del I Encuentro Nacional por el Control Obrero) and agreed to call a national demonstration on July 26 in Caracas.

In the basic industries in Bolivar we can see in a nutshell all the contradictions facing the Venezuelan revolution. But most importantly, we can also see the only force that can solve those contradictions and guarantee the final victory of the revolution: the organized revolutionary working class.