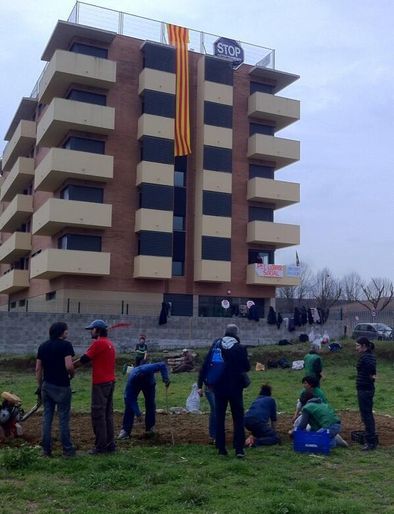 This morning, a last minute decision by the European Court of Human Rights stopped, temporarily, the eviction of 43 people who have been occupying an empty block of flats in Salt, Girona, known as #BlocSalt. Over 700 people, organised by the anti-eviction movement PAH, had gathered overnight to resist the court order, including a large contingent of firefighters in uniform. This case highlights one of the most scandalous features of the housing crisis in Spain.

The families who live in BlocSalt consist of 43 people including 21 minors. They took it over in March this year as part of a campaign by the Plaftorm of those Affected by Mortgages (PAH) to highlight the housing crisis and attempt to provide concrete solutions for families being evicted from their homes. The building was a newly built finished block of flats which belonged to Mare Nostrum bank and had been empty for three years at the time of the occupation.

Mare Nostrum was the result of the merger, in 2010, of three regional savings banks and at the time of its creation it received 900 million euros of state funds, through the bailout fund FROB. In 2013 it was bailed out again, to the tune of another 730 million euros. Finally Mare Nostrum’s assets were forcibly transferred to SAREB, the “bad bank” created under the European bailout of Spanish banks to dispose of the “bad” assets held by bailed out banks. SAREB is 45% owned by the Spanish state.

So here we have the scandalous situation of a partly state-owned bank wanting to evict families from a block of flats it owns, so that the building remains empty, while these very same families have been left homeless by the same banks that the state has bailed out! This only makes sense under the logic of capitalism in which the rights in private property of a few bankers take precedence over the right to housing of ordinary working people.

Hundreds of thousands of people have had their homes repossessed in Spain as they are unable to pay their mortgages as a result of the economic crisis. The huge housing bubble with which Spain experimented prior to 2008 was a major factor in the economic boom the country witnessed and also played a key role in sparking the recession. Families were encouraged to get into massive mortgage debt by bankers at a time when there were plenty of jobs and house prices seemed to be in a never ending virtuous upward spiral.

When the recession struck, people lost their jobs, became unable to pay their mortgages and hundreds of thousands have been evicted. Eviction is not the end of their suffering, as under Spanish mortgage law, families are liable for their debts even after their home has been repossessed. So, for instance a family which purchased a flat for 200,000 euros at the peak of the boom and had paid off 20,000 at the time of repossession might find itself in a situation where their flat is now worth only 100,000 and so they would be left homeless, having to pay rent somewhere, while still owing 80,000 to the bank. To this figure one would have to add interest accumulated for late payment, etc. There have been cases in which the bank repossesses the property and the family is left with a debt higher than the original mortgage.

The situation is made more scandalous by the fact that many of the banks carrying out evictions have been collectively bailed out to the tune of tens of billions of euros with tax-payers’ money. Clearly, in the capitalist casino, the bank never loses!

The anti-eviction movement around the PAH and other organisations have been demanding a change in the law which would allow mortgage debt to be settled by repossession of the property (dación en pago) and to allow families to stay in the property after repossession by paying social rent on it.

The movement has used mass mobilisation and direct action to physically prevent evictions, (over 800 stopped so far) and combined this with pressure on the banks and institutions to agree to their demands on a case by case basis. To give an idea of the scope of the movement, early this year it managed to collect 1.4 million signatures to present a Peoples Law Initiative to Congress on their main demands and despite attempts to criminalise their methods, they have remained firm and command overwhelming popular support.

BlocSalt is one of 13 different blocks of flats which have been taken over by the PAH, housing over 700 people who have been evicted from their homes. (VIDEO of a recent occupation of a block of flats in Madrid: 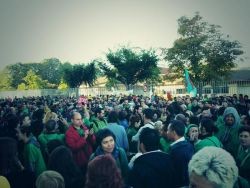 In the case of the BlocSalt, in Girona, once the date for the eviction was set, after months of constant harassment on the part of the authorities, the PAH launched a mobilisation campaign. Activists from the PAH and other movements travelled to Salt, Girona, to physically prevent the eviction of the 43 people living in the block. Over 700 people were registered and spent the night of October 15 to 16 in the premises. Significantly, 100 firefighters, a group of workers who have pledged, nationally, not to take part or collaborate in any eviction, also travelled to Salt, wearing their uniforms and joined in the resistance.

A group of 38 MPs from the Catalan parliament belonging to ICV-EUiA, CUP, ERC and PSC had signed a statement opposing the eviction and asking the Catalan police force, the Mossos, to disobey the order to carry it out. More interesting was the debate which took place in the Girona municipal council, when a motion was put opposing the eviction. ICV-EUiA, CUP and PSC voted in favour of the motion, but the Popular Party (right wing ruling party in Spain) and CiU (nationalist bourgeois, in power in Catalonia) both voted against, and the local mayor (from CiU) even had to use his casting vote to defeat the motion. This is significant because PP and CiU are supposed to be mortal enemies when it comes to Catalonia’s right of self-determination, one using Spanish nationalism, the other using Catalan nationalism. The vote at the Girona council showed clearly that the bourgeois is united above national flags when it comes to protecting the right to private property.

At the very last minute, as the eviction was about to go ahead and over 700 people were ready to resist it, a ruling from the European Court of Human Rights stopped it and declared a delay in the eviction until October 29. Of course, this victory is not due to the ECHR in Strasbourg, but is the victory of the hundreds of activists who mobilised on the ground and were prepared to take direct action to prevent the eviction. It gives the movement a temporary respite to gather its forces and increase the pressure through mass mobilisation.

What this case, and the hundreds of thousands of others throughout Spain, highlights is the madness of the capitalist system, where for a few people to make a profit it is necessary that houses are empty, while people are homeless.

See also this video and this picture gallery and background to the story here.