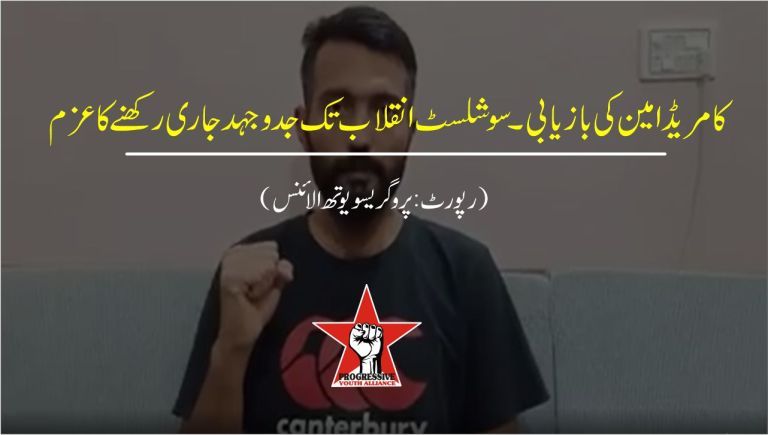 Comrade Amin arrived at his home in Karachi in the early morning of 1 August, following 18 days in confinement, after being abducted on 14 July by the Rangers (a paramilitary organisation in Pakistan). His release was only possible due to our international campaign, and solidarity from comrades and sympathisers of the IMT across the whole world. Amin's family and all the comrades in Pakistan are extremely thankful to all the comrades and friends who participated.

In his days of confinement, Amin was held in different places and brutally tortured by his abductors. During torture, the Rangers and other security agencies of Pakistan accused him of heinous crimes that he never committed, and tried to force him to confess. But despite the extreme torture and threats of death, he refused to confess to those accusations and continuously said that he had never committed any crimes in his life. He said:

“I am a political worker linked with the IMT and I have nothing to do with any criminal gang or people doing such criminal activities.”

It was quite possible that he might have been brutally tortured for many more months or even years; or simply killed and thrown out on a street in Karachi. However, the campaign by comrades of the IMT inside Pakistan and across the world rescued him. His abductors were forced to release him and he has now reached his home.

The tortures used during confinement included hanging Amid upside down for long hours, accompanied by severe beatings with sticks and other implements, and electric shocks to his body and genitals. He was kept blindfolded during this whole period and was not allowed to sit or lie down, but had to remain standing during all these days.

Divide-and-rule and the MQM

Comrade Amin belongs to a middle-class Mohajir family in Karachi. The Mohajir are Muslim refugees from India that arrived in Pakistan after partition and have lived there since. Amin has been involved in politics from a very young age. In the Urdu-speaking or Mohajir community of Karachi, options for political activities are very limited and he was forced to join such reactionary, right-wing parties as the MQM to gain his initial political experience.

The betrayal by the leadership of the PPP weakened the labour movement; and the ruling class of Pakistan – following in the footsteps of British and American imperialism – moved forward with their plans. First of all, they moved to cut off the largest section of the population in Karachi, the Mohajirs, from other nationalities. Riots, killings and bloodshed were orchestrated to sow the seeds of hatred among the working class on linguistic and nationalist lines, after which a student organisation called APMSO and later the MQM were founded. The collapse of the Soviet Union and weakness of the labour movement across the country gave the MQM a social base. Its reactionary, right-wing politics dominated over the Mohajirs of Karachi, and subsequently held sway over the whole city.

The MQM also started having conflicts with its masters, and there were huge military operations in Karachi against the MQM in 1992 and 1995, but these couldn't end the support for the MQM among Mohajirs. Rather, it got more support from middle-class elements, and fascist tendencies developed in it. With its support growing, the leader of the party changed the name of the MQM from the Mohajir Qaumi (Mohajir National) Movement to the Muttahida Qaumi Movement (United National). After this, it got support from the Mohajirs of Hyderabad and other cities of Sindh, and later tried to expand to other parts of the country as well.

During the dictatorship of General Musharraf, who himself was a Mohajir, this party got huge support from the state authorities and was an important part of the government at federal and provincial level. Even before this, it was an important part of different governments, but now it had much more authority in the affairs of state. This gave a huge impetus to illegal and criminal activities within the party, which was already involved in extortions, land grabbing, money laundering, kidnappings for ransom and much more under the direction of its leader Altaf Hussain, who has been in exile in London for almost three decades now. The more powerful it became, the more deeply the party was corrupted, and it became an outfit of organised terror in the city.

After the Musharraf regime in 2008, the MQM was still a big force but the hatred it attracted given the ongoing orgy of crime, loot and plunder alienated huge layers of Mohajirs. In those critical times, the PPP leadership had the chance to win these layers over, but the party leadership was more degenerated than ever and working in total collaboration with the state authorities to crush the working-class movement across the country, exploiting the Sindhi-Mohajir divide and other reactionary tactics to perpetuate its rule. In this situation, the state authorities backed up more terror outfits and criminal gangs on nationalist and religious lines to crush any possibility of genuine working-class unity.

This situation, combined with a lack of any alternative, hindered any movement against the MQM by the Mohajirs, who were fed up with the criminal role this party played in all these decades. The party was also unable to solve a single issue facing the people, including unemployment and poverty, and social crises had reached an unprecedented level under its rule. This eventually led to internal weakness and factionalising within the MQM, which reflected its terminal crises on one hand, and on the other, the influence of factions within the state, which were supporting various party leaders against one another. Imran Khan's PTI also had the chance to get support in Karachi but failed miserably, despite backing from the state in this endeavor.

All this has left a huge vacuum in the city of Karachi, and the state authorities are frantically trying to patch up one faction of the MQM or another, and impose it on the city once again. But on the ground, the situation has transformed completely and no options put forward by the authorities are getting any support among the masses. One such party is the PSP, led by former mayor of Karachi, Mustafa Kamal: a leader of the MQM in the past, which has miserably failed time and again in the last five years despite getting huge media coverage and support by the state authorities. During his confinement, Amin was asked to work for this party when released. Also, his family was asked by various unknown sources to approach the leadership of this party if they wanted to secure the release of Amin. But Amin and his family refused to follow this line or to join any other faction of MQM. During his torture, Amin said that if gets a chance to live again he will only work for IMT, as this is the only organisation he thinks is working on correct lines.

Amin abandoned the MQM in 2017 due to its degeneration and factional maneuvering. In that time, the Progressive Youth Alliance was active around the country on the issues of free education for all and for the restoration of student unions. There were public meetings being held by the PYA in different cities across the country and a social media campaign was also in full swing. The PYA was also active among the Pashtun masses and in their resistance movement for their basic right to live. This ray of hope also reached Amin and his sister, who decided to join the IMT and PYA after long political and theoretical discussions. Both of them were attending meetings of the organisation for the last two years.

During his confinement, Amin was told to admit that he still works for MQM London, which he denied again and again, and said that he only works for IMT. When the abductors failed in this they tried to poison him against the IMT, slandering its leadership and saying they will take it to task very soon. Amin was also threatened with dire consequences if he continued his work with the IMT. Warnings were also made against leading female comrades of IMT, as well as Amin's sister, who were threatened with all kinds of barbaric acts. Death threats against the leadership of the IMT were also given. The abductors said that they are the owners of this country and nobody can say anything against them. They also said that they have killed many people in confinement before, and have thrown their bodies onto the streets of Karachi many times.

But during all this, the marvellous solidarity campaign for the release of Amin forced his abductors to release him. This is not just a victory for the IMT, but for all the left-wing political workers of this country. We also thank other left-wing organisations of Pakistan who participated in this campaign wholeheartedly, and joined the protests and demonstrations despite intimidation and threats.

Comrade Amin's resolve is now strengthened more than ever. He is totally committed to the cause of socialist revolution in Pakistan, and is determined that this is the only way forward for the oppressed people of this country. Marxists have said time and again that it is easy to kill a man but no one can kill an idea whose time has come. This is also true in Pakistan, where the crisis of capitalism is throwing millions more into poverty, misery and destitution. For them, the only way out of this abyss is a revolutionary overthrow of this horrible system based on exploitation and brutal oppression.

While the rich continue to live in extreme luxury, the poor are forced to endure brutal conditions, and any hint of dissent and resistance is met with torture and oppression. But, as it is said, the night is darkest just before dawn: the desperation of the Pakistani ruling class and its brutal methods tell that the dawn of a socialist future is not far away.

Comrades of the IMT, including Amin and his sister, vow once again to fight for this noble cause and will continue their struggle against these forces of dark reaction to their last breath. This is the only hope for the whole of humanity, and we will sacrifice every last drop of our blood for this cause, which is the only one worth living for and dying for.