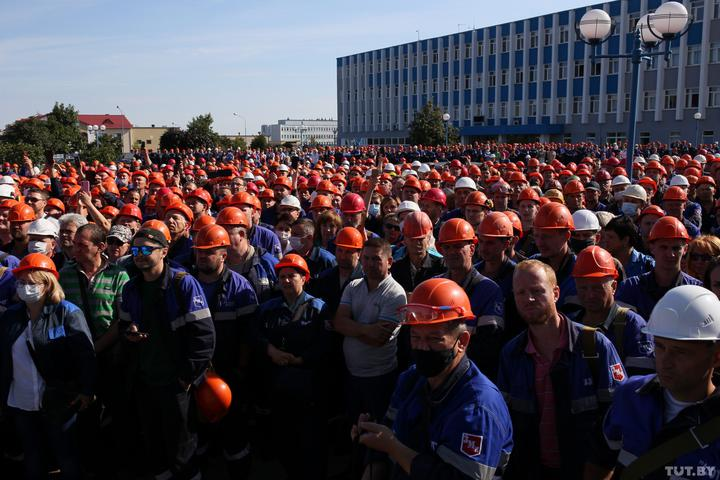 As the situation in Belarus unfolds, our comrades once again call on the working class to seize control of their own destinies with independent methods and bodies of struggle.

Despite the fact that Lukashenko has so far managed to retain power, the regime's position remains extremely precarious. First of all, as we noted earlier, the Belarusian working class entered the arena of political struggle. A vivid illustration of the attitude of workers towards the dictator is an incident this week, after the announcement of the results of the presidential elections, which no one in their right mind can call free and fair.

Hoping to symbolically consolidate his power and demonstrate that the workers support him, on 17 August Lukashenko went to the Minsk Wheeled Tractor Plant [MZKT] with the intention of speaking to the workers. Clearly counting on the silence of the workers, the dictator began in his speech mixing self-confidence with intimidation. At the moment when, at his command, the wiretapping of a telephone conversation was turned on, which was supposed to present “compromising evidence” on the opposition (in this sense, very dubious if you look at the content of the conversation), the patience of the workers broke and in the direction of the tribune there was a thunder of voices chanting: “Go away!”

Confused, obviously not expecting such a reaction, Lukashenko did not find anything better than to say into the microphone: “Thank you,” as if he did it automatically. This is what the face of the anti-workers' dictatorship looks like, faced with opposition from the masses and not knowing what to do now.

August 17, Lukashenko went to speak to workers at the huge MZKT (Wheeled Tractor Factory). The audience was handpicked, still workers shouted back "go away!", he responded, in auto-pilot, "thanks" pic.twitter.com/5x3fQwKEq9

As we said earlier, the working class of the republic has clearly awakened for political struggle and is currently the most powerful social force. But it is also impossible to ignore the fact that it is in many ways at the moment only at the beginning of this path; walking along it, as it were, on a whim among the minefield of the old institutional policy in which the dilemma has always stood between the dictatorship of Lukashenko on the one hand, and the bourgeois liberals (and the the nationalists adjoining them) on the other. Unfortunately, in all previous years, the left political spectrum (although we perfectly understand how difficult it was to conduct political activity in this country) could do little to break this vicious dilemma, and now we are reaping the fruits of this.

In these difficult conditions, we can observe how the right-wing (liberals) clearly strive to push the working class away from the political process, thus extending a helping hand to the dictatorship. The clearest example of this is the composition of the so-called Coordination Council, created this week, to ensure the transfer of power. It was formed under the patronage of Svetlana Tikhanovskaya (the liberal presidential candidate) who is currently in Lithuania. This coordinating council has absorbed all the worst kinds of liberal and nationalist scum that hate the working class and socialism, but do not represent, in themselves, a serious social force. But what is the representation in this council of the working class – the most powerful force in the country which has shaken the foundations of the regime with strike action? One person from BMZ [Byelorussian Steel Works]. It is not difficult to guess at what policy a “democratic” body with such a majority will strive for, and where it can lead the situation in the country (if such a body is capable of taking power at all). As we have warned, the taking of power by the bourgeois liberals in this coordination council would be a disaster for the working class and would lead to the wholesale closure of state companies, further attacks on workers’ rights and pensions, etc.

However, it would be unfair to say that the working class is simply going with the flow of someone else's political game, without making independent demands. Through its own strike committees, workers in the main factories are starting to advance their own programme. The leaflet published by the largest strike coordination body in the country at present, Zabastabel [Strike Belarus], among others, contains such demands as: 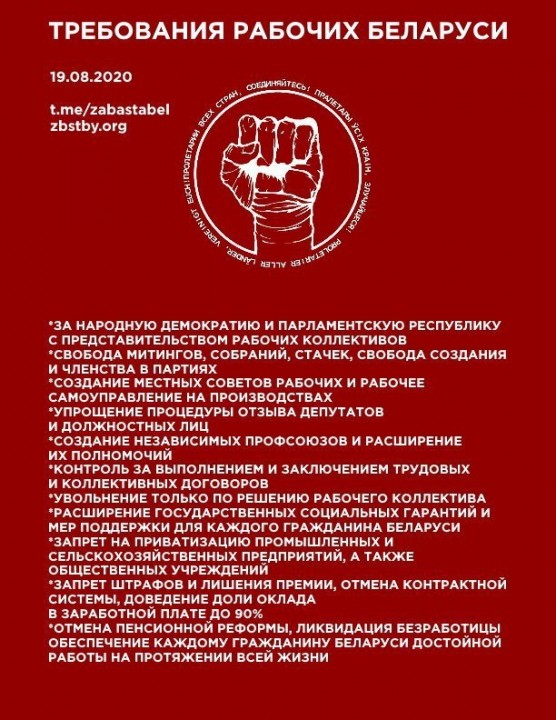 Already here we see how the working class begins to feel for its own path and its own political demands. This is where the real class alternative to the vicious dilemma of previous decades is born. But this leaflet also reflects the contradictory mood in the working class itself at the present time. Many illusions remain intact. So in it, as one of the first demands, it contains a call for the establishment of a parliamentary republic “with the representation of workers' collectives", which leaves a window for concessions to the right.

Despite this, the question of the outcome of this movement has not yet been settled. History has shown that when the working class actively enters the arena of political struggle in extreme conditions, it learns very quickly and corrects its mistakes. In order to move forward, the working people of the country must completely break with the idea of finding common ground with the right and form an independent political center.

This idea is already present in the latest appeal by ZabastaBEL. In response to an appeal for unity made by bourgeois liberal leader Tikhanovskaya, they remind the workers of the anti-working class programme of attacks of the liberal opposition:

“We remind the workers that solidarity with those who yesterday wanted to deprive you of social security, your enterprises and tomorrow, reduce the cost of free medicine and education, get the right to quick dismissal at the initiative of the employer, today play for their class interests, and not for yours. It is always easy to form ‘friendships’ against someone else, but we have no reason to make ‘friendships’ with these kinds of ‘representatives’ of the people.”

Our recent statement stressed, precisely, the need for the workers to create their own independent bodies of representation. Here is the text of the appeal of the Marxist tendency, published on August 18 in Russian and Belarusian:

“The working class plays an important role in the struggle of the Belarusian people against the dictatorship. Collective actions of workers – meetings, demonstrations and, above all, strikes – make the punishers stop. It was under the pressure of the working class that some of the detained protesters were released, it is in front of the workers that Lukashenko is forced to offer excuses, but never admit his guilt.

“We see that only the working class can complete the process begun. But this requires coordination and organisation. In fact, strike committees already exist in dozens of enterprises. But who will express the general demands of the workers at the national level?

“So far, there is only one BMZ representative in the Coordination Council for the transfer of power, formed by Tikhanovskaya. This is paradoxical – the workers who played a decisive role in the movement against the dictatorship do not have their representatives in the body that develops the current protest agenda!

“We, the communists, as the most consistent democrats, declare that only bodies democratically elected by the protesters can first win, and then decide on the future of Belarus. The Coordination Council of Strike Committees of Belarus can and should become such a body.”