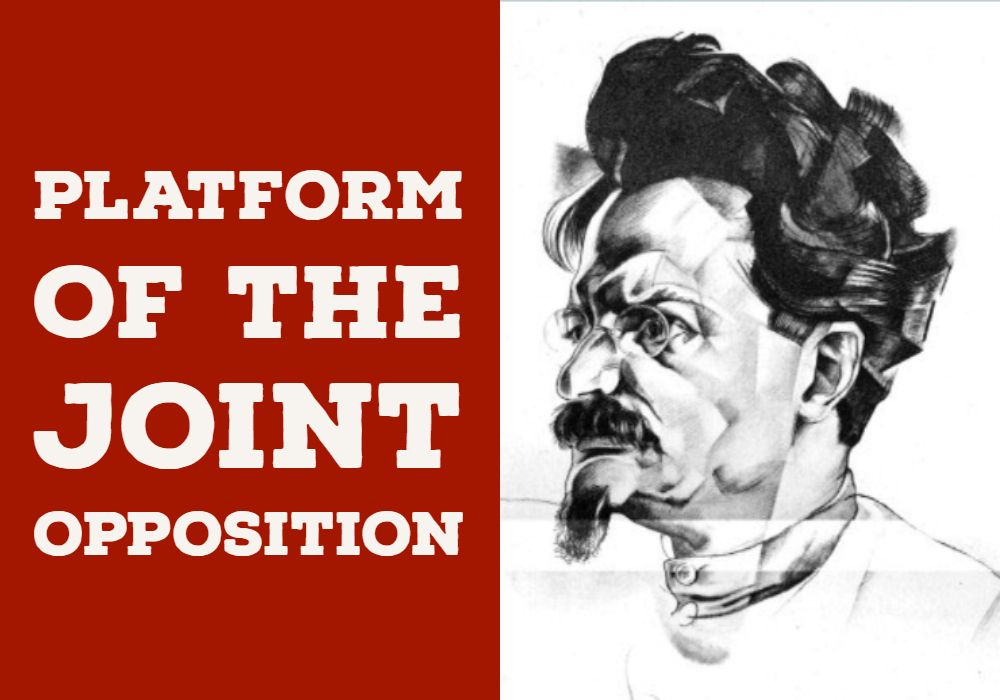 Nothing testifies so surely to the erroneous political course of the Stalin group as their unceasing determination to quarrel not with our real opinions, but with imaginary opinions which we do not and never did hold.

The most elementary conditions for an honest inner-party debate are not observed. On the question of the Chinese revolution, a question of world importance, the Central Committee has not printed up to the present time one word of what the Opposition says. After shutting the lid down tight on the party, and cutting off the Opposition from the party press, the Stalin group carries on against us an uninterrupted argument, attributing to us from day to day a continually increasing series of stupidities and crimes. The party member becomes every day less inclined to believe these accusations.

(1) When we state that the present stabilisation, of capitalism is not a stabilisation for decades, and that our epoch remains an epoch of imperialist wars and social revolutions (Lenin), the Stalin group attributes to us a denial of all elements of stabilisation in capitalism.

(2) When we say, in the words of Lenin that for the construction of a socialist society in our country, a victory of the proletarian revolution is necessary in one or more of the advanced capitalist countries, that the final victory of socialism in one country, and above all a backward country, is impossible, as Marx, Engels, and Lenin have all proved, the Stalin group makes the wholly false assertion that we “do not believe” in socialism and in socialist construction in the Soviet Union.

(3) When, following Lenin, we point out the growing bureaucratic distortions of our proletarian state, the Stalin group attributes to us the opinion that our Soviet state is not proletarian at all. When we announce before the entire Communist International that “anyone who, attempting either directly or indirectly to support us, shall at the same time deny the proletarian character of our party and our state and the socialist character of construction in the Soviet Union, will be ruthlessly opposed and rejected by us” – the Stalin group conceals our announcement and continues its slander against us. [1]

(4) When we point out that Thermidorian elements with a sufficiently serious social basis are growing in the country; when we demand that the party leadership offers a more systematic, firm, and planful resistance to these phenomena and their influence upon certain links in our party, the Stalin group attributes to us the announcement that the party is Thermidorian, and that the proletarian revolution has degenerated. When we announce to the entire International: “It is not true that we accuse the majority of our party of a right deviation; we merely think that there are right tendencies and right groups in the Russian Communist party which now have a disproportionate influence, but which the party will overcome” – the Stalin group conceals our announcement and continues to slander us. [2]

(5) When we point to the enormous growth of the kulak, when we, following Lenin, continue to assert that “the kulak cannot peacefully grow into socialism”, that he is the most dangerous enemy of the proletarian revolution – the Stalin group accuses us of wishing to “rob the peasants”.

(6) When we draw the attention of our party to the fact of the strengthening position of private capital, of the immoderate growth of its accumulation and its influence in the country, the Stalin group accuses us of attacking the NEP and demanding a restoration of War Communism.

(7) When we point to the incorrectness of the party policy as to the material condition of the workers, the inadequacy of the measures against unemployment and the housing shortage; and especially when we point out that the share of non-proletarian elements in the national income is growing immoderately – they say that we are guilty of a “guild-socialist” deviation, and of “demagogy”.

(8) When we point to the systematic lagging of industry behind the demands of the national economy, with all its inevitable consequences – disproportion, goods famine, rupture of the link between town and country – they call us “superindustrialisers”.

(9) When we point to the incorrect price policy, which is not reducing the high cost of living but making possible frenzied profiteering by the private capitalist, the Stalin group accuses us of advocating a policy of raising prices. When a year ago we announced to the entire International: “The Opposition never in any of its utterances demanded or proposed a raising of prices, but saw the chief mistake of our economic policy exactly in the fact that it does not lead with sufficient energy to a reduction of the goods famine with which the high retail prices are inevitably bound up” – our announcement was concealed and the slander continued. [3]

(10) When we speak against the “hearty accord” with the traitors to the General Strike, the counter-revolutionists of the British General Council, who are openly playing the role of Chamberlain’s agents, we are accused of being opposed to the work of Communists within the trade unions and against the tactic of a united front.

(11) When we oppose the entry of the trade unions of the Soviet Union into the Amsterdam Trade Union International, or any kind of flirting with the leaders of the Second International, we are accused of a “social-democratic deviation”.

(13) When, on the basis of our evaluation of the world situation, we come to the conclusion that war is approaching, and warn the party of this in good time, the Stalinists bring forward against us the dishonest accusation that we “desire war”.

(14) When, true to the teaching of Lenin, we point out that the approach of war demands only the more insistently a firm, definite and clear-cut class policy, the Stalinists shamelessly assert that we do not want to defend the Soviet Union, that we are “conditional defenders”, semi-defeatists, etc.

(15) When we point out the indubitable fact that the entire world Press of the capitalists and Social Democrats is supporting Stalin’s struggle against the Opposition in the Russian Communist party, praising Stalin for his repression of the left wing, and summoning him to cut off the Opposition and expel it from the Central Committee and from the party, Pravda and the entire party and Soviet press day after day deceitfully pretend that the bourgeoisie and the social democracy are “for the Opposition”.

(17) When, under the existing perverted party regime, Oppositionists who are devoted party members attempt to inform the membership of their real opinions, they are thrown out of the Russian Communist party. They are accused of “factionalism”. Proceedings are got up over alleged attempts to split the party. The most important party questions, instead of being discussed, are covered up with rubbish.

(18) But the favourite accusation of late years is the accusation that we believe in “Trotskyism”. We announced to the whole Communist International [4]: “It is not true that we are defending Trotskyism. Trotsky has stated to the International that in all those questions of principle upon which he disputed with Lenin, Lenin was right – and particularly upon the question of permanent revolution and the peasantry.” That announcement, made to the whole Communist International, the Stalin group refuses to print. It continues to accuse us of “Trotskyism”. The above-quoted announcement relates, of course, only to those disagreements with Lenin which existed in fact and not to those “differences” unscrupulously invented by Stalin and Bukharin. The relation which they pretend to discover between our differences in the remote past and the practical disagreements which arose in the course of the October Revolution is imaginary.

We note as unfair fighting the attempt of the Stalin group to distract attention from the views of the Opposition, as expounded in the present platform, by references to earlier disagreements between the groups existing in 1923 and 1925. These disagreements have now been resolved on the basis of Leninism. The mistakes and exaggerations committed by both groups of Bolsheviks in the dispute of 1923-1924, as a result of a series of obscurities in the state of affairs in the party and in the country, are now corrected, and offer no obstacle to a hearty co-operation in the struggle against opportunism and for Leninism.

By tearing quotations from their context, by a crude and dishonest misuse of partially-selected old polemical statements of Lenin’s, and by hiding from the party other far more recent statements, by a direct falsification of party history and facts of yesterday, and still more important, by distorting and directly altering all the questions at present in dispute, the group of Stalin and Bukharin, departing farther and farther from the principles of Lenin, are trying to deceive the party into believing that this is a struggle between Leninism and Trotskyism. The struggle is, in actual fact, between Leninism and the opportunism of Stalin. In exactly the same way the revisionists, under pretence of a struggle against “Blanquism”, waged their battle against Marxism. Our whole-hearted joint struggle against the Stalin course has been possible only because we are all completely united in the desire and determination to defend the real Leninist proletarian course.

The present platform is the best answer to the accusation of “Trotskyism”. Every one who reads it through will know that it is based from the first to the last line on the teachings of Lenin. It is saturated with the genuine spirit of Bolshevism.

Let the party find out our real opinions. Let the party get acquainted with the genuine documents of our disagreements – and especially our disagreement upon that question of international historic importance, the Chinese revolution. Lenin taught us, in case of a disagreement, to believe nothing on anybody’s say-so, but to demand documents, listen to both of the contending sides, reject pretences, and find out conscientiously what the argument is about. We, the Opposition, repeat this advice of Lenin’s.

We must, once and for all, put an end to the very possibility of what happened at the Fourteenth Congress, when the disagreements were suddenly landed in the lap of the party two or three days before the congress. We must create the conditions for an honest dispute and an honest decision on the real subject of the disagreement, as this was always done during Lenin’s time.

1. See the Declaration by Zinoviev, Kamenev and Trotsky, December 15, 1926, at the seventh enlarged plenum of the Communist International, paragraph 1.