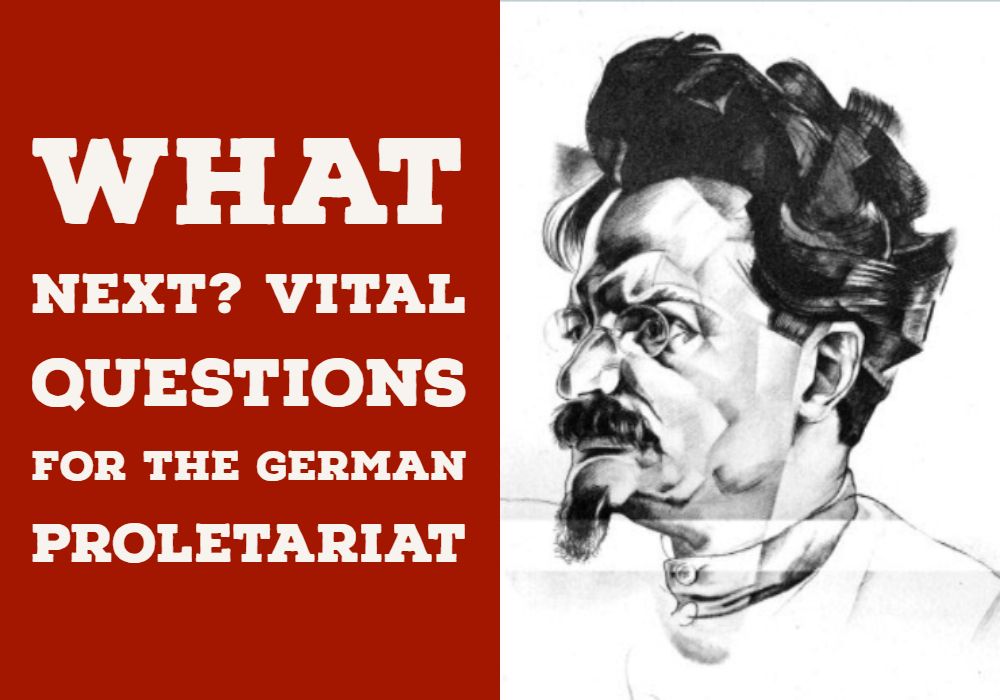 A cattle dealer once drove some bulls to the slaughterhouse. And the butcher came nigh with his sharp knife. “Let us close ranks and jack up this executioner on our horns,” suggested one of the bulls.

“If you please, in what way is the butcher any worse than the dealer who drove us hither with his cudgel?” replied the bulls, who had received their political education in Manuilsky’s institute.

“But we shall be able to attend to the dealer as well afterwards!”

“Nothing doing,” replied the bulls, firm in their principles, to the counsellor. “You are trying to shield our enemies from the left; you are a social-butcher yourself.” And they refused to close ranks.

“To put the liberation from the Peace of Versailles necessarily, absolutely, and immediately first in precedence to the liberation of other nations downtrodden by imperialism, from the yoke of imperialism—that is middle-class nationalism (worthy of Kautskys, Hilferdings, Otto Bauer & Co.) but not revolutionary internationalism” (Lenin, “Left-Wing” Communism: An Infantile Disorder).

What we need is the complete rejection of national Communism; an open and decisive liquidation of such slogans as “People’s Revolution” and “National Liberation.” Not “Down with the Versailles Treaty!” but “Long Live the Soviet United States of Europe!”

The socialist construction of the USSR is not a self-sufficient national process, but an integral part of the international revolution.

The conquest of power by the German and European proletariat is a task infinitely more real and immediate than the building of a closed and self-sufficient society within the boundaries of the USSR.

Unconditional defence of the USSR, the first workers’ state, against the inside and outside foes of the proletarian dictatorship!

But the defence of the USSR cannot be carried on with the eyes blindfolded. International proletarian control over the Soviet bureaucracy. Merciless exposure of its national-reformist and Thermidorean tendencies that find their generalisation in the theory of socialism in one country.

What does the Communist Party require?

The return to the strategical school of the first four congresses of the Comintern.

The rejection of ultimatism in relations with mass workers’ organisations; Communist leadership cannot be imposed; it can only be won.

The rejection of the theory of social fascism which aids both Social Democracy and fascism.

To us the criteria for appraising changes in political regimes of bourgeois rule are not the principles of formal democracy but the vital interests of proletarian democracy.

No direct or indirect support of Brüning’s regime!

“Class against class!” This means all organisations of the proletariat must take their place in the united front against the bourgeoisie.

“Class against class!” Indefatigable agitation must be conducted in order that the Social Democratic organisations and the reformist trade unions shall break with the perfidious bourgeois allies in the “Iron Front” and that they join in common with the Communists and all other organisations of the proletariat.

“Class against class!” Propaganda and organisational preparation for workers’ soviets, as the highest forms of the proletarian united front.

Full organisational and political independence of the Communist Party at all times and under all conditions.

No combining whatever of programs or banners. No unprincipled deals. Complete freedom of criticism of temporary allies.

The candidacy of Thälmann for the presidency is, self-evidently, the candidacy supported by the Left Opposition. In the struggle for the mobilisation of workers under the banner of the official Communist candidacy, the Bolshevik-Leninists must be in the front line.

The German Communists must take their inspiration not from the present regime in the CPSU, which reflects the domination of the apparatus on the foundation of a victorious revolution, but from that party regime which led to the victory of the revolution.

The liquidation of bossing by the apparatus within the German Communist Party is a life-and-death question.

There must be a return to party democracy.

Worker-Communists must attempt first of all to initiate an honest and serious discussion in the party on questions of strategy and tactics. The voice of the Left Opposition (Bolshevik-Leninists) must be heard by the party.

After a thorough discussion, the decisions must be passed by a freely elected special congress of the party.

A correct policy of the Communist Party in relation to the SAP should consist of an irreconcilable criticism (but conscientious, that is, corresponding to the facts) of the dual nature of its leadership; an attentive, comradely, and sensitive relation to the left wing—with a complete readiness for practical agreements with the SAP and for more intimate political ties with the revolutionary wing.

A sharp turn of the helm in the trade-union policy; a struggle against the reformist leadership on the basis of trade-union unity.

A systematically applied policy of the united front in industry. Agreements with reformist factory committees on the basis of a definite program of demands.

Fight for lower prices. Fight against lower wages. Switch this right onto the tracks of a campaign for workers’ control over production.

Campaign for collaboration with the USSR on the basis of a single economic plan.

A draft plan must be worked out by the respective organs of the USSR with the participation of interested organisations of the German proletariat.

Campaign for the change of Germany to socialism on the basis of such a plan.

They lie who say that the situation seems hopeless. Pessimists and skeptics must be driven out of the proletarian ranks, as carriers of a deadly infection. The inner forces of the German proletariat are inexhaustible. They will clear the road for themselves.