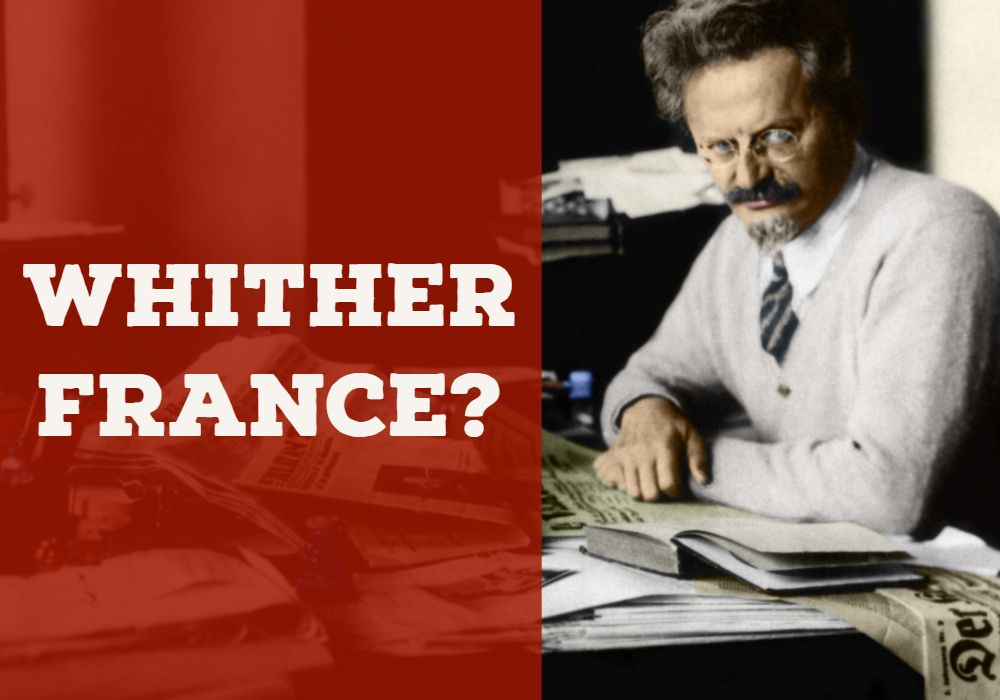 Preface to the 1936 French Edition

This pamphlet contains several articles written at different times during the past two and a half years; or to put it more accurately, from the emergence of the Fascist-Bonapartist-Royalist bloc on February 6, 1934 to the great mass strike of May-June, 1936. What a vast swing of the political pendulum! The leaders of the People’s Front are of course inclined to credit the foresight and wisdom of their policies for the swing to the left that has taken place. But that is not the case. The three-party cartel proved to be a third-rate factor in the development of the political crisis. The Communists, Socialists and Radicals foresaw nothing and directed nothing. Events broke over their heads. The unexpected (for them) blow of February 6, 1934 compelled them to ditch yesterday’s slogans and ideas and to seek salvation in an alliance with each other. Equally unexpected, the strike of May-June 1936 has dealt this parliamentary bloc a blow from which it cannot recover. That which superficially might seem to be the apogee of the People’s Front is in reality its dying agony.

In view of the fact that the various sections of this pamphlet appeared separately, reflecting the different stages of the crisis through which France was passing, the reader will find unavoidable repetitions in these pages. To eliminate them would mean to dislocate the structure of each section and, what is more important, would strip the work of its dynamic character, which reflects the dynamics of the events themselves. The author has chosen to retain these repetitions. They may even prove not entirely without use for the reader. We live in an epoch of the universal liquidation of Marxism in the ruling summits of the labour movement. The most vulgar prejudices now serve as the official doctrines for the political and trade-union leaders of the French working class. Contrariwise, the voice of revolutionary realism rings against this artificial sounding board like the voice of “sectarianism”. It is all the more insistently necessary to repeat over and over again the fundamental truths of Marxist policies before audiences of advanced workers.

Here, or in other occasional statements of the author, the reader may perhaps find isolated contradictions. We do not eliminate these either. In fact, these supposed “contradictions” reflect only the emphasis placed on different stages of the process. On the whole, we think this pamphlet has passed the test of events and, it may be, will prove capable of making them more readily understood.

The days of the great strike will undoubtedly also have the merit of airing out the musty, still atmosphere of the workers’ organizations, clearing it of the miasmas of reformism and patriotism, of the “Socialist”, “Communist” and “trade-union” varieties. Assuredly, this will not take place at once, nor by itself. Ahead lies a stubborn ideological struggle on the basis of harsh class struggle. But the subsequent course of the crisis will show that only Marxism provides a timely analysis of the interlocking of events and a timely forecast of their further development.

The February days of 1934 marked the first serious offensive of the united counter-revolution. The May-June days of 1936 herald the first mighty wave of proletarian revolution. These two milestones show the way in advance to two possible roads: the Italian or the Russian. Parliamentary democracy, in whose name the Blum government now functions, will be crushed into powder between these two great milestones. Whatever the specific stages to come, the transitional combinations and groupings, the partial attacks and retreats, the tactical episodes, there henceforth remains the choice only between Fascism and the proletarian revolution. That is the meaning of this book.