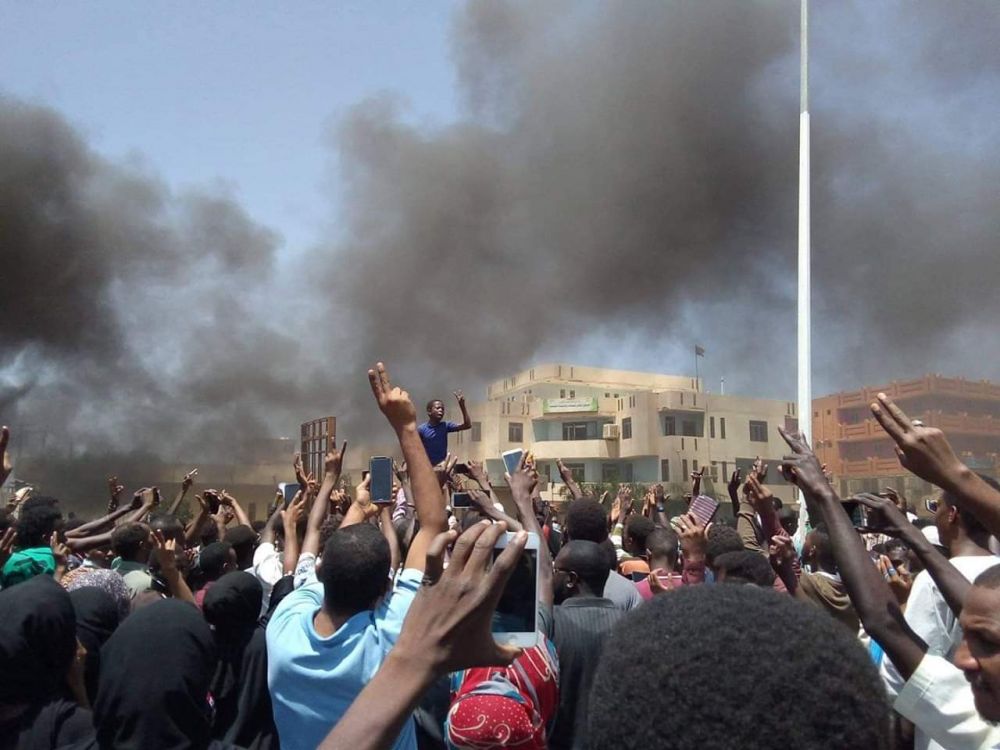 Early this morning, the Sudanese armed forces violently raided and cleared the revolutionary sit-in that had camped in front of the Sudanese Ministry of Defence since 6 April. This was only the start of a campaign of terror, organised by the counter-revolutionary Transitional Military Council (TMC).

At least 13 have been reported killed and hundreds more injured after the cold-blooded attack on the revolutionary campsite in Khartoum this morning. According to reports, last night, army ranks in the area around the site were partially withdrawn and replaced by the reactionary, tribal-based Rapid Support Forces (RSF) militia and riot police. Then, before carrying out the attack very early in the morning, the exits of the camp were closed and showers of live ammunition were unleashed on the peaceful protesters who were defiantly standing firm, chanting “Peaceful! Peaceful!” Following this, the armed forces proceeded to clear the campsite, burning the tents, beating up unarmed protesters and indiscriminately shooting with live ammunition. Meanwhile, snipers in the area would target anyone trying to film the events.

Militiamen had also gathered in other areas of the city, chasing protesters and attacking the barricades being erected. Both Al Mualim Hospital and Royal Care Hospital were reportedly besieged and injured protesters were attacked both inside the premises and as they were arriving. A particular campaign seems to have been aimed at the Colombia neighbourhood, which is renowned for being a relatively lawless area where alcohol and drugs are freely sold and consumed. These practices have increased after the downfall of Omar Bashir, a fact that has been used to whip up hysteria amongst loyalist Islamist militias and other reactionary forces, claiming that the revolution is merely an attack on Islam and therefore must be brought down.

#Sudan ??: video shot by one of the #RSF militants involved in the crackdown shows a protesters unconscious (if not dead) on the ground as nobody helps him.

But the victory of this counter-revolution is far from guaranteed. Speaking to Al Jazeera, a protester said:

"[The armed attackers] were shooting at everyone randomly and people were running for their lives. They blocked all roads, and most tents at the sit-in have been set on fire (...) People are very angry right now. They don't know what could happen next. Protesters have dispersed to other parts of the city. They are now on the streets protesting. Most people have blocked the roads in their neighbourhoods."

It appears that, far from having the intended effect of demoralising the movement, the attack is hardening the revolution and pushing it to take further steps. Anger is rife in every factory, neighbourhood and village. The Forces for Freedom and Change (FFC), which is led by the Sudanese Professional Association (SPA), has released a statement declaring:

“(...) an [open ended] political general strike and civil disobedience as of today, June 3, 2019, until the overthrow of the regime” [with an appeal] “(...) to the armed forces of the people and the police to do the duty of protecting the Sudanese people from the TMC's militias, shadow brigades and Janjaweeds and to side with the will of the people in overthrowing the regime and establishing a fully civilian transitional regime.”

The SPA has also called for all neighbourhoods, streets and bridges throughout the country to be occupied by revolutionaries.

It is unclear how successful the general strike has been, but reports have already surfaced from airports that all flights are being cancelled as pilots and baggage handlers go on strike.

Counter-revolution preparing for a showdown

It is clear that the present offensive of the counter-revolution has been prepared for a long time. On 13 May, RSF forces opened fire on the Khartoum sit-in, killing six people and injuring more than 200, while army soldiers stood aside. Since then, the TMC left negotiations over the future composition of the regime with the FFC, and began a campaign of daily attacks on the revolution, increasingly describing it as violent, despite the fact that the protests remained peaceful. All escalations of killing and violence unilaterally came from state-backed forces.

Throughout this period, Mohamed Hamdan Dagalo “Hemeti”, the leader of the RSF forces and the deputy in charge of the TMC, has been building up support for his own forces. Throughout the month of Ramadan, he has been demagogically catering to his base of militiamen, tribal chiefs and international contacts during his highly publicised Iftar events. Commenting on events in Sudan, he has been trying to pose as an opponent of Bashir, and yet a defender of stability and traditional values. Building up the morale of his counter-revolution, Hemeti and other leaders had been whipping up hysteria amongst his supporters and militiamen - who are often drafted amongst 15-16-year-old, uneducated tribesmen from extremely backward areas - claiming that the revolution is anti-Islamic. 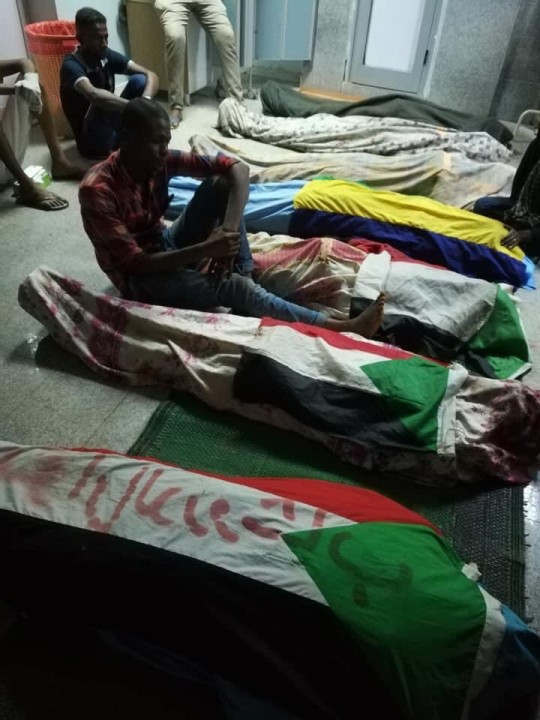 At least 13 have been reported killed and hundreds more injured after the cold-blooded attack on the revolutionary campsite in Khartoum this morning. The revolution must organise and defend itself! / Image: fair use

Along with his ally, and head of TMC, Abdel Fattah al-Burhan, Hemeti also visited a series of regional capitals in the last week. While Hemeti met with Saudi Crown Prince Mohammad bin Salman, Burhan visited Egypt and the United Arab Emirates - all heads of state who are dead set on crushing the revolution, of fear of it spreading to their own countries. It is likely that these trips saw the masters of the TMC give the final green light for moving against the revolution.

Since the powerful general strike last week, the TMC has increased the threatening rhetoric against the revolution, declaring on 30 June that: "The protest site has become unsafe and represents a danger to the revolution and the revolutionaries and threatens the coherence of the state and its national security." It is clear that the strike was a warning sign for the ruling class. They cannot allow the movement to gain any more confidence. During the general strike, huge parts of society, including all ministries, were de facto adhering only to the authority of the revolutionary organisations: the FFC, and the SPA at its head. At the same time, the military junta sees the hesitance of these organisations as a sign of weakness, and sees an opportunity to attack to consolidate its power.

Since then, it was clear that the TMC was preparing a counter-attack. In fact, the protesters in the Khartoum sit-in were well aware of the of this and had taken some precautions to defend themselves, such as building stronger barricades. But being completely unarmed meant that they did not stand a chance against battle-hardned, rabid RSF militiamen, who were armed to the teeth.

The revolution must advance

The brutality of the counter-revolution shows that the interests of the ruling class and the workers, peasants and poor of Sudan cannot be reconciled. The TMC and all of the tops of state apparatus belong to the same ruling class as that of Omar Bashir. It is the same class that has been draining the wealth of Sudan and terrorising its population for decades, while the country has been allowed to decay. They can only maintain their privileges and positions as long as the masses are atomised and subjugated.

Hemeti and his counter-revolutionary troops have appeared as the best-suited candidates of the ruling class for this purpose. Supported by the reactionary Saudi, Egyptian and Emirati ruling classes, as well as the reactionary local tribal chiefs, and flanked by the lumpen and tribal youth bought for a few hundred dollars a month and then brainwashed and moulded into amenable shock troops, he is preparing to “restore order” and crush the revolution.

#Sudan ??: protesters are out in the streets in defiance of the #TMC regime and the #RSF thugs.#مجزره_القياده_العامه pic.twitter.com/cxPznMIJcD

If he succeeds, it will be brutal. The revolution cannot afford to hesitate in this situation. The FFC has called an open-ended general strike. That is absolutely correct. All economic and practical levers of the ruling class must be paralysed by the mighty Sudanese workers and poor. The masses must be mobilised everywhere to fight back against the Junta. The strike committees should link up on local and national levels to coordinate the fight and isolate any counter-revolutionary activity as soon as possible.

At the same time, as a first step, each neighbourhood and strike committee must organise its own defence militias under the control of the committees, which should also be linked up on a local and national level to defend the movement against any attack.

Simultaneously, a systematic campaign must be organised in all areas to approach the soldiers and to win them over to the revolution. Without breaking the army on class lines, there can be no talk of defeating the counter-revolution. While the generals are all pure counter-revolutionaries, the rank-and-file soldiers are the brothers and children of the same people who have been fighting in the streets. In fact, repeatedly during the past months, they have sided with the revolution against attacks by reactionary militias. Revolutionary soldiers’ committees should be elected in every barrack and linked up with the workers’, peasants’ and neighbourhood committees.

As we can see, the forces of reaction will not hesitate to unleash a river of blood to defend their positions. But they stand no chance against the full force of the revolution. What is needed is a forceful and organised response. The movement must mobilise and organise all of its forces to take over all strategic areas such as communication, media, the banks and the commanding heights of the economy. At the same time, the heads of the TMC and anyone else who has been complicit in the crimes of the former regime, as well as crimes against the revolution, must be arrested.

A revolutionary general strike will pose the question of power clearly. But it will not solve it! If the revolution does not defeat the counter-revolution it will come back, even more violently. Striking alone and waiting for the generals to withdraw or “improve” their behaviour is utopian and will only lead to demoralisation, which in turn will open the way for a counter-offensive of the counter-revolution. The only logical conclusion of a revolutionary general strike is a revolutionary insurrection. There can be no more talk of talks and negotiations. Whether they want it or not, the leaders of the movement must call for an all-out offensive now, and to finally take power and discard the old rotten regime once and for all.

Down with the Junta!

Down with Hemeti and the RSF!

For a revolutionary insurrection to take down the TMC and the rest of the rotten Sudanese capitalist regime!