Details
In Defence of Marxism
03 February 2009

Share
Tweet
The workers of Guadeloupe, the French Colony in the Caribbean, have mobilised against the effects of the economic crisis. Since January 20, workers have been on a general. At the same time, the union together with a number of community organisations has organised a number of mobilisations that have rallied thousands of people. We publish here their appeal for international solidarity.

The workers of Guadeloupe, the French Colony in the Caribbean, has mobilised against the effects of the economic crisis. Since January 20, workers have been on a general strike in order to defend their living standards. At the same time, the union together with a number of community organisations has organised a number of mobilisations that have rallied thousands of people. 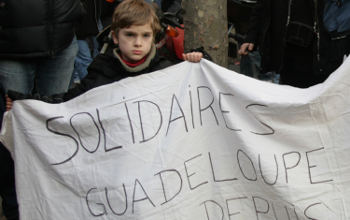 All over France mobilisations are ongoing against the Sarkozy government. Here one of the French protesters is showing his solidarity with Guadeloupe. Photo by Carole Kerbage on Flickr.

Guadeloupe is a French colony - or, as it is formally known an, "overseas region" - and has been since 1814. And like a true imperial power, the French state does not treat its colonial subjects well. The whole world is affected by the crisis of capitalism but as a result of the policies of French imperialism, Guadeloupe is particularly hard hit. The price of petrol, for example, is 50% higher than in France because of special taxation. Police repression is also tough. In 1967, over 100 workers were killed by the French authorities in an effort to stop trade union struggles.

The action in Guadeloupe has also to be seen in the wider context of mobilisations all over France against the Sarkozy government. The strikes and demonstrations that are taking place in France are a prelude to what, in the words of Sarkozy himself could become another "May 1968".

The workers of Guadeloupe have drawn up a list of 168 demands, including a 50 cent drop in fuel prices, an increase in the minimum wage to EUR200, a lowering of the price of water and public transport, the right to free education, a rent freeze, tax exemptions for farmers and investment in the decaying infrastructure.

A 25,000-strong demonstration was held last Saturday in Pointe-à-Pitre and the strike continues. According to reports, French authorities have sent heavily armed police to the island. The trade unions and other workers' organisations are now appealing for international solidarity against any attempts by the state to forcibly repress the movement

Video from the mobilisations

APPEAL by the UGTG to the International Democratic and Workers' Movements

The French colonial power is preparing to punish the workers, youth, and people of Guadeloupe and their organizations.

In response to the call of 47 trade unions, political organizations, consumer associations, popular cultural associations, a general strike began on January 20, 2009 ..., and a march was attended by more than 25,000 people in the streets of Pointe-à-Pitre.

In the platform of demands to the employers, the elected representatives of the State, the workers and people demand, among other things:

The bosses and elected officials have already expressed their desire not to meet the demands even before opening negotiations.

They want the workers to "be reasonable and to return to work."

The employers will start a lockout, aiming to push people toward confrontations and then ask the colonial power to suppress them. Thus, several hundred members of law enforcement arrived in Guadeloupe a few days ago, armed to the teeth.

This situation was seen in May 1967, when the French government killed more than 100 Guadeloupeans in response to a strike in the building trades. Always the same thing: they asked the striking workers to be reasonable, to return to work.

On behalf of the rights of workers and the people of Guadeloupe to fight for their legitimate demands, we call for international solidarity.

Send your messages to:

With a copy to: