Details
In Defence of Marxism
25 November 2008

Germany
Share
Tweet
The January 2009 commemoration of the assassination of Rosa Luxemburg and Karl Liebknecht at the cemetery where they are buried is expected to be very large. The IMT Winter School is combining a large variety of seminars with participation in the commemoration.

Ninety years ago the German revolution began with a naval mutiny in Kiel. Sailors and dockers surged through the streets and took control of the town. Within a week sailors', soldiers' and workers' councils sprung up in most of Germany's major towns, including Berlin. 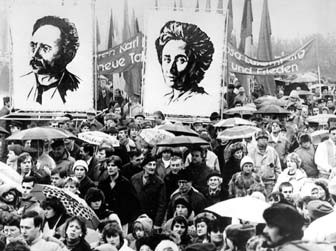 In order to crush the movement, the black forces of reaction decided that it had to be beheaded. In co-operation with the Social Democratic government minister Philipp Scheidemann an unofficial price of 100,000 German marks was put on the heads of Karl Liebknecht and Rosa Luxemburg.

On 15 January, 1919, they were arrested. Karl was shot, allegedly while trying to escape. Then an officer used his rifle butt to smash Rosa's skull. Her corpse was thrown into the Landwehr Canal. The German proletariat had lost two of its most outstanding leaders.

This year's commemoration demo at the cemetery where they are buried is expected to be very large. The IMT Winter School will combine a large variety of seminars with participation in the commemoration.

Already on Friday the 9th we will organise a walking tour "History of 20th century Berlin" (starts at 2pm).

Accommodation and the seminars will be at a hostel. The cost for two nights, sheets, three warm meals, two breakfasts and all the meeting rooms is only 55 Euros per person. For those that do not need accommodation the price of the school on Saturday will be 10 Euros including lunch or 15 including dinner.