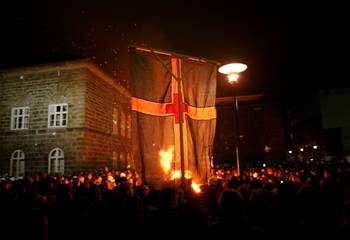 In yet another turn of the IceSave saga, the people of Iceland are to vote on Saturday in yet another referendum on whether to accept collective responsibility for the debts of the failed Icelandic bank IceSave. We have received a following letter from a group of Icelanders which we republish here with our comments.

In December 2009, the Icelandic parliament attempted to saddle its people with the debts amounting to £3.6 billion, or £11,700 per Icelander to cover for IceSave deposits. The people of Iceland have since persistently refused to approve any plans by the Icelandic government to accept liability. We wrote about the sorry affair in detail in January last year, arguing for a rejection of the proposed treaty. Since then, the Icelanders rejected the initial proposal and a new one has been reached with the UK and the Netherlands.

We have not been able to study details of the new proposal but the principle involved is fairly clear. The UK and the Netherlands are both facing serious difficulties with their state finances and are having difficulties implementing the cuts that they see as necessary to balance the books. The latest demonstration of half a million workers and youth in London shows precisely this. The bosses are asking the working class to pay for the crisis and the workers are beginning to fight back. Clearly the British and Dutch governments are trying to offload some of their own domestic problems on Iceland by making them cover the IceSave deposits.

To this end they have bullied the island with anti-terror legislation, freezing of assets and other measures. This behaviour is disgraceful and only serves to plunge the Icelandic economy into further misery.

The point that we made a year ago, before the last referendum, is that working class people must unite across borders against the austerity packages that the crisis have brought about. The crisis that we face is not a crisis of the banking system or a crisis of a particular nation state. It is not caused, as the Capitalist press would have it, by workers “living beyond their means”, whether in Iceland or in Britain. It is a global crisis of Capitalism. Therefore, the Icelanders can not put their trust in the European Union or any of the European governments. They are clearly prepared to take all kinds of austerity measures against their own population, never mind someone else's. The Icelanders would do right to refuse to repay this debt. They should make an appeal to the workers of Europe who will be sympathetic to such a stance, much more so than the heads of the European Union. The struggles against austerity in Greece, Ireland, France, Portugal etc. show that the people of Iceland are not alone.

The letter below explains well how the British and Dutch governments are running roughshod over international law and treaties. It also explains some of the consequences of their actions and the proposed treaty that is to be voted on this coming Saturday.

A group of Icelandic citizens  wrote the President of the EU the attached letter. In it we briefly went over the Icesave in present and past and ask the officials of EU and EFTA questions about the legal side of the contract, its precedent and the effects if present agreement will be rejected.

The group that stands behind this letter has the common goal to stand against the plan to transport debts of private companies over to the common  public. The letter is written with the purpose to draw attention to the Icesave dispute and the consequences it will have on the public of Iceland and it’s finances, to bear the debt that will follow if the Icesave contract will be agreed upon. The consequences do not only concern the Icelandic nation because if this contract will be forced upon us we have a precedents for all other nations in the world.

It’s not only the president of the EU that will get this letter. A copy has been sent to several officials within the EU and the EFTA, the concerning ministeries of the United Kingdom, the Netherlands and Iceland and additionally to both Icelandic and several foreign media.

With regards on behalf of the group,

The Icelandic banks (90%) collapsed in autumn 2008 and with the banks Landbanki's subsidiaries in London and Amsterdam (the Icesave deposits). According to the principal rule of the European Economic Area Treaty, the concept of market equality is the basis of co-operation within the European Community as stated in the Agreement on the EEA Part I: Objectives and principles, article 2, item e:

„the setting up of a system ensuring that competition is not distorted and that the rules thereon are equally respected…”. (Highlighted by signatories)

It is clearly stated that the principal rule of the EEU co-operation is to prevent distortion of competition. In this light, British and Dutch authorities were obliged to ensure that Landsbanki branches in London and Amsterdam had satisfactory securities from The Depositors’ and Investors’ Guarantee Funds within their own borders. If that were not the case, it would have been marketing distortion.

The United Kingdom and the Netherlands unilaterally decided to make the Icesave deposits a political issue instead of a legal one. On that basis, they have demanded that Icelandic taxpayers pay the Icesave deposits which under EU regulations should have been covered by British and Dutch Depositors‘ and Investors‘ Guarantee Funds, as is clearly stated in European Economic Area treaty.

The first reaction of the Icelandic government was that Iceland was being bullied and the Icesave dispute should be resolved in courts. The United Kingdom and the Netherlands refused but prior to that the British government had taken the unprecedented action to use anti-terrorism legislation against Iceland and Landsbanki. As a consequence, Kaupthing bank operations (Singer & Friedlander) in The United Kingdom were closed down and with it fell Iceland‘s biggest bank.

Due to these harsh actions taken by British and Dutch governments all flow of capital to and from Iceland was stopped. Iceland state finances were taken hostage by a foreign power. As a consequence, Iceland was forced to negotiate the Icesave deposits if the country was to get assistance from the International Monetary Fund. The IMF demanded that Iceland negotiated the Icesave deposits due to pressure from The United Kingdom, the Netherlands and the European Union countries.

The current Icesave agreement can cost Iceland up to half of its state budget. If the Emergency law of October 2008 will not stand up in court of laws, the Icesave deposits will amount to double state budget. The people of Iceland have found it hard to accept being forced to pay for actions made by reckless and irresponsible bankers: burdens which according to EEA-regulations actually belong to British and Dutch Depositors’ and Investors’ Guarantee Funds as applied to fair and equal competition within the European Economic Area.

The Icelandic nation will vote in a referendum on the latest Icesave-agreement on the 9th of April 2011. We refused to accept the last one in a referendum. We therefore feel compelled to get answers to the following questions before the referendum.

Sincerely and with requests for good answers

Answers and/or questions should be sent to